Arturo Escobar: Designs for the Pluriverse: Radical Interdependence, Autonomy, and the Making of Worlds 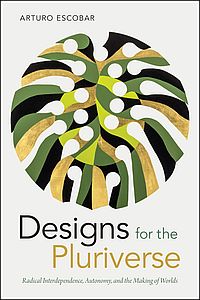 "Designs for the Pluriverse" is a book on the political economy of design and on the cultural politics of design (36). The author mentions political ecology as one of his main fields of research. Influenced by Foucauldian poststructuralism and Heideggerian phenomenology, he attempts to introduce an "ontological" or "politico-ontological" (1) research programme for design studies contextualising design practice in social and environmental issues.

The book starts with a reference to Victor Papanek's well known critical remark that industrial design has been and still is in bondage with technocratism (1). [1] Escobar's goal is to develop design from an economy driven design via a transitional design to a so-called "ontological design". Ontologically orientated design "could be design for, and from autonomy" (167). Ontological design means that design approaches are grounded in people's realities of life (1).

Escobar suggests a theoretical framework for autonomous design and presents case studies. He reevaluates design studies against the background of postcolonial, ecological and feminist points of view. Methodological issues and potentials of transitional design methods are analysed. He deals with epistemic decolonisiation design study paradigms (224) aiming to create a decolonial future (206). Escobar describes communal economy and a system controlled by collectivities (180).

The author renounces concepts of design characterised by Western elitist thinking and relocates design theories and practices within the South's context (6). "A main goal of the book is to ask whether design can actually contribute to enabling the communal forms of autonomy that underlie these transition visions and Life Projects." (x) He demands a reorientation of design away from functionalist, rationalistic and industrial traditions towards a systemic and ontological approach "attuned to the relational dimensions of life" (x).

The author adopts a relational perspective on reality and the real world. In the context of design this means that knowledge of ontological design influences theories of life (111). Acting, language and speech are considered to be powerful tools of ontological design (113). Examples of relational ontology are (i) efforts to protect Mangrove forests in Colombia, (ii) marches in Colombia against destructive gold mining, (iii) struggles in defense of territories of indigenous people in the Norte del Cauca region of Colombia, and (iv) activities to preserve ritual and symbolic functions of a territory in Colombia (70-75).

Escobar's concept of ontological design is clearly recognisable in his description of the Cauca Valley in Columbia (191). Electrification and water regulation for agroindustrial complexes and sugar cane industries along the river have been praised as a miracle of development. For workers and cutters the opposite is the case. Sugar cane there is a monster (193). A cooperative design project, the Cauca River Valley Transition Project, intends to establish design spaces and codesign teams. "In this dialogic space, design coalitions would create a new, radical vision for the valley and a vision for large-scale change, well beyond the business-as-usual adjustments." (195)

The book is an outcry demanding "convivial" design practices (206) instead of fountainheaded quixotisms. Escobar's vision is a "Diso&#241ar" (Designing-Dreaming, 213) where designers can "catalyze, the emergent transitions in their own locations through situated transition design practices" (203). Northern transition design visions "think decolonially and postdevelopmentally, [...]", whereas "autonomous design, diseños otros, and design from the South need to broach the questions of innovation, and technoscience in earnest." (208) Escobar concludes that transition design, design for social innovation, autonomous design can become "an open invitation for us all to become mindful and effective weavers of the mesh of life" (215) respecting Mother Earth.

In spite of dealing with issues of ecology, environment protection, ethics and sustainability, the book doesn't really refer to "Design for the Real World", but reminds the reader of Victor Papanek's last book, "The Green Imperative", 1995. Tomás Maldonado's early work on design as a critical tool in ecology should be mentioned. [2] Escobar's "ontology of separation" (1, 220) via virtual media, interpassivity, etc. is consistent in many parts with Matthew Crawford's account of "reclaiming the real" within craft and design work. [3] Embedding design approaches into people's realities also means including politically orientated design, e.g. First Things First Activism or Fashion Revolution Day, to reform design from this starting point. Escobar's attempt to integrate indigenous thought into design methods has some characteristics in common with John Croft's "Dragon Dreaming" [4] approach of adapting and implementing Aboriginal knowledge.

Considering the "liberation of Mother Earth as a fundamental transition design principle" (204) implicates a critical perspective on the human created anthropocene. The pluriverse can even be considered as an alternative to the anthropocene (190). Rain forest occupation and resistance against oil palm plantations are examples for an ontological struggle for the enhancement of the pluriverse (70). High hopes on pluriversal design practices correspond with Michel Serres' concept of natural law. The social contract of mankind should be complemented with a natural contract. [5]

In relation to the concept of modernity, the question is whether progress which Escobar refers to reaches beyond the issues which Jürgen Habermas discusses in his paper on modernity. The project of modernity consists of the development of objectivating sciences, of the foundations of morality and law, and of autonomous art. (6) Habermas states that the quality of works of art has been "determined quite independently of any connections it might have with our practical relations to life." [7] Starting from this presupposition, it can be concluded that Modern Cultures conceive the world as an inanimate surface to be occupied, whereas Relational Cultures conceive the world as a place that is alive (87).

Against a rationalist and modernist background, "Euro-modernity" emerged as a dominant form of design, capitalist, rationalist, liberal, secular, patriarchal, white (67). Design can be regarded as a "white-western-men syndrome" [8] dominated by nonrelationist thinking within "patriarchal and capitalistic technological imaginations" (221). Questioning the Western concept of modernity, Escobar wants to build bridges between transition design visions in the Global North and the Global South (205).

[3] Matthew Crawford: The World Beyond Your Head: On Becoming an Individual in an Age of Distraction, New York 2015, 27.

[5] "That means we must add to the exclusively social contract a natural contract of symbiosis and reciprocity in which our relationship to things would set aside mastery and possession in favor of admiring attention, reciprocity, contemplation, and respect; where knowledge would no longer imply property, nor action mastery, nor would property and mastery imply their excremental results and origins." Michel Serres: The Natural Contract, Michigan Press 1995, 38.

[8] As entered by an anonymous person into the real time life blog during Arturo Escobar's key note speech at the Design Research Society 2018 Conference.