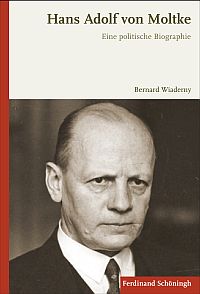 In less than two decades between the First World War and the establishment of the 'Third Reich', Germany transitioned from monarchy to democracy to totalitarian state. In this exceptionally detailed political biography of Hans Adolf von Moltke (1884-1943), Bernard Wiaderny gives readers an opportunity to contemplate Germany's political transformations through the life story of a man who was raised in the German Empire, witnessed its downfall and, for the most part of his diplomatic career, represented the Weimar Republic and the 'Third Reich' in Poland.

Wiaderny relies on extensive biographical research and intriguingly narrates the life of Moltke from his upbringing in the conservative Prussian tradition to the struggle of balancing belligerent Nazi ambitions with his own pacifistic convictions. In this way, the author manages to strip away any prejudice against Moltke as the Nazi government's ambassador and provides a comprehensive account of his difficult role in mediating between Germany and Poland throughout the 1930s as he strove to forestall a war within the strict confines of his official position.

By virtue of his educational background and heritage as a Prussian elite, Moltke espoused conservative views and advocated an eventual revision of the Treaty of Versailles. However, he envisioned the recovery of Germany's lost territories only by peaceful means - primarily by improving economic and cultural relations and by preserving the German minority abroad. Wiaderny explains that Moltke's political thinking was shaped by two ideational concepts: Middle-Europe (Mitteleuropa) and culture-bearing (Kulturträgertum) (250). In accordance with these concepts, the ambassador believed that Germany was fated to play a dominant role as the bearer of culture and civilization in East-Central Europe, notably Poland, which Moltke regarded as a culturally inferior country.

When the National Socialists rose to power and the 'Third Reich' replaced the Weimar Republic, Moltke remained in the Foreign Office. Until the late 1930s, his approach largely correlated with Nazi foreign policy goals. Moltke shared a vision of restoring Germany's great power status by means of non-military territorial revisionism and fostered the idea of refocusing the attention on Eastern Europe as Germany's desired sphere of economic, cultural and political influence. In order to increase the Reich's power in Poland Moltke was passionately engaged in German-Polish cultural diplomacy and facilitated the Reich's strategy of protecting and economically strengthening the German minority abroad.

In March 1939, Adolf Hitler's thrust to the East signaled a change of political course: he resolved to go to war and conquer Eastern Europe. This decisive shift to an aggressive foreign policy clashed with Moltke's beliefs. In the months preceding the outbreak of the Second World War, the ambassador attempted to dissuade Nazi leaders from annexing Danzig, a major point of contention between Germany and Poland, and encouraged Polish diplomats to withstand the Reich's assertive territorial claims. Nonetheless, Wiaderny observes that while Moltke dissented from the hostile Nazi policy, his diplomatic efforts cannot be described as resistance, because he did not intend to bring the regime down, nor did he join the conservative opposition (92, 173).

Herein lies the tension in Moltke's character: the diplomat disapproved of both the war and the revolution against the regime, which, in the context of Nazi determination to annihilate its perceived enemies, became impossible to reconcile. Disappointed as he was in his government's destructive and racial politics, its disregard for the German past and neglect of conservative values, Moltke conformed to the regime's demands. After his diplomatic mission in Poland had been terminated at the onset of the war, Moltke continued to work for the Nazi government. He helped its propaganda machine to portray Germany as a peace-loving state, which had allegedly been provoked by Poland and Great Britain to engage in hostilities.

Moltke's refusal to publicly oppose the dictatorship's unchecked aggression despite his own proclaimed belief in the peaceful restoration of the Greater Germany could well be seen as cowardice and sheer opportunism. However, Wiaderny's painstaking study of Moltke's life, which extended through the most turbulent decades of German history, prompts a different consideration. The diplomat's hesitant compliance with the Nazi regime conflicted with his desire for peace but fitted the traditional Prussian worldview, which fundamentally rested on the values of national unity and loyalty to the state. The "rational republicans" (Vernunftrepublikaner) of the Weimar Republic, most notably Gustav Stresemann, remained monarchists at heart notwithstanding their pragmatic conversion to supporters of the democratic state. Even more contradictory was Moltke who, undeterred by his pacifistic stance, carried on as a servant of the totalitarian government, if not by reason then out of a sense of political and personal necessity.

While it is impossible to reconstruct with certainty the thinking underpinning Moltke's actions, Wiaderny's solidly researched political biography presents a nuanced perspective of the diplomat's moral dilemmas, thereby illuminating the complexity underlying his choices. It thus makes a remarkable contribution to the scholarship on the predicament of traditional conservative elites during Germany's political transitions and their role inside the 'Third Reich's' power structure.