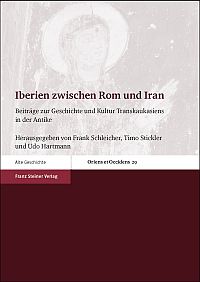 Ancient Iberia (centred on eastern Georgia), much neglected despite its strategic significance, is central to this edited volume arising from a conference at Jena in 2016. Iberia controlled one of the main passes across the Caucasus, Europe's highest mountain range, used repeatedly by mounted forces to launch invasions into Transcaucasia and Roman and Parthian/Sasanian territories in the Near East. Colchis/Lazica in the west furthermore had access to the Black Sea. Would the Sasanians have been capable of launching a seaborne attack on the capital city Constantinople (7)? The editors leave this intriguing question unanswered. The extensive naval operations of the Goths across the Black Sea in the later 3rd century certainly indicate that such a mission was not beyond the realms of possibility. The later Sasanian sea-borne conquest of Yemen in the 570s [1], the naval mission against Rhodes in the 620s [2], not to mention extensive maritime trade [3], suggest that the Sasanian Empire was not only a formidable land-based power. Little wonder that the major powers in west and east both vied for direct or indirect control of the Black Sea ports and Transcaucasian traffic.

The first Roman general to campaign in Iberia was Pompey, a pioneering mission discussed by Balbina Bäbler. Was a probable marching camp in eastern Georgia, perhaps the easternmost such installation found to date, once occupied by the troops of Pompey or P. Canidius Crassus in 65 or 36 BC (18)? Bäbler is undecided. Yet, other archaeologically identified marching camps tend to be of early or high imperial date, making one wonder if an attribution to the 1st or 2nd centuries AD, when Roman troops were again operating in the area, is not perhaps more probable. In an authoritative chapter on the Historia Augusta, Udo Hartmann argues convincingly that the alleged offer of a coalition of Bactrians, Iberians, Albanians and Tauroscythians to free Valerian from Persian captivity [4] is fictional. Shapur had already established control over Transcaucasia at the time (40-9). Also problematic is the chronology of Iberian kingship, based largely on the medieval Georgian chronicles, as pointed out by Frank Schleicher. Schleicher also offers an interesting summary of the Sasanian campaigns of the 6th century, postulating that Kavad's seizure of the Dariali Pass necessitated a massive reorganisation of territory and supply networks on the southern approaches (86-7). Dariali Fort had, however, been under Persian control since the late 4th century (and, if archaeologically unproven, probably already in the later 3rd century). The supply system must have originated then [5] long before Kavad's reconquest of Dariali Gorge after its temporary loss to northerners. Was the Sasanian Empire a victim of the invasions of the Sabir Huns, stimulating the construction of fortifications in the Caucasus (86)? In c. AD 515 and 531, these invasions affected mainly or exclusively Roman territories. Perhaps it was the other way round: Persian fortifications may have enabled Kavad, once he had re-established control over Dariali, to use the Sabir Huns in proxy-wars against Rome. Indeed, there are numerous examples from the 1st to the 13th centuries that the masters of the Caucasus passes employed northern allies against their enemies. [6] Schleicher makes a powerful case for increased Sasanian involvement in Iberia in the mid-6th century. Already much earlier, the Sasanians mostly succeeded in preventing Trans-Caucasian raids, as is rightly emphasised by Henning Börm (110-111); we know of no major Hunnic incursion across the Caucasus to affect the heartlands of the Sasanian Empire after the 390s. The detailed accounts offered by Procopius, discussed by Timo Stickler (153-77), of Persian and Roman military engagement in Iberia and Lazica provides a fitting conclusion to the first section of the book devoted to military and political history.

Culture and religion are central to section 2. Christianity has shaped the culture of Iberia and Georgia from Late Antiquity to the present day, but when precisely was Iberian royalty converted and how long did it take for Christianity to become the dominant religion across Iberia? Stephen Rapp shows that royalty and ecclesiastical authorities in medieval Georgia and Armenia, as in Ethiopia, had powerful motives to postulate early Christianisation. Conversion stories were modified from the 7th century onwards; parity with Byzantium and independent status were 'ostensibly grounded in the first royal conversions to occur anywhere upon the Earth' (193). Rapp also argues persuasively that conversion will have taken centuries (182), an assessment echoed by Josef Rist (201-21). Rist touches upon Christian burial practice, and systematic work on its spread may well enable us to gain a better understanding of the chronology. Some of the following chapters venture beyond Transcaucasia. Of particular interest is Armenuhi Drost-Abgarjan's survey of the image of the Iberians in Armenian literature of the 5th-7th centuries, of value more for this period than earlier times. Agathangelos' anachronistic report of a Hunnic invasion reaching the gates of Ctesiphon in the 3rd century may well have been inspired by the events of AD 395, and does not prove the hypothesis that there was an alliance between Iberians, Albanians and Armenians as early as the AD 250s (245). Shared Christian faith, Jan-Markus Kötter argues persuasively, was often just used to legitimise alliances when these were politically opportune (304).

Archaeological case studies are the subject of the final section of the book. Nodar Baxtaże's pioneering work at Nekresi has unearthed some of Iberia's earliest churches, one of them built over a temple. Focusing on the region of Dmanisi and Bolnisi, Annegret Plontke-Lüning presents early ecclesiastical architecture, Georgian inscriptions and steles featuring aristocrats wearing Persian dress - encapsulating the multiple influences that shaped the emerging culture of Christian Iberia.

Iberia was central to relations between the Roman west, the Persian east and the northern steppe world. Jointly with Armenia, Iberia/Georgia is the easternmost state in which Christianity has been the dominant religion from Late Antiquity to modernity. Side-lined for far too long, this edited volume makes a powerful case that it played a pivotal role in ancient and late antique military and religious history.

[5] Eberhard W. Sauer et al.: Dariali: the Caspian Gates in the Caucasus from Antiquity to the Age of the Huns and the Middle Ages: The Joint Georgian-British Dariali Gorge Excavations & Surveys, 2013-2016, Oxford forthc. 2020.