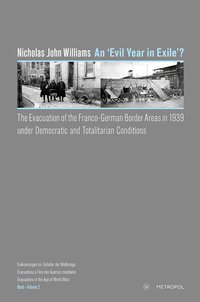 For historians of Britain, the process of evacuation during the Second World War involved the removal of, mostly, children from urban areas thought to be under threat from aerial bombing. Plans had been in place for a number of years before the conflict broke out. How the evacuation was carried out, and with what consequences, has been the subject of considerable debate. But there can be no doubt that it influenced British perceptions of the domestic experience of war, and continues to do so to this day.

The experiences of France and Germany were, though, at least in some respects rather different, as Nicholas Williams admirably demonstrates in this exhaustively researched, closely argued, book. In the light of the comments above, it is revealing that Professor Hudemann, in his "Preface", remarks that "Williams's British view 'from the outside' becomes apparent [...] in the leading questions he develops" (11). The volume itself is in eight parts, plus a summary Conclusion and various Appendices. It also contains a historiographical Introduction. The latter reflects carefully on what we mean by "evacuation", how we might go about studying it, and what it can tell us about, respectively, France under the Third Republic, and Germany under the 'Third Reich'. It also discusses the origins of the broader project of which this volume is one part - "Les évacuations dans l'espace frontalier franco-allemand 1939-1945" (36). One of the problems encountered by the author, which he has, for the most part, dealt with well, is the often fragmentary nature of the sources available to him. Unsurprisingly, many local records simply did not survive the upheavals of total war and its aftermath. Personal recollections, and accounts based upon them, meanwhile, can be highly compromised. As Williams notes later in the text, German propaganda sought to portray the French evacuation process as shambolic, not least when compared to its own, and to some degree this has entered popular mythology, notwithstanding that many such recollections do not bear any kind of close scrutiny.

The remainder of the book consists of detailed analysis of how France and Germany faced up to the problem of what to do with, especially, border areas in the event of war; how this worked out when the conflict actually started; the evacuee experience; and what happened when the need for evacuation came to an end. So, for example, were the border areas to be treated as economic/military resources and priorities, or should the emphasis be on getting civilians (themselves, in certain circumstances, "resources") out of the way of both invading, and retreating, armies? Such questions had been in the minds of both civilian and military authorities during the inter-war period, and one of the strengths of Williams's book is how he illustrates, in detail, how such views could fluctuate, as well as being a source of tension within the respective regimes. Indeed, the inter-war period, the subject of the volume's first substantive section, was, as the author shows, unsurprisingly heavily influenced by the experience of the First World War. The era can thus be viewed, potentially at least, as, in Williams's phraseology, "A Thirty Years War with refugee movements" (49).

As to evacuee experience, this might vary considerably. Journeys out of evacuated areas were, with few exceptions, highly uncomfortable. And, notwithstanding rhetoric about, for example, national communities and social solidarity, newcomers were not always welcome in reception areas. As Williams points out, in the autumn of 1939 the German authorities evacuated up to one million civilians from the Saarland, the Palatinate, the Rhineland, and Baden, while their French counterparts moved around 600,000 civilians from Alsace and the département of the Moselle. Clearly, these were major population shifts, disruptive for those being evacuated, and for those areas receiving them. So, for instance, while in some case Saarlanders found "warm welcome and accommodating families", with whom friendships were made which would last generations, for others "the reception was hostile, and the mood remained hostile for the whole duration of their internal exile" (354). In south-west France, meanwhile, there were persistent complaints from evacuees about accommodation, and particularly overcrowding. To be fair to the authorities, this was, almost by definition, a problem in all nations undertaking evacuation processes, and in the particular case south-west France, steps were taken to address the issue. But however many palliatives were put in place, evacuation was a disturbing, and often unpleasant, experience for many, and had long-term cultural, and psychological, consequences.

As the book's sub-title makes clear, one of Williams's aims was to show in what ways, if any, the evacuation experience differed for those from a "totalitarian" state to those from a democratic state. This is a complex question, dealt with variously throughout the book. But, in summing up, Williams returns to two important points: the "republican administrative tradition in France", and the competing agencies and forces within supposedly "totalitarian" Germany. The latter is, of course, part of a wider debate about the nature of the Nazi regime. But, the author suggests, "the overall process in France was smoother, chiefly due to a more efficient administration" (543).

So this volume makes a notable, and highly original, contribution not only to the evacuation process, but also to wartime history more generally. It will be an important resource for, in particular, historians of France and Germany, highlighting, as it does, the various mechanisms, successful and otherwise, in place at the outbreak of war. It also, of course, has much to tell us about the nature of the regimes which devised those mechanisms.