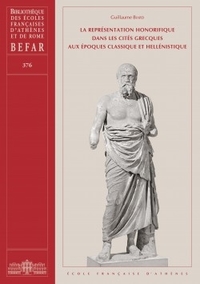 La Représentation Honorifique dans les cités grecques aux époques classique et hellénistique deals with an impressive wealth of evidence: statues of civic benefactors (in various guises), kings, generals, women, children, group monuments, statue bases, fittings on the top of bases, inscribed decrees and, to a lesser degree, reliefs and paintings are all extensively discussed. Biard displays a rare competence in dealing with epigraphy, literary sources and sculpture, considering hundreds of inscriptions and (pieces of) statues, as well as dozens of literary sources and statue bases. The majority of the evidence dealt with comes from Asia Minor and the Cyclades though there is some attention for mainland Greece, particularly for Athens, Delphi and Olympia. The book makes a valuable contribution to our understanding of Greek honorific practices, a subject that has become extremely popular in recent years.

The book consists of thirteen chapters, divided into three parts, plus an introduction and conclusion. Part One addresses the historical context. Its three chapters, in turn, discuss the relationship between representations and other types of honorific practice, trace the history of making representations of individuals, and (possibly the book's most important chapter) explore the ambiguities between different types of representation. Part two deals with honorific representations as physical objects. Biard's term is "Étude Matérielle" but the discussion is not restricted to physical evidence and also draws on written sources. The first chapter of Part Two considers the different media of representation: paintings, reliefs and, especially, statues in bronze and marble. Part Two's other three chapters address where representations (again mainly statues) were set up, types of statue bases and fittings for attaching statues to bases. Part Three's six chapters examine the iconography of different types of statue ranging from cuirassed generals to himation men to women and children. Much of this discussion of sculpture highlights how much ink has been spilled trying to attribute pieces to famous artists or subjects, an aim that Biard himself is wisely sceptical of unless there is hard evidence.

Biard's understanding of 'honorific' representations is far broader than those bestowed by the demos or boule and conventionally referred to as "public". He is interested in any representation set up by any other individual or group in order to honour somebody else (11). This usefully allows him to explore overlaps of meaning between different types of monument. The downside is that it creates problems of what to include and how to organise so disparate a range of material. Biard's solution - to attack the subject thematically - is not without its drawbacks. So much evidence is presented that it sometimes feels as though completeness is a goal in itself and Biard's interpretative vision at times becomes lost amid lengthy descriptions and discussions of details. For instance, his point, that much can be gained by looking at monuments in their entirety - statues, inscriptions, bases and setting - could have been made more convincingly by taking individual monuments as case studies rather than by discussing these elements in separate chapters.

As suggested above Biard's most important idea, set out in Chapter 3 but argued throughout, is that modern attempts to isolate discrete categories of Greek portraits (honorific, private, cultic, votive etc.) miss an important fluidity and ambiguity between different types of representation. Biard shows that no medium, mode of representation, type of base or location was unique to honorific monuments - or indeed to any type of representation. At times, particularly in Part Three, Biard rather undermines his own argument by insisting that some indeterminate piece of sculpture deserves inclusion in the book because it definitely was 'honorific'. If Biard is right - and he convinces me that he is - then we should not be able to easily distinguish honorific sculpture. And nor could the Greeks. I also wondered if Biard might have pushed the implications of his insight further to, for example, consider how votive, cultic or funerary representations might have lent public honorific statues a sacred meaning but Biard is less interested in religion and sees representations above all as 'social monuments' (1). This emphasises their political aspect.

Politics leads us to the book with which the volume naturally invites comparison, John Ma's 2013 Statues and Cities [1], a book of very similar scope (though with perhaps more epigraphy and less sculpture) and which takes a decidedly political perspective. Biard's book is a reworking of his PhD thesis, which means that his research began while Ma was still writing his book. For the monograph Biard has read Ma and cites him approvingly. The two authors largely agree on the origins of honorific representations: an Archaic aristocratic desire for self-commemoration through sculpture was harnessed to democratic ends in fourth century Athens and thereafter spread to the rest of the Greek world. However, for the Hellenistic period, which is where most of the evidence comes from, while Ma makes very clear where he stands in the persistent controversy about the nature of power in the post-Classical polis. Biard does not. Ma takes Hellenistic democracy seriously and sees the proliferation of honorific statues as a mechanism for reinforcing a communitarian ethos. Biard ascribes certain developments in the statuary habit - the increasing popularity of nudity, larger than life statues, cultic honours paid to statues - to oligarchization but on the whole his is a broad-brush approach that tends toward generalizations about Greek culture. Again, organising the book differently - moving some of the description to a catalogue and structuring the discussion around places and/or periods - might have brought Biard's own take on cultural and political history more to the fore.

More troubling is the scant attention paid to Roman influence on the statuary habit, especially since the book considers developments generally associated with Rome, such as verrism and even togate statues, and devotes considerable space to Delos. I am sympathetic to Biard's argument that Greek and Roman culture intertwined to create an eastern Mediterranean koinē in the second half of the Hellenistic period but that argument appears very late in the book (380) where it feels like an afterthought and only strengthens the impression that the issue should have been addressed head on and in detail.

The book makes a first class reference work since it discusses so many monuments and gives extensive references to previous work. Hopefully prospective readers will not be misled by the title to suppose that it only covers "public" honorific monuments because, in effect, its scope includes almost everything that would normally be classed as portraiture. Biard does not clearly state how he defined his corpus but it is hard to think of a portrait statue known from epigraphy, literary sources, or inscriptions from his period and area of focus that is not at least referred to somewhere. The book's organisation makes it easy to find discussions of particular pieces. It includes five tables (64 pages) of statues and paintings categorised by known location and material, separate indices of literary sources and inscriptions referred to (4 and 14 pages respectively), and of monuments, people and places mentioned. There is also a general index.

The book is certainly not, however, just a reference work. It is a thoughtful study that proposes new interpretations of many individual monuments and deepens our understanding of Greek representational practices. Above all it is to be hoped that Biard's critiques of the desire to pigeonhole different types of representation will generate discussion and stimulate more research in this direction.