R. M. Thomson: The Fox and the Bees 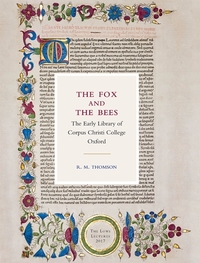 What we have here is an expanded version of the three triennial Lowe Lectures delivered by Rodney Thomson, Emeritus Professor of Medieval History at the University of Tasmania, in February 2017. The lectures are named after the celebrated palaeographer, E. A. Lowe, who was an Honorary Fellow of Corpus Christi College from 1954 until his death in 1969. Rod Thomson is no stranger to manuscripts. Apart from his numerous other writings, he has published indispensable catalogues of the manuscripts in the cathedral libraries of Lincoln, Hereford, and Worcester, and in this present volume extends his researches to the world of printed books, and a rich and rewarding world it is.

The fox of the title is, of course, Richard Fox (d. 1528), prelate, politician, scholar, and statesman, and proficient in all his varied roles. He was, successively, bishop of Exeter, Bath and Wells, Durham, and Winchester, reputed to be the richest see in Britain. He was also Chancellor of Cambridge University, Master of Pembroke College, Cambridge, and Lord Privy Seal under Henry VII. He was an extremely able diplomat, and in 1516-17, when he was in his sixties, he founded Corpus Christi College, Oxford, whose library is the subject of this attractive and informative volume. It was the first truly humanist library in Oxford. This is not to say that humanist books were not to be found in Oxford libraries before this date - they were - but there is a signal difference between an essentially medieval library which contained some humanist books and a humanist library.

Fox's career and the nature of his library are the subjects of the first of the three lectures, together with a discussion of how Fox might have developed his interest in the New Learning. Thomson suggests three figures: John Shirwood, Fox's predecessor as bishop of Durham, James Goldwell, bishop of Norwich, and Desiderius Erasmus himself, for a number of Erasmus's letters show that Fox was very much a part of the Erasmian friendship circle.

So much for the fox, but who were the bees? They were the denizens of Fox's celebrated beehive: a President, twelve Fellows, twenty scholars, two chaplains, and two clerks. The library they used was, as usual at the time, divided into two. There was the chained library, representing a sort of reference collection, and the circulating library, from which the Fellows might borrow, usually on an annual basis, the books they needed for their work. For the chained library we have a complete catalogue, compiled in 1589; for the circulating library, we have no catalogue at all and very few surviving volumes.

Thomson's second lecture is devoted to John Claymond (d. 1537), who was Fox's choice as first President of the new college. He had long been a friend of Fox, and they shared much the same interests. At various times he donated to the college at least 165 volumes, including thirty manuscripts. The books, says Thomson, were very like those of Fox, the great majority being copies of classical authors in Latin and Greek, and Thomson singles out just six of them "that can be considered notable for one reason of another, not least for demonstrating some flirtation with continental Reform" (19). What are these? They are Thomas More's Utopia, Simon Grynaeus's 1533 edition of Euclid and Proclus in Greek, Iohannes Reuchlin's De arte cabalistica, Martin Butzer on the Psalms, Erasmus's New Testament in Greek and Latin, and the first edition of his Ecclesiastes, published in 1635, just two years before Claymond's death.

Whence came these Greek books? The printed editions came primarily from Venice, but since the supply of printed editions was insufficient, Claymond had to resort to manuscripts. And whence came these? Primarily from the estate of William Grocyn, a Fellow of New College and good friend of Clayton who died in 1519. At least thirty-one of Grocyn's books came to Corpus, all of them in Greek, and all but five in manuscript. Claymond also arranged for the acquisition of a significant number of Hebrew books, and, as Thomson says, Hebrew, most unusually, "appears to have been conscientiously studied at Corpus" (28).

In his third and final lecture, Thomson turns to the library in the age of Elizabeth, a time of religious turmoil both inside and outside the college. After the great donations of Fox and Claymond, the next major bequest, by Thomas Greeneway (d. 1571), a later President of the college, was not made until the early 1570s, some decades after Fox and Claymond were both in their graves. This comprised at least sixty-three printed books, of which thirty-nine retain their original bindings. The collection, says Thomson, included only a few classical texts, for which there was now no need, "but a lot of theology, mostly overtly Protestant, including a virtually complete set of Luther's works" (37), which had formerly belonged to Thomas Cranmer. Thomson then goes on to examine the layout of the library and its furniture in this period and concludes with a discussion - splendidly illustrated - of the fine contemporary bindings which still grace at least 169 of the surviving volumes.

A word now about these illustrations. The book is a slender volume, but in large format - 23x31cm - and the figures, all in colour, are excellent. Fourteen illustrate documents or pages from books, and every word, in Latin, Greek, or Hebrew, is easily readable. Seven figures illustrate the beautiful bindings, and two depict certain aspects of the library furniture. They are all a superb complement to the text.

The book concludes with four Appendixes. The first is a list of surviving books from the college library to 1589, usefully arranged by donor. There are 403 items, all listed by shelf-mark, but they include many more actual books, since many of the items contain two or more quite different books bound together. Of these 403 items, sixty-five are manuscripts, and of all the items, the donations of Fox and Clayton represent 56%, 111 from Fox and 114 from Clayton. My only trifling regret is that Professor Thomson did not include a transcript of the 1589 catalogue. The second appendix is a transcript of a letter, with English translation, from Clayton to an unidentified old friend referring to Clayton's own compositions, and the third is a transcript in Latin of a letter from Thomas Linacre to Claymond when the latter was President of Magdalen College, Oxford. The letter is undated, but must have been written sometime between 1507 and 1516.

Appendix D, which is of the greatest interest, contains extracts from the College Accounts relevant to the library. This is a splendid read, and we find information of the prices of books, the dimensions of the library and its furnishings, the price of paper, the cost of binding, rebinding, and repairing books, the price of glass for the library windows, and much important information on the chaining of the books. I confess my favourite entry to be the thirteen pence paid to the apothecary "for a perfume of Paree for the librarie against the Duke of Polonia his coming" (84), though I suspect the "bucke" for which Thomas Parker was paid three shillings and four pence for bringing to Corpus (83) was large with four legs rather than small with a leather binding. The volume concludes with a bibliography and useful index.

All in all, this attractive and informative book makes a substantial contribution not only to the history of a single library, but to the history and contents of college libraries in general at a time of intellectual and religious ferment. It also makes important contributions to the history of the spread of humanism and protestantism - sometimes welcomed, sometimes strongly opposed - at the University of Oxford in the early modern period, and we can only express our gratitude to Professor Thomson for making this information so readily available to us.