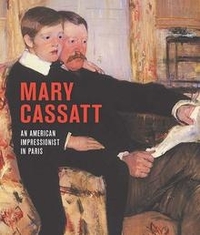 What do American painter Mary Cassatt (1844-1926) and French art collector Nélie Jacquemart-André (1841-1912) have in common? Both were strong-minded, childless women, who forged new professional roles for themselves in the Paris art world of the Belle Époque. At different points in their lives both lived only streets away from one another in Paris's fashionable Eighth Arrondissement; yet, though their social circles slightly overlapped in Paris, these two inventive female figures may never have met. Their approaches to art were distinct, with Cassatt an avant-garde painter in a modern Paris style and Jacquemart-André a historically-minded collector of Old Masters. Recently, though, Nélie's sumptuous 1869 hôtel particulier in the boulevard Haussmann, now a French state museum, hosted a significant exhibition of some of Cassatt's best and most representative paintings, in order, according to Jacquemart-André Foundation President Jean-Pierre Babelon, to "enable the general public in Paris to have an overall view" of Mary Cassatt's "remarkable and varied" work.

Indeed, one of the chief accomplishments of this exhibition - which ran from 9 March to 23 July 2018 - and by extension of its excellent accompanying catalogue co-authored by Nancy Mowll Mathews and Pierre Curie - has been to reintroduce Cassatt and her work to Parisian and European audiences. Mary Cassatt, une impressioniste américaine à Paris makes a strong case for Cassatt's importance. For decades now Mary Cassatt has been well-known to United States scholars and museum publics, most of her significant paintings belonging to American institutions - with only a handful held in the Musée d'Orsay or in other European collections. Although Cassatt lived for most of her adult life in France, and although she was, quite remarkably, the only American and one of only three women who belonged to the Impressionist group, contributing to many of its most important exhibitions, she has largely been dismissed, sidelined, or forgotten in Europe since her death in 1926.

The primary author of this beautifully illustrated and well-documented catalogue, Czech-American art historian Nancy Mowlls Mathews, is highly qualified to convince European readers and museum audiences of Cassatt's artistic importance and contemporary relevance. She was the senior curator at the Williams College Museum of Art (1988-2010) has written several influential books on Cassatt, including Mary Cassatt, A Life (1994) during her long, active, and distinguished career. Along with British feminist scholar Griselda Pollock, Mathews has been responsible for rescuing Cassatt from a mistaken mid-twentieth-century reputation as a painter of limited, genteel genre pieces. Matthews has helped establish Cassatt as one of the most important painters of her day, a "daring modern woman," as Mathews concludes in her last chapter, "with a universal message" - and probably more than one such message, and quite richly complex messages - imbedded in her art.

Mathews's introductory chronology and her six well-ordered chapters adeptly introduce readers who may be unfamiliar with Cassatt to her life and work while providing lively, in-depth perspectives for more experienced Cassatt enthusiasts. Matthews's first chapter, "An American in Paris," provides a useful frame of reference especially for new European audiences. Yet though the question of Cassatt's national identity is genuinely vexed - "Museum curators today know the dilemma of whether to hang Cassatt in their American galleries or in the French," Matthews comments, "since she belongs stylistically in both at certain times and does not fit in either at others" - the question of Cassatt's nationality is an old-fashioned and rather naïve one. Contemporary scholarship, which can trace origins of today's global and transnational culture in figures like Cassatt, have more sophisticated models for understanding her multiple identities.

Still, this and other chapters provide clear and accessible visions of Cassatt that will appeal to many different readers. Those interested in Cassatt's background and social history will appreciate "Who Were the Cassatts?" Those drawn to Cassatt's signature mother-and-child paintings will delight in Mathews' chapter, "Maternité," which marshals some of the most interesting examples of Cassatt as a "painter of 'the modern Madonna,'" and which also demonstrates Mathews's gift for elucidating some of the deep and complex dynamics behind these images. In this chapter, too, Mathews makes the most of lesser-known pictures drawn from European collections - mother-and-child paintings from Paris, Lisbon, Zurich, Bilbao, and Belgrade - to create a fresh and unique ensemble of the most recognizable category of Cassatt paintings and the most common type she produced after 1900.

Though Mathews' chapter "The Making of an Impressionist" adeptly handles the complex question of Cassatt's relationship to the French Impressionists, and notably Cassatt's colleague and frenemy Edgar Degas, Matthews's most interesting and effective chapters are the last two in the catalog. The penultimate, "Experimentation," gives an engaging and insightful account of some of Cassatt's artistic techniques, including an illuminating discussion of Cassatt's dry point series in 1890, which "brought Cassatt further into the spotlight as a renowned printmaker and mother-and-child specialist."

Mathews's final chapter, "Modernité," is perhaps her best, as it combines an appreciation of Cassatt as a Paris-trained modern painter with her achievements as a female interpreter of women's lives. In some of her earlier work, a more overtly feminist Matthews wrote about the modernity of Cassatt's mothers and children as reinterpreting the Old Masters, committing to an interpretation of modern life and a non-sentimental treatment of motherhood, and establishing a deep sympathy with children and respect for women. Even more of such a feminist approach might have been welcome in this contemporary exhibition, at a point in history where issues of gender are still of premiere importance. Still, Matthews concludes that "Cassatt's talent for portraying modern women and children with enduring respect was appreciated by audiences at the time and continues to be the basis for her secure position in the history of art."

The catalogue also includes two further essays by additional contributors, under the rubric of "Perspectives." Flavie Durand-Ruel Mouraux's account of Cassatt's working relation with Parisian art dealer Paul Durand-Ruel is fascinating for Cassatt scholars and others interested in Cassatt's negotiation of the business of art - an important and somewhat less-studied aspect of her painterly career. Pierre Curie's "Female American Artists in Paris" rounds out the catalogue but could well have introduced it, as a charming, short, and quirky discussion of a phenomenon studied in more depth by American art historians such as Erica Hirshler. Pierre Curie is a curator at the Musée Jacquemart-André, and his sketch of women painters in Paris reminds us that Cassatt's achievement, though unique and impressive, belongs both to a pioneering generation of international women artists (Nélie Jacquemart was herself a society portraitist) as well as to the rare and fruitful milieu of Paris, in which women like Cassatt and Jacquemart - as different as they were - found a place where they could pursue careers that broadened opportunities for women artists, entrepreneurs, curators, and collectors for generations to come.