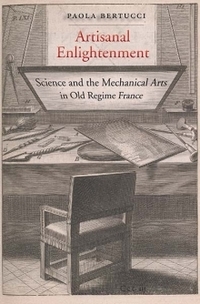 In Diderot and d'Alembert's Encyclopédie, the artisan is treated as an object of observation, not unlike the insentient tools he manipulates. Although the publication was committed to recording the mechanical arts, its rhetorical treatment of practitioners hewed to entrenched mind-over-hand hierarchies and ultimately perpetuated the artisan's elision in histories of the Enlightenment. In her pioneering book, Paola Bertucci reconsiders the role of artisanal expertise in the production of knowledge in eighteenth-century France. Building upon interventions by Paolo Rossi, Steven Shapin, Simon Schaffer, Liliane Hilaire-Pérez and Pamela H. Smith, Bertucci contributes to the restitution of "invisible technicians" in narratives of epistemological innovation. She does so by examining a hitherto little-known institution: the Société des Arts, which operated in Paris at the fringes of the Académie des Sciences around 1718, and then again from 1728 through the early 1730s. Its members formed a motley assembly of artisans and savants committed to improving the "useful arts" through the integrated deployment of theory and practice. They styled themselves as artistes, those endowed with esprit who worked "in an art in which genius and hand collaborate" (10). By delving into this enterprise, Bertucci both recovers the forgotten figure of the artiste and enriches our understanding of how and why progress in the mechanical arts was pursued in the Ancien Régime.

Much of the material Bertucci treats has been overlooked by historians due to the fact that written and visual descriptions of making and machines so often fall into disciplinary interstices. Unlike today's scholarly landscape, she contends, early modern discovery was populated by polymaths of varied expertise. In this spirit, Bertucci's book invites readers to follow the logic of figures operating outside of and in between conventional structures of intellectual and artistic production.

Artisanal Enlightenment grew out of an article in which Bertucci amended explanations of the Société des Arts' rise and fall with the aid of a new cache of documents discovered by her co-author, Olivier Courcelle. [1] The Société's decline resulted not from competition with the Académie des Sciences as had been suggested previously, but rather, from the negligence of its patron, the Count of Clermont, and from a lack of the royal support they sought. In her introduction, Bertucci emphasizes the artiste's dedication to a kind of "political epistemology": the creation of knowledge and skills that would directly benefit France's development. The author builds upon this concept to claim that Enlightenment pursuits of utility and improvement originated in the artiste's championing of the mechanical arts as a distinct realm of innovation. Establishing the Société des Arts was deemed the most visible way for the artiste to show how he could advance French imperial and economic interests.

The book is organized chronologically, and its sources consist of correspondences, meeting minutes, illustrations, and technical treatises. The first chapter establishes the roots of the Société des Arts in Jean-Baptiste Colbert's mercantilist agenda, out of which emerged a proposal to perfect art, science, and industry. Bertucci implies that within Christian Huygen's Project de la Compagnie des Sciences et des Arts (c. 1663), there was a plan to publish a (Baconian, i.e. descriptive) "History of the Arts", though no such term is used in the document, nor does she indicate another source for its origin (36-37). The Académie des Sciences never officially undertook this editorial program, though a commission headed by the Abbé Bignon embarked on a "description of the arts" in the 1690s. This project - designed to preserve industrial achievements for posterity - was never published as envisioned due to inadequate institutional support. Only after the publication of the Encyclopédiedid an iteration of this endeavor reach fruition as the multivolume Descriptions des arts et métiers.

During the Regency, René Antoine Ferchault de Réaumur became the interim director of the "description" project, which he referred to as the "Histoire des arts." [2] The second chapter addresses how his epistemic priorities - born from metallurgical activities - shifted the project's emphasis from preservation to the pursuit of technical improvement. A supervisor in the Regent's Survey (1716-18), Réaumur saw firsthand the advantages of positioning academics at the nexus of learning and trade. Despite his investment in the industrial arts, Réaumur held a dim view of the artisan as a generator of knowledge.

The third chapter explains the establishment of the Société des Arts and reveals how the artiste distinguished himself from the artisan. He did so by performing his ingenuity and by demonstrating how he could improve the public good, serve the state, and enrich participants. Here, Bertucci focuses on the Société's initial founder, Henry Sully, who valued the know-how of the laborer and privileged insight acquired through practice. A watchmaker, Sully used the success of the Manufacture of Watches as proof of the potential of the Société des Arts. Notably, horological inventions and enterprises feature prominently throughout Bertucci's book, wherein the fabrication of timepieces serves as a metaphor for the kind of mechanical acumen that artistes could contribute to society.

Extending this analogy, Bertucci proposes in the fourth chapter that artistes fashioned themselves as the "régleurs" of the French state, which they would monitor like a fine-tuned machine. Within the Société, clockmakers and surgeons - men excluded from the Académie des Sciences due to their manual occupations - found authority and sought opportunities to advance French interests. She attributes the group's dissolution not only to absentee patronage, but also to the "inherent paradox of its political project" (140): The Société touted collaboration, but its members were motivated by their own upward mobility, a trajectory unsupported by the institution's marginal status.

Chapter five examines how artistes framed writing as a political act, one through which they could prove their professional utility. Their objective was to churn out tracts that would promote technical innovation and disperse the cloud of secrecy presumed to obscure artisanal discourse. Here, Bertucci briefly discusses the function of illustrations enhancing these texts, a subject that has received little study with the exception of Madeleine Pinault-Sorenson's articles and unpublished dissertation. Further examination of such visual materials will no doubt be of interest to art historians.

Three case studies exemplifying how machines were invested with epistemological utility comprise the final chapter: the bureau typographique, Abbé Nollet's school for experimental demonstrations, and Jacques de Vaucanson's automata. The first two examples exhibit how machines were seen as tools of the Enlightenment, whereas the last predicts the uncanny ways machines might outperform and even supplant humans. Interactions with machines could either aid in skill acquisition, or lead to deskilling; one's initial social status determined the shift conferred or incurred.

Throughout her book, Bertucci draws upon a trove of primary material as varied and dispersed as the historical figures she studies. In the body and footnotes of the book itself, it sometimes becomes difficult to trace her sources to better understand her arguments and chosen terms. Synthesis and summary occasionally come at the expense of primary citation, which is limited. Given that so little of this material is reproduced elsewhere, it would have been desirable to include appendices for certain sources, or to explicitly direct the reader to publications that contain transcriptions essential to her narrative. The absence of such original material in the book may, of course, result from editorial restrictions.

A more comprehensive inclusion of sources might have allowed Bertucci's artistes to speak more directly. In both the introduction and conclusion, she calls upon the Encyclopédie as a philosophe-commandeered foil to the endeavors of the Société des Arts. The former saw themselves as "midwives" to the artisan, bringing his illiterate know-how into the discursive world. In the Société's "boundary-work", its members attempted to simultaneously elevate themselves above the artisan and differentiate themselves from the savant. In this pattern of self-fashioning, however, the Société did not pursue a truly "Artisanal Enlightenment" so much as an "Artiste's Enlightenment", one that privileged publication over practice (214). In this light, we must attend to what our printed sources and selective descriptions inevitably flatten or obfuscate as we strive to translate the kinesthetic, operational knowledge of the artisan into written discourse.

Bertucci's study offers convincing explanation of the political and economic motivations driving the production of artisanal and industrial knowledge across the reigns of Louis XIV and Louis XV, amending accounts that have given the mechanical arts short shrift. Her book will be of paramount interest to historians of science and art alike. By charting the course of the short-lived Société des Arts, Bertucci maps the complex status of artistes and their collaborators, illuminating how artisanal expertise was at once increasingly valued and persistently marginalized in the Enlightenment pursuit of progress.