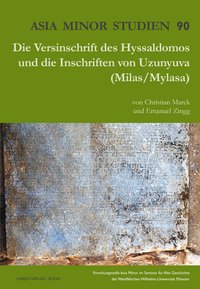 Most of this book is a superlatively good edition, with translation, full commentary, and fine photos, of an astonishing inscribed new Hellenistic Greek poem from the Uzunyuva district of Karian Mylasa (western Asia Minor), now Turkish Milas. Its 121 lines, which make it the second longest inscribed Greek poem known, are signed: 'Hyssaldomos son of Eirenaios made this poem'. The poem is very difficult, but important for students of Greek religion and poetry. Christian Marek and Emanuel Zingg deserve congratulations and gratitude for their labours and acumen. They never impose their opinions, but fair-mindedly explore almost every possibility. They have drawn on the expertise of fellow-scholars, notably the late Martin West.

The stone is damaged: the first two lines are illegible; only the first half of each of the next 83 or so lines survive; the rest are complete. Some difficulties stem from this: the poem is about help given by an anax ('lord'), whose identity was perhaps specified at the start. And maybe there was an introductory title-line with a more generically precise word than the bald 'poem'.

Letter-forms allow dating only within a wide margin (later 3 rd or early 2nd centuries BC). But on a Milesian inscription, a Hyssaldomos son of Eirenaios represents the [Mylas]eis in a treaty of ?185-0 BC, along with Apollonios son of Nysios. It is the combination of name and father's name that makes a link with our poet irresistible: if not actual identity, then a close relationship ('floating kindred'). The rival restoration of the 'ethnic' is [Ias]eis, from Karian Iasos, but the rare name Nysios is attested at both cities, and the new text tilts the balance in favour of Mylasa. If we accept actual identity (plausible), we have a fix on dating. The poet's own name is Karian not Greek. Herodotus mentions a Karian Hysseldomos (sic; surely a mere variant spelling). Another Hyssaldomos was father of the 4th-century Karian satrap Hekatomnos and grandfather of the satrap Maussollos.

The poem's metre is highly unusual for this period, catalectic tetrameters 'cholotrochaic' (closing spondee or trochee): ― ◡ ― × ― ◡ ― × || ― ◡ ― ◡ ― ― ×. Diction is erudite and recondite; it resembles that of another challenging poem often dated to the same era (190s BC): the Alexandra of the 'dark poet' Lykophron. The Alexandra is full of hapax legomena (words, often compound adjectives, found nowhere else in Greek); the new text has (12) seven such words, all compounds, two with Lykophronic resonances. And anchipous, 'treading close', previously classed as a Lykophronic hapax word, occurs in the new poem also (line 47). Coincidence, or a tribute to the recently available dark poem? Resemblances are not purely linguistic: both poems end with prayers for safety - a hymnic trait. Both poems are a generic mixture. The new one is partly an 'aretalogy' (praise of a god's powers) although, as the editors observe, that word is really a modern confection; and partly an epiphany narrative. The god-list (below) is paratactic and Hesiodic. For another similarity with Lykophron, see next para.

The new poem, summarized p. 68, begins with praise of the anax's powers, and proceeds to a narrative: a man called Pytheas (who may or may not share his name with an architect active in 4th-century Karia, and who may have been an army officer, line 9) was a prisoner on the acropolis of Karian Kindye, a town with its own miraculous Artemis. In moonlight, the anax intervenes. With the help of Artemis (named as his paredros or coadjutor, line 81), he puts the enemies to flight. This, then, is a military epiphany, and was to the advantage of a larger community than Pytheas and family. The anax is compared to: Zeus, Poseidon, Apollo, Hermes, Dionysos, Ares, Asklepios, Hephaistos; but of these males, only Zeus and Ares are named (and Aphrodite is 'Dione's child' later in the poem). So too Lykophron habitually refers to gods by periphrases or by more or less obscure epithets, but makes exceptions for precisely Zeus and Ares (and Hades, though usually as place not god). Of Hyssaldomos' eight, the 'odd god out' is non-Olympian Asklepios, Apollo's doctor son. This is perhaps explicable by the presence of healing sanctuaries in Karia, notably of Hemithea at Kastabos and of Asklepios and his son Podaleirios at Syrna. The narrative resumes with Pytheas' release, perhaps further help by Artemis, and a report of an appearance of the anax to Pytheas in a dream; the anax's encouragement and instructions are in direct speech. The whole concludes with an own-voice prayer by the poet; he signs off in the way we have seen.

The epiphany described by Hyssaldomos must be added to a long list of military epiphanies in Karia. Their striking frequency in that part of the world was noted by W. Kendrick Pritchett, who connected it to the reputation of Karian seers and diviners. Karia was, it seems, a spooky place. If, like the Roman general Labienus in 41 BC, you invaded a Karian sanctuary, you were liable to be terrified out of your wits by Zeus' thunder and lightning, and by the yelping of the unearthly hounds of the sinister Karian goddess Hekate. An inscription published in 1931 narrates this in lively prose.

The anax's identity is a nice problem; nearly 30 scrupulously honest pages are allotted to it. Gottmenschentum? Or should we opt for an Olympian or near-Olympian god, or a newer but nonetheless powerful deity? A deified or heroised human being (e.g. a city-founder) is in my opinion unlikely, whether what the editors charmingly call a 'vergöttlichter Guru' (111), or foreign king, or local ruler: Hekatomnos, Maussollos or later Olympichos. Hellenistic ruler-cult was capable of gushing flattery, but to attribute energetic epiphanic help to a long-dead satrap or pocket dynast and call him 'greatest of daimones or mortals' (line 119) is a gush too far ('or mortals' is polar expression: the editors hesitantly cite parallels). The Pergamene Attalid dynasty's founder, Philetairos, was honoured with posthumous cult for repelling the Kelts in battle, but that is not a helping epiphany of this sort. A later Attalid, king Eumenes II, also had cult, but did not stand over people in dreams. A rightly cautious discussion of historical context - piracy? inter-dynastic or petty inter-city wars? - is folded into the deified ruler section. The truth is, the poem shows no awareness of political developments in the wider Hellenistic world.

A proper god, then. But the gods listed by the poet are compared to the anax, and an entity cannot logically be compared to itself. This rules out Apollo, the god most often called anax without name, and the most obvious co-worker with Artemis, as when they shoot down Niobe's children in the Iliad. 'Hades the hateful' (Homer) is a non-starter. So a powerful non-Olympian is needed, and the editors spend half their 30 pages weighing up the case for Egyptian Sarapis. This distribution of attention hints at approval, but they withhold endorsement: Sarapis' expected paredros is Isis. It is hard to think of another suitable candidate. The Anatolian moon-god Mēn, phenomenally popular in post-Classical Asia Minor, and often called 'great', basileus, or tyrannos (two 'king' words), satisfies some requirements: he is a healer (cf. lines 99-101), moonlight shines (line 16, cf. 82), and Mēn is paired with Artemis (lunar in a fragment of Aeschylus' Wool-carders) on later inscriptions. Long-held dogmas about Mēn need revising in light of the most relevant volume (VB, Karia etc., 2013) of the Lexicon of Greek Personal Names, which assembles and dates the very many names formed from Mēn ('Mēnophoric' names, as they have been called), already studied provisionally by Robert Parker. In 1954, Louis Robert asserted that Mēn in Karia was worshipped only in places which were partially Karian or became so only late; and for Martin Nilsson, Mēn-worship was an 'ausgesprochener Sklavenkult'. But we now see that Karian, including Mylasan, parents in the mainstream had started to give their children Mēnophoric names by the time of our poem; and the sheer number of such citizen names in western Asia Minor generally weakens the slaves-only theory. On Rhodes - always more than merely geographically close to Karia - there were associations of Mēn-worshippers in the 2nd century BC; in one inscription they are cited in the same breath as an association of Sarapis-worshippers. By no means all will have been slaves, though some were no doubt resident foreigners (metics). But could so opaque a divinity as Mēn, never much of a civic institution anywhere and without dedications at this particular sacred find-spot, have staged a full-scale city-saving military epiphany, or spoken in dreams? That would be surprising, though another later inscription calls him epiphanēs, and it is equally true of Sarapis that he is not in Pritchett's list of military epiphanies. I do not press the Mēn suggestion far, but it is worth airing.

Two questions remain. First, irrespective of whether the poem was read or performed (82-85), how many of the not-very-highly-educated locals had more than the vaguest idea what it all meant? Such elite displays can be paralleled by recent finds of preposterously learned inscribed poems in remoter, wilder Afghanistan, but the worry remains. Second, where was our super-literate orator-poet educated? The nearest panhellenic cultural centre is Rhodes, and that is the best bet.

The remaining 83 pages present 118 other inscriptions, many new, all edited with the same care and skill as the poem, the prize exhibit. This is not the place for detailed treatment, but among the texts are mostly new 'Pachturkunden' (nos. 13-19); a new private dedication to Sarapis and Isis on behalf of the future Attalos II, brother of Eumenes II (no. 23); and the first Mylasan attestation of Apollo Delios (no. 17). This exciting book deserves to be widely read, reviewed, and applauded.