Kit Morrell: Pompey, Cato, and the Governance of the Roman Empire 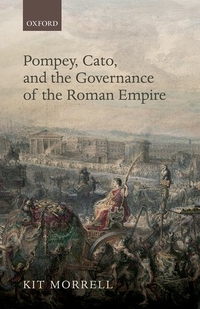 This book derives from a PhD thesis completed at Sydney in 2016. In it, Morrell has a clear agenda: to rehabilitate the reputations of Pompeius Magnus and Cato the Younger as joint sponsors of a project to improve the governance of Rome's late-republican empire. Conventionally, the two men are depicted as political enemies before a reconciliation in the late fifties BCE. Yet, as Morrell successfully argues, those differences did not stop them from (occasionally) cooperating in the interest of reform. The book thus reinterprets the political constellation of late-republican Rome and the place of provincial government in politics. It is a major work.

The first part of the book argues that good provincial government mattered to both men. Chapters 1 and 2 explore Pompeius's overall approach to provincial matters, first in his consulship in 70 BCE and then as proconsul in the East during the sixties. Chapter 3 shows how Cato's ideas were grounded in Stoic teaching about the equality of all humans.

The remaining chapters form a rough narrative of the provincial reform project during the fifties. Chapter 4 argues the repetundae law passed by Caesar in 59 was part of a broader push against misgovernment which included the show trials of C. Antonius and Flaccus in the same year. Chapter 5 suggests Pompeius was behind the abortive attempt in 55 to make equites liable under the repetundae law, connecting this to the trial of Rabirius Postumus in 54. In Chapter 6, Morrell argues that following Crassus's defeat at Carrhae in 53, the Romans became acutely aware of how tenuous their hold on the eastern provinces really was. The response was a policy to win local support by upright government. Chapter 7 examines the context and mechanics of the lex Pompeia de provinciis of 52; this contains detailed argument which complements other recent scholarship on the law. In Chapter 8, Morrell explores what Cicero in 51 calls the "politeuma Catonis", or Cato's policy, of self-consciously exemplary government by morally upright men in the eastern provinces.

The book combines two different strands of scholarship. The first is the type of detailed political analysis of each year reminiscent of Gruen's Last Generation of the Roman Republic (published in 1974) but rare since then. Morrell is excellent at showing the short-term constraints operating on political actors, and what else was happening at the time. But she also relates the narrative to the ferment in political thinking in Cicero's Rome. That, by contrast, has received recent attention, with scholarship on Stoicism in a Roman context and on Cicero's political treatises (see for example recent work by Valentina Arena and Bejamin Straumann).

There are many small arguments in the book: for instance, about the political context of Verres' trial, the date of Rabirius Postumus's, or the meaning of maiestas in Cato's letter to Cicero (Fam. 15.5). These are largely convincing and will be of interest to scholars studying those questions. But they do not significantly affect the larger argument about cooperation between Pompeius and Cato in the project of provincial reform. And that larger argument is stronger in some places than others.

One place it is strong is when arguing for a continuity of method. Reform was not enacted only by legislation; censors, for instance, could expel unworthy senators. Time and again, show trials coincided with major new laws, and Morrell argues this was no coincidence. The prosecutions of, for instance, Verres, Flaccus and Milo were all intended to show the harsh penalties for misbehaviour under the new order.

But, at the same time, positive exempla were promoted. Q. Mucius Scaevola in the nineties had been the forerunner, and Morrell cleverly links his famous governorship of Asia with Pompeius's behaviour in the East, Cato's annexation of Cyprus and (particularly) the new governors appointed in 51 under the lex Pompeia. These men were there to carry out "Cato's policy" of non-exploitative governance. This was Stoic philosophy transformed into real-world action.

Turning to the two principal figures, Morrell makes a good case for Cato's ongoing commitment to reform in the interest of provincials, as well as his political pragmatism. This counters the common modern portrait of him as one who acted as if he were in Plato's Republic, as Cicero says in a moment of frustration.

Pompeius is treated quite leniently, however, especially when compared with Caesar. Morrell says that, with his actions in Hispania and Gaul, "Caesar appears a somewhat unlikely reformer" (142), and his involvement in the repetundae law of 59 is downplayed. But she excuses Pompeius's conduct in Anatolia, focusing on his desire to avoid bloodshed while minimising his personal dominance over Roman provinces and client kings. Morrell argues Pompeius was in the background of provincial reform measures in the mid-fifties even when there is no evidence; this is possible but not always convincing.

A real strong point of the book is the way it treats the role of philosophy in Rome in this period, not only in political thought but also in practical politics. This is an open problem: cultured Romans showed deference to philosophy, but how seriously did they take it? Was philosophy simply an accoutrement for the cultured man, or did it actually affect his behaviour? Morrell shows convincingly that it affected Cato's, and she makes a reasonable argument for the importance of philosophy to Pompeius and others among the aristocracy. She makes it clear that we cannot treat Roman politics as a purely cynical business devoid of moral or philosophical content.

In her 2010 book Roman Republics, Harriet Flower described the fifties as a transitional, post-republican period. Morrell's book is an impressive reply, showing the continued commitment of senior Roman politicians in these years to practical reform. They, at least, believed the Republic could be saved. And I use the word "practical" deliberately. Morrell gives us a Cato who was more a practical politician than the martyr of Utica. But she balances this with depicting a Pompeius who was a man of principle as well as Rome's scheming godfather. The result is a Rome which feels surprisingly modern, one in which politicians were determined to make the world a better place - as long as it did not cost them too much.