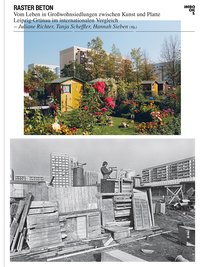 Raster Beton is a brilliant intervention in the history and study of the Plattenbausiedlung - large scale housing communities built out of prefabricated housing elements and panels (Platte) in the postwar era in Europe and around the world. In the German Democratic Republic, for example, the Housing Program, announced in 1973 as a key pillar of the Honecker's signature "Unity of Economic and Social Policy" (often called "Real Existing Socialism") sought to ensure that by 1990 all citizens had adequate, modern housing - much of which was built in Plattenbausiedlungen which amounted to entirely new cities, socialist cities, built from whole cloth on the tabula rasa of the "green fields" - the Grüne Wiesen, including Leipzig-Grünau, which came to hold almost 100,000 people (the second largest in the GDR, after Berlin-Marzahn). After the Wende, residents of places like Grünau or Marzahn who stayed found that their onetime utopia was now viewed as a dystopia.

Raster Beton takes a major step towards unravelling the negative image that Plattenbausiedlungen acquired after 1990. It is a scholarly publication that grew out of a festival by the same name which took place in 2016 over several months in Grünau. [1] Led by the artist collective D21 Kunstraum Leipzig e.V., residents, artists, and experts created panel discussions, public art events, photo exhibits, film screenings, and historical exhibitions to explore and celebrate life in the Plattenbauviertel of Grünau.

The resulting publication, edited by Juliane Richter, Tanja Scheffler, and Hannah Sieben, both delves into the history and culture of Grünau, and explores wider themes of the Plattenbau and the fate of socialist architecture post 1990. The first essay, by architectural theorist Wolfgang Kil (8-11), highlights the bittersweet irony that, at one point modern, industrial building had the sheen of the futuristic upon it but that now they are actually considered Altbau - the modern is now old. He suggests that the past cannot be simply blown up and erased, but it can and should be renovated in ways that preserve its modernity for the future. Next is a series of stunning photos of Grünau in black and white as well as color by photographer Harald Kirschner (12-21), who Juliane Richter describes in a short essay as a "chronicler of his everyday environment." The photos show Grünau as it was under construction, and brand-new, and show the swarm of kids with their young parents moving in (a common sight in Plattenbausiedlungen). Thomas Hoscislawski's essay on the history of the Grünau Großwohnsiedlung is detailed and rich, and points to an important trend - that as the Housing Program continued on in the 1980s, the Politbüro began to get concerned about the costs (which were enormous, and put the GDR into deep debt with the West) and ordered that the density of the building be increased, taking away from the original Corbusian idea of open space, fresh air, and lots of sunlight (24-33).

This is important, because Sebastian Pfeiffer next describes the history of Grünau post 1990 as one of a sudden drop in population (a 50% decline by 2006), with the resultant mass of empty apartments, 7,000 of which were demolished - 20% of the total built (34-41). What is so remarkable about the story that Pfeiffer tells is that as buildings were demolished, more green spaces opened up in Grünau, bringing it more closely in line with what planners like Corbusier might have envisioned, and residents and officials there have used this to their advantage. The open spaces have been turned into "urban nature," communal natural spaces, and gardens, and it has been "rebranded" as a place of ecological innovation and experimentation. In a weird way, socialism and capitalism worked together in a dialectical fashion to find the kind of balance and harmony modernist planners always envisioned! And the cycle seems to be beginning again, as Katharina Benjamin and Tom Erdmann note in their essay: Leipzig's population has been growing and is expected to grow much more in the next decade, and with it a need for 50-80,000 new dwellings, repeating the same urban influx and concomitant affordability crises that afflicted cities originally, at the beginning of the last century and after 1945 (42-49). Only this time, there won't be a need to build new Siedlungen from scratch on the Grüne Wiese.

Antje Kirsch in her essay provides a tour of the public art commissioned by Grünau's planners (50-59) - a fascinating look at how art was conceived of as part of the holistic vision of creating a new, modern culture which would elevate the working class, and which was dictated by the state (rather than a private art market). Like the architecture, this art is a material representation of a past aesthetic and political economy that, because of its materiality, cannot easily be erased and has been waiting to be rediscovered. Simone Hain, one of the world's foremost scholars on industrial housing, writes in her essay about some of the lesser known ideological and theoretical genealogy of the Plattenbau, including architects like Hans Schmidt and Nikolai Chernyshevsky, and, interestingly August Bebel - as well as a genealogy of the opposition to industrial Großwohnsiedlung (60-69). Tanja Scheffler's essay explores the genre of Plattenbaufilme which were popular in theaters and on television in the GDR, such as Insel der Schwäne, Einzug ins Paradies and Die Architekten - several of these were screened at the festival in 2016 (70-80).

Especially helpful are essays by Gwenaëlle Le Goullon, who writes on the genesis, zenith, and decline of the French grands ensembles (82-85) and Dieter Hassenpflug, whose article compares the development of Großwohnsiedlungen in China to the GDR, and who argues that massive housing settlement building never stopped in China, but just evolved as a necessary means of coping with the massive urbanization and population explosion that China has experienced since the 1970s, framing China as a peek into what could have been in the GDR, had Plattenbauen not come to a screeching halt in 1990 (86-92). Another contribution by Stefan Rettich, Kaja Mielcarek, Monika Waszek and Janine Woltmann looks an ambitious but less-than-successful Großwohnanlage "Grohner Düne" in Bremen, showing the difficulty of such projects in a capitalist market (94-97).

David Crowley's essay, which stands out as perhaps the most fascinating in the volume, looks at several controversies that have arisen in Poland and the Czech Republic about the fate of once iconic communist era buildings - in particular, the Hotel Cracovia in Krakow, and the Hotel Praha in Prague (98-107). In both cases, the buildings fell victim to the takeover of predatory capital, making the debates and demonstrations for and against their demolitions into fights about neoliberalism and urban space. Interestingly, because these properties were in the center of the cities, their land was valuable for capitalists - a problem that places like Grünau do not have (mostly) to worry about.

The volume ends with an article by Richter describing the festival itself, importantly tying the scholarly work back to the real lives and real spaces of Grünau itself (124-133), a piece by Scheffler and Susann Schuhmann on the film series they organized (140-144), and as a coda, a reminiscence from Grünau resident Steffen Schröter, a fitting end to a book that very successfully blends everyday life, art, scholarship, and architecture (145).