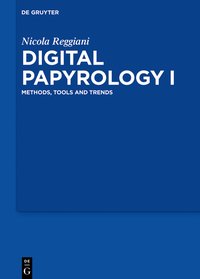 This book is the first comprehensive survey of the digital resources which have been developed over the last few decades in the field of papyrology. Its explicit aim is "to pinpoint common trends, to sketch methodological outlines and to envisage an epistemology of Digital Papyrology, in view of possible future developments" (VI). The book is made up of nine chapters, two appendices, bibliography and four indices.

In Chapter 1 Reggiani provides a historical overview of the place of Digital Papyrology in the current scholarly scenario. He identifies three main reasons for the spread of digital tools: epistemological (need for comparison and discussion); methodological (need for organisation and standardisation); and increased interest in information technologies. Reggiani also provides a list of the main trends associated with Digital Papyrology, including an increase in collaboration and accessibility; integration between different tools; and standardisation (not fully achieved yet).

Chapter 2 offers a comprehensive overview of the online bibliographical resources associated with papyrology (e.g. Bibliographie Papyrologique and Trismegistos bibliographies), sketching a history of their origins and development from hard-copy format to online access. A key issue is the identification of inconsistencies within these tools and across the integrated papyrological tools. A need for standardisation and uniformity is also stressed.

Chapter 3 discusses the existing papyrological catalogues, defined as "collections of metadata", from the Heidelberger Gesamtverzeichnis for documentary papyri to the Leuven Database of Ancient Books for literary texts. Reggiani stresses the importance of metadata as a means for contextualisation, on the basis of which historical and comparative research can be conducted. Reggiani also points out the need for the constant updating of papyrological catalogues as new texts are published every year.

Particularly useful are the list of digital thematic catalogues (79-92), such as Marriage and divorce papyri, and the catalogue of all the digital papyrological collections (103-114).

One of the issues raised here is the perishability of digital resources.

Chapter 4 provides a historical discussion of lists of words and phrases included in papyri, e.g. dictionaries, prosopographies and onomastica, and work-in-progress tools.

An emerging pattern is the frequent transfer from a hard-copy form to an online form. Reggiani points out how this transfer is "a significant progress in terms of both update and usability" (120). It also promotes integration with other papyrological resources and collaboration with the wider papyrological community (e.g. Words in Progress).

In Chapter 5, dedicated to digital imaging, Reggiani lists the advantages of digitisation as well as the new tools that have been developed over the last two decades. The advantages include preservation, access, readability and increased opportunities for collaboration. Among new tools are photographs in frequency (for dark or carbonized papyri); infrared digital technology (Posidippus and Artemidorus papyri); Multispectral Imaging (Petra papyri); and 3D imaging, which has improved the deciphering and reading of papyrological artefacts. An important section is devoted to digital palaeography, which focuses on tools for digitising different scripts in order "to provide solid terms of comparison for dating, and possibly deciphering, papyrus handwriting" (151).

Chapter 6 deals with a wide range of online tools for papyrological dissemination, including institutional websites and digital publications. Some of the material covered here overlaps with other discussions throughout the book (e.g. BL, 177). Due to the nature of their content, sections 6.1 and 6.3 would have better suited as appendices as they include lists of institutional websites and online exhibitions respectively. A most interesting section is 6.2, dedicated to digital tools for the dissemination of papyrology to non-specialists, which can be used for didactic purposes (in particular, the online didactic portal Reading The Papyri).

Chapter 7 deals with those "developing areas" of Digital Papyrology, among which we find tools for encoding papyrological texts (to produce linguistic lists and enable linguistic searches and historical studies) and Social Network Analysis (SNA). A number of tools of linguistic annotation are reviewed, including Sematia, whose aim is to investigate patterns of linguistic variations, and TM Text Irregularities, a database which "collects all the instances of phonetic and morphological 'variants' in the Greek documentary papyri", using tags in http://www.papyri.info/ (185). Reggiani warns against the over-reliance on quantitative methods to analyse ancient texts, reminding the reader that scholars' skills are essential for providing a correct interpretation of the data. SNA, introduced in papyrology only in the early 2000's and already largely used, allows scholars to reconstruct connections between individuals and groups (e.g. TM People and TM Networks). Though acknowledging its potential beyond the field of papyrology (196), Reggiani warns against the excessive generalisation of data.

Chapter 8 offers a historical overview of textual databases, including Thesaurus Linguae Graecae, Papyrological Navigator, and Papyrological Editor. Though very informative, this chapter includes a large amount of technical information which is not suitable for the non-specialist reader (e.g. XML and Leiden+). Reggiani notes that a new trend in Digital Papyrology is the creation of more advanced textual databases, which aim at providing scholarly digital editions in their own right.

In chapter 9 Reggiani lists the main methodological contributions digital papyrology has made to scholarship, including standardisation of papyrological abbreviations, metadata catalogues in the field of documentary papyrology, imaging and effective dissemination (257-59). Important outcomes include international collaboration among scholars and the large-scale availability of virtual images.

This book can be profitably used by papyrologists who wish to acquaint themselves with particular digital tools as well as by classicists and ancient historians (broadly defined) who wish to conduct comparative studies. It can also be used for didactic purposes as a handbook for students of papyrology and Graeco-Roman Egypt. The wide range of examples of tools and projects in the realm of digital imaging, in particular, is helpful to teachers and students alike who seek ways to familiarise themselves with the decipherment of papyri. Some sections are quite detailed. Others include a very technical jargon, which may put off a non-specialist audience. The omission of excessive (and at times repetitive) details and the addition of a glossary of technical terms would have been useful.

This book is nonetheless a welcome contribution to current scholarship as it provides not "just a list of tools" (VI), but a historical analysis of a wide range of electronic resources which have improved enormously papyrologists' ability to conduct research more efficiently. It identifies ways in which digital tools can be improved, thus promoting further integration within papyrology and between papyrology and other disciplines. Reggiani engages with an impressive range of relevant scholarship and his use of frequent quotations from papyrologists at past conferences brings the world of papyrology to life.