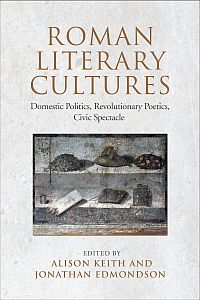 This collection of papers began life as a Presidential Panel at the Annual Meeting of the Classical Association of Canada in honour of Professor Elaine Fantham. It is a worthy gift to a leading Latinist, who died on 11 July 2016, after a highly distinguished career in Toronto and Princeton. The volume begins with a list of her publications, which includes eighteen books, three edited volumes and one hundred and fifteen articles. Elaine Fantham was a scholar of wide interests, ranging from Republican Latin poetry to Erasmus, via Cicero, Lucan and Ovid, and her study entitled Roman Literary Culture from Plautus to Macrobius is a book all students of Latin should read. The subjects covered by the essays assembled here reflect many of Elaine Fantham's interests, and the introduction, written by the two editors, is very aptly entitled 'Roman Literary Cultures'. After that, no attempt is made to pretend that there is any overall unity. The papers are simply collected into three groups: 'Domestic Politics', 'Revolutionary Poetics', and 'Civic Spectacle'. The quality of the whole makes this a book well worth perusal. It is also elegantly produced like all the Phoenix supplementary volumes.

In the first group C. Bruun offers new interpretations and translations of Varro, Menippean Satires fragments 531-2; F. Dolansky studies stories of rape in the second book of Ovid's Fasti; A. Keith looks at epigraphic evidence in order to offer a new contextualization of the Greek names of the Latin elegists' girlfriends; S. Blake investigates the role of slaves and slavery in Pliny's self-representation in his letters. In the second group of papers B. Weiden Boyd attempts to make use of Ovid's constant interest in matters of literary genre in order to show how his Remedia Amoris reflects on the very nature of didactic poetry; in another paper on Ovid, S.L. McCallum argues that pastoral poetry must be taken into account when trying to assess the generic polyphony of the Metamorphoses; again on the Metamorphoses, C.W. Marshall looks at the complexities and some of the wider implications of Ovid's narrative transitions, with a focus on book 9; C. Littlewood, in another paper about generic interactions, sheds light on Lucan's intermingling of epic and elegiac elements in the Bellum Civile; E. Kennedy handles the theme of revenge in the Aeneid in order to show how Silius Italicus' construction of his Hannibal as an antitype of Aeneas is based on a particularly insightful reading of the complexities of Vergil's epic. In the third and final group of essays J. Welsh studies fragments 378-82 (Ribbeck) of Afranius in order to see what can be learned about the social roles and interpersonal relationships of female comic characters; J. Tracy, in the collection's second paper about Lucan, argues that the erudution and artistical skill of the author of the Bellum Civile must be seen as promoting a political and educational revolution in order to help move Rome towards a more enlightened and democratic society; C. Ando takes a new look at the ways in which Rome reacted to foreign cults and tries to explain what these reactions and the policies they gave rise to presuppose; and finally, J. Edmondson analyzes the representation of gladiatorial games in Apuleius in order to show how it can inform us about interactions between local élites and ordinary citizens in provincial towns across the Empire.

The variety of the collection is obvious, but there are recurring themes and simlar approaches. Ovid, a poet dear to Elaine Fantham, stands out as a key subject, and Lucan is the other central poet; and of course Vergil lurks in the background when it comes to understanding both, just as he is central to the paper on Silius Italicus. Religion and historical and social contextualizations also figure strongly. Again, Elaine Fantham would have agreed and admired. In terms of scholarly technique and approach, all of these contributions are characterized by admirably tight focus. In almost every case, close study of individual texts helps to define the contours of a particular question, which is then handled with admirable brevity and clarity. All the papers are well structured, with many of them broken up into carefully and usefully articulated subsections. Throughout, the bibliographical citations are also admirably up to date. We also have here a nice mix of younger and more senior scholars. Overall, the editors have done an excellent job of uniting a group of friends, colleagues and students of Elain Fantham and of producing in her honour a volume that is a true reflection of her wide scholarly interests, her erudition, and her scholarly achievements.