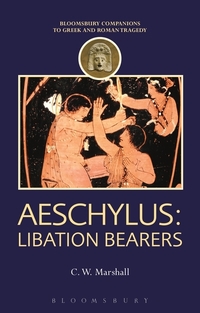 Libation Bearers dramatizes the return of Orestes to his native Argos as a young man to avenge the death of his father Agamemnon, who had been murdered by his mother when he was an infant. Accompanied by his best friend Pylades, and with the support of his sister Electra, with whom he is reunited during the play, he follows Apollo's oracular command to commit matricide and the homicide of his mother's lover. As the middle play of Aeschylus' Oresteia trilogy, Libation Bearers is not often analyzed on its own terms, and has received far less scholarly attention than the monumental opening play (Agamemnon), and the concluding legal drama with its terrifying chorus of Furies (Eumenides). Alex Garvie's 1986 edition of the Greek text for Oxford University Press made some important strides in changing that dynamic, and the new 2018 Aris & Phillips edition by Andrew Brown is very welcome. It is Professor Marshall's new book, however, that brings Libation Bearers, with all its thrilling twists and turns, to an audience without any necessary knowledge of Greek. Marshall's achievement is significant in this regard, given the density of the play's poetry and its structural complexity, but there is much also for scholars to learn in the details of his arguments, particularly concerning the performance of the drama, which is the volume's central focus.

The opening chapter 'Theatre and Theodicy' (1-26) traces the ways in which Libation Bearers contributes to the crucial theme of justice in the Oresteia and discusses the social, literary, and theatrical context of the original performance. Marshall makes several keen observations on the doubling of actors' roles and their implications for generating meaning. The same actor probably played Agamemnon in the first play and Orestes in the second and third, creating continuity between father and son. Another actor playing Cassandra in the first play, Pylades in the second, and Apollo in the third would generate 'a unified Apolline voice' (16). The second chapter 'Reperformance and Recognition' (27-59) develops further arguments regarding the possibilities of performance. The tomb of Agamemnon, posits Marshall, would be effectively located on the spot where Agamemnon's chariot had stopped in the previous play (29). Orestes may remove his shoes before making his offering at the tomb, which would mirror the scene in the earlier tragedy where Agamemnon removes his shoes before entering the palace (37). All the chorus members, argues Marshall, carry libation jars during their entry song, a theatrical highlight. Once the libations are poured in turn on Agamemnon's grave, the jars placed as offerings will remain to remind the audience of his murder throughout the drama, and will also underline the fact that Agamemnon has finally (after many years) received the rituals due to his corpse (35). The play, originally produced in 458 BCE, must have been reperformed in the 420s BCE given the great number of surviving tragedies, by Euripides especially, that engage with it intertextually. Marshall suggests ingeniously that Libation Bearers was produced with Eumenides as a pair at the Lenaea, a dramatic festival at Athens where tragedies were produced in pairs in the second half of the 5th century BCE (51). This would explain why the first lines of Libation Bearers are quoted as the opening of the 'Oresteia' in the comedy Frogs by Aristophanes from 405 BCE. Although Libation Bearers does not have a rich reception history, Marshall makes some shrewd remarks about its importance as a model for revenge tragedy, for recognition scenes, and for the second part of epic trilogies (52-9).

Marshall's chapter on 'Chorus and Character' (61-101) is a tour de force. His detailed analysis of the structure of songs and scenes exposes the utter brilliance of Aeschylus' play. Metrical correspondences underline the fear of the chorus in their opening song (63), and the unrepeated melody of the epode (a lone concluding stanza) that ends the song creates unresolved tension after three repeated melodies of the strophic pairs (62-4). The structure of the great kommos (lamentation) reflects the process of transformation from mourning to revenge undergone by Orestes and Electra, while mention of the word 'mother' proves transformative and marks a significant musical shift in the song, whose scale is unparalleled in surviving tragedy (65-76). Marshall reminds us also that the final choral pair of the kommos, with its imagery of wounding, cures, and chthonic forces, form the epigraph to J.K. Rowling's Harry Potter and the Deathly Hallows (75). If an audience expected Agamemnon's ghost to appear, that expectation may have been redirected through the implication that the son is channeling his father's energy, perhaps evoked through a musical strain repeated from Agamemnon's entry in the previous play (78). Marshall also gives serious consideration to the proposition that Electra (and not her mother Clytemnestra) delivers the speech at 691-9, which expresses utter devastation at the (fictitious) news of Orestes' death. Without the attribution, Electra simply disappears from the second half of the play, and Clytemnestra appears inconsistent in her response to the news, while the implications for the assignments of actors' roles would enhance the surprise of Pylades speaking unexpectedly at 900-2 in a play where he is otherwise a mute character (98-101).

The final chapter, 'Matricide and Madness' (103-38), focuses on the frantic pace of the final third of the play. Again, Marshall's careful analysis of the architecture of the tragedy reveals how the choral song at 783-837 becomes a turning point for the plot, and how the final part of the drama is characterized by elements of ring composition that generate a feeling of closure (107-13). The scene in which Clytemnestra's lover Aegisthus appears is unusually short (113-16), and the final choral song whose subject is blood-guilt is structurally unusual in using mesodes (lone stanzas placed in the middle of a song) to interrupt corresponding pairs of strophes (stanzas) (123-6). Marshall also argues that the Furies may well have appeared in person at the end of Libation Bearers as an electrifying conclusion to the second play of the trilogy (131-8), and the proposition is compelling. The main chapters are followed by an appendix listing ancient illustrations related to the play, a glossary of Greek and technical terms, a guide to further reading, a selected chronology, notes to the chapters, a bibliography, and an index.

For all his focus on issues of performance, Marshall is always careful to signal elements of thematic significance and of textual complexity along the way. Orestes' decision to avenge his father is overdetermined, but the forces driving him are not irresistible and he makes a conscious choice (44-5). Arguments for and against the transposition of certain lines are carefully considered and explained (72-4). Nevertheless, Marshall's ability to communicate the excitement this play can generate on stage, along with the exquisite manner in which it has been crafted, are the most compelling aspects of this book. It may well be that Marshall's work will inspire further performances and adaptations of this hitherto underappreciated masterpiece.