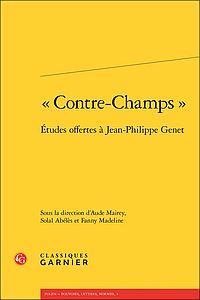 This celebration of the career and intellectual legacy of Jean-Philippe Genet provides a poignant reminder of how institutions, intellectual communities, historiographical context, and national narratives shape research and collaboration. Complementarily, the diversity of cultural, financial, and political developments covered in Contre-Champs illustrates the ubiquity of forces that draw human behavior and understanding into developing hierarchies of power.

Genet's career makes an impressively coherent argument for interdisciplinary, computer-enhanced, theoretically-informed, collaborative research in the humanities in general, and more particularly with respect to the history of cultural and political accumulations of power throughout Europe from the late medieval up to the modern period. Genet pursued his interdisciplinary and data-driven approach to the evolution of the state most significantly through his leadership of crucial collaborative research projects on the birth of the modern state funded by the CNRS (1984 and 1986) and European Science Foundation (1989-1993), and most recently, European Research Council (Signs and States: Semiotics of the Modern State, 2010-2014). Genet also served for eight years as the director of the Laboratoire de médiévistique occidentale de Paris (LaMOP).

His bibliography attests to his impressive contribution to the history of political ideas, the social history of the book, the role of the computer in humanities research, and medieval contributions to the rise of the "democratic, liberal and capitalist" modern state (401-425). [1] Matthieu Bonicel's treatment of Genet's contribution to the digital humanities includes a list of databases that Genet created or directed (115-116).

According to the editors' introductory remarks, Genet's ideas attributing the birth of the modern state to developments that took place in late thirteenth-century Europe were inspired by his mentors. The first, Kenneth Bruce McFarlane of Oxford, trained several of the leading English medievalists of the late twentieth century and also shaped scholarly understandings of the role of Bastard Feudalism in the late medieval English state (10). The second, Bernard Guenée, known for his interest in the cultural expression of power (22), brought Genet and other influential scholars of medieval French institutional, cultural, and intellectual history into close intellectual collaboration through his seminar at the Sorbonne (11).

McFarlane and Guenée encouraged Genet's enthusiasm for investigating the late medieval origins of modern state, with particular attention to the transition from feudalism to capitalism, the political role of the post-Gregorian Reform church, the economic growth of the medieval European economy, and the augmentation of royal power through incessant warfare (24). Genet's interest in comparative history and long-term developments, however, encouraged him to broaden his definition of the state to include "the entire system of power which exercises rights over a particular territory" (26).

Solal Abélès and Fanny Madeline's account of Genet's limited influence on English and Italian scholarship, while fairly critical of English historiography (72), provides crucial insights into how national narratives shape historiography and perhaps create debates that unnecessarily hinder international collaboration and comparison. For instance, the English scholar Rees Davies has argued convincingly that the diversity of medieval polities precludes a workable definition for the medieval state and that focusing on the state, for which ample documentation exists, draws attention away from other significant centers of power and socio-political discourses. [2] Genet, however, understood the state to be diffuse, diverse, and polycentric. [3] The chapters collected in Contre-Champs embody this fluid understanding of the evolution of power relations as much as they embrace a diverse range of locations from which to view the construction and activation of social and symbolic power claims.

The steady pressure of state centralization is evident in Emmanuel de Crouy-Channel's account of how the need for sufficient horses to pull artillery wagons encouraged the creation of a new branch of royal administration supported by increased taxes. Philippe Bourgès provides a similar account of royal centralization in his depiction of the interventions into city government and architectural planning that the Parlement of Paris and Louis XII made in response to the collapse of the Notre Dame Bridge into the flooding Seine in October 1499. Both of these chapters also pay careful attention to local concerns, but these concerns are subordinated to the pull of royal institutions and expansionary pretensions.

Jean-François Cauche uncovers more localized and contested power claims in his investigation of the aristocratic strategy of guaranteeing loans for family members and vassals as a means of preventing the alienation of territory by landholders who were frequently forced to borrow money from increasingly wealthy town merchants. Also focusing on local contests of power, Ludmilla Acone characterizes the many dances held as a marriage retinue passed from the bride's home to that of her spouse as strategies of political discourse that employed allegory and myth to explore the relationship between the betrothed, their families, the wider world.

Genet's particular application of Pierre Bordieu's terms "field" and "habitus" to late medieval English political theorists may best explain his strong interest in the medieval origins of the modern state as such works may theorize state powers both well after they come into being (34) and well before they exist. [4] As Yong-Jin Hong explains, Charles IV and Philippe VI sponsored crusade anthologies, which, in addition to affording them financial privileges, allowed them to cast themselves as legitimate heirs of Louis IX in rebuff to Edward III's claim to the French crown.

As Octave Julien explains, Bordieu's concepts apply well to medieval intellectual institutions, medieval genres, and medieval book markets despite medievalists' limited access to the biographies of medieval authors and readers. Rather, interrogating texts allows for the study of the flow of ideas within fields if careful attention is paid to lexicology, prosopography, and, as Chiara Ruzzier demonstrates, parchment thickness.

As a whole, the volume attests to the research possibilities opened up by Genet's ideas and methods for further study of the ubiquitous and complex nature of power negotiations.