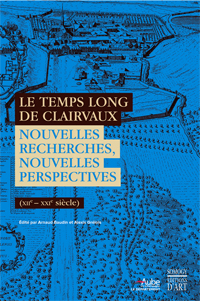 The present volume includes nineteen scholarly articles constituting the Proceedings of an International Conference held at the Centre des Congrès in Troyes on June 16 and 18 and at Clairvaux Abbey on June 17, 2015, immediately preceding a meeting of the Members of the European Charter of the Cistercian Abbeys and Sites (www.cister.net, accessed 22/05/2018). This publication followed closely after Clairvaux. L'aventure cistercienne [1], an impressive art book of large size and consequential weight which includes as well as a collection of scholarly articles - all written in French -, a Catalogue of the Exhibition held by the Conseil général de l'Aube, June 5-Nov. 15, 2015 to celebrate the 900th anniversary of the foundation of Clairvaux Abbey.

The purpose of the present volume is not nearly as clear. In fact it suffers from its ambivalence: the desire to attract an audience of non-specialists is obvious but at the same time more is expected of the reader than would be normally asked of the general public. Even though its size is more modest (408 pages; 24 cm) than that of the earlier volume, the numerous illustrations and high quality glossy paper, appropriate for an art book, make it awkward to use it as a resource for study or research because its weight makes it unwieldy. In fact the chosen format does not seem to be a good match for the contents of the volume. The large number of photographs (over 50) certainly enhances the esthetic appeal but quite a few are superfluous, such as the photograph of a page from the Grand Cartulaire de Clairvaux (Ill. 4, 128), or that of a 1226 charter (Ill. 5, 131) since the transcription of these documents is not given. Similarly Ill. 2, 172-173 and Ill. 3, 172 are not vital to the understanding of the text. This approach is occasionally coupled with a lack of an appropriate reference system. For instance Félix de Verneilh's L'Architecture byzantine en France: Saint-Front de Périgueux et les églises à coupoles de l'Aquitaine (Paris 1851), is mentioned as Félix de Verneilh, L'Art byzantine, without a footnote (307).

Publication was achieved less than eighteen months after the June 2015 Conference but there was a price to pay for this fast pace. Translations of the three articles written in English (Stöber, Jamroziak, Lester) and, more problematically, of the one article written in Portuguese (Fernandes Marques) are not provided. At the end of the volume summaries of the articles are given both in French and in (mostly) non-idiomatic English. The editing is also not always as careful as one might have liked: the lack of consistency in the capitalization of the noun Cistercien vs cistercien and orthography (Clervaux, 158) are slightly annoying; the format adopted for the footnotes is cumbersome and made worse by the absence of bibliographies. Cross-referencing between the articles is also sorely lacking. A more serious flaw is that the volume opens with the transcriptions of three short speeches given by local personalities for the opening of the Conference instead of the expected editorial preface which could have been helpful in bringing a sense of unity to the volume. This is somewhat mitigated by a conclusion "Clairvaux, work in progress" by Isabelle Heullant-Donat which brings out the usefulness of the various contributions.

The point of view taken by a few authors (in Part 1: Vauchez on Bernard de Clairvaux Studies, Noblesse-Rocher on Cistercian studies in the Humanities and in Biblical studies; in Part 3: Grélois on Nuns in the Cistercian order; and in Part 4: Demarthe on Cistercian Art, Claude Andrault-Schmitt on Claravallian architecture in northern Aquitaine) is that of a tour d'horizon, a review of past and current research on the chosen topics. This is of limited use to specialists - except in the case of Andrault-Schmitt whose scope is narrower - and non-specialists could easily be misled as a few key studies are missing. Cases in point are that none of the articles by Elizabeth Freeman on Cistercian Nuns in Medieval England are mentioned in Grélois, and that Demarthe leaves aside Peter Fergusson's Architecture of solitude (Princeton 1984), Terryl Kinder's Cistercian Europe: architecture of contemplation (Grand Rapids 2002), translated as L'Europe cistercienne (Paris 1999), as well as the more recent volume Terryl Kinder coedited with Roberto Cassanelli Cisterciensi: arte e storia (Milan 2015), translated as The Cistercian arts: from the 12th to the 21st century (Montreal 2014).

Grélois' vehement criticism of Constance Berman's plea for a reconsideration of the history of the Cistercian order (160) omits to mention the more positive and more balanced reviews of her work such as those by Giles Constable (The English Historical Review 115 (2000) 1267-1268), Martha G. Newman (The Catholic Historical Review 87 (2001) 315-316) and John H.van Engen (Speculum 79 (2004) 452-455). Certain opinions appear to be somewhat biased. In fact my own research on Cistercian monasteries in Brittany [2] corroborates the findings of Berman in the south of France so that the objection raised by Franz J. Felten (Historische Zeitschrift 285 (2007) 448-452, here 449-451, quoted by Grélois, n. 34, 160) that the situation of the monasteries on which Berman based her arguments might be exceptional and should not lead to a reconsideration of the history of the Cistercian Order in its entirety needs to be qualified. It could be that the integration of eremitical and other establishments into the Cistercian Order is characteristic of 'outlying areas' that Felten opposes to the 'core' of the Order. In any case a thorough investigation of the question is needed and this is precisely the kind of reconsideration that Berman's work has inspired. Incidentally Cariboni in Part 1 also takes up the question of the origin of the Cistercian Order and mentions Berman's contributions with a more balanced point of view (39-40). This is a case in point where cross-referencing between the two articles would have been useful.

Part 2 is comprised of five informative surveys of the spread of the Cistercian order in countries for which studies are often not readily available in France in printed format: Turcus on Hungary and Transylvania, Stöber on Catalonia, Peters-Custot, Fernandes Marques on Portugal, Jamroziak on the British Isles. As mentioned earlier, it is regrettable that Fernandes Marques and Jamroziak's contributions have not been translated to make them more accessible to a wider public.

The remaining articles in Parts 3 and 4 deal with more novel topics, such as a definition of Reform as interpreted by Bernard of Clairvaux (Cariboni), an inquiry into the role of the Porter of Clairvaux (Lester), the Norman Claravallian abbeys as places of exchange and hospitality (Vincent), the granges and urban properties of Clairvaux Abbey (Blary), the relations of Clairvaux Abbey with the neighbouring town of Bar-sur-Aube as evidenced by ca. sixty previously unpublished documents (Chauvin & Vilain); scholastic culture in the library of Clairvaux Abbey (Fournier); and Cistercians and the Great Western Schism with a focus on the role played by Matthieu Pyllaert, Abbot of Clairvaux (Millet). Marceau and Leroux's topics both extend outside of the Middle Ages. The former examines the way in which the commendam system affected Clairvaux from the XVth to the XVIIth century while the latter retraces the stages of the construction of Clairvaux Abbey and its transformation into a prison in the early XIXth century. This prison, now called 'Maison centrale de Clairvaux', is still in existence but is scheduled to close in 2022.

In spite of its obvious flaws and occasional redundancies this volume contains enough valuable contributions on topics which are often off the beaten path to be essential reading for scholars with a keen interest in Cistercian Studies.