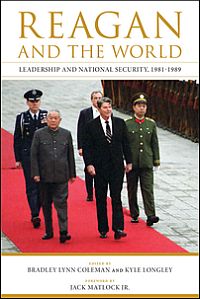 Ronald Reagan still polarizes scholarly research unlike any other former President of the United States. Over the last couple years, several essay collections have shed light on his grand strategy and his political legacy. [1] What makes Bradley L. Coleman and Kyle Longley's volume special is that it offers a sophisticated and balanced analysis of a complex president and his even more complex national security architecture. In doing so, it copes with a central problem of the Reagan historiography: the very fact that, depending on political affiliations, scholars have only seen the Reagan they wanted to see in the first place. The bipartisan approach has already been positively reviewed by the FAZ. [2]

Based on recently declassified records, the book gives a nuanced view of Reagan's leadership and foreign policy. It began in 2013 as a project of the Adams Center for Military History and is composed of three parts that are aligned in concentric circles, reaching from the center of decision making to the periphery of American power. Among the fourteen contributors are twelve scholars and two former national security professionals. Unfortunately, six additional articles by Lou Cannon, Alan Dobson, Svetlana Savranskaya, David Glantz, Jacob Kipp and James Hentz are only available online. [3]

Part one focuses on the president and his national security establishment. James G. Wilson's chapter illustrates Reagan's emergent strategy and shows that the peaceful ending of the Cold War was due to a mix of principles and tactical adaptability on both sides of the Iron Curtain. [4] Wilson breaks the traditional bipartite narrative and emphasizes that Reagan wanted to engage the Kremlin from the very beginning of his presidency (18). Nevertheless, he regards Gorbachev as the "key variable" in US-Soviet rapprochement (27). Beth A. Fischer repeats her influential point that Reagan detested nuclear weapons due to his deeply held moral convictions. [5] Unlike his closest advisors, Reagan rejected the system of mutual assured destruction and wanted to replace it with "mutually assured survival" (36). Fischer helps to explain Reagan's metamorphosis from hawk to dove but one could challenge whether he regarded nuclear weapons as a bigger threat than Soviet communism (33). Ronald J. Granieri's outstanding chapter on Caspar Weinberger reveals more about Reagan's contradictory convictions than about the Secretary of Defense himself, who was "[n]either a rubber stamp nor merely a foil for the other leading men in the administration" (76). The appointment of Weinberger and George Shultz reflected both the president's hardline and conciliatory intentions, which were both equally part of his foreign policy and made him an "antinuclear hawk" (75). The same complexity can be found in Weinberger's character, who, in contrast to his hardline image, had both a conservative and creative-evolutionary trait (68). With the Goldwater-Nichols Defense Reorganization Act of 1986, James R. Locher III contributes the only chapter on domestic legislation. Even though the military's transformation had a wide-ranging impact on the American way of warfare, the Act did not originate from the executive branch (Reagan and Weinberger were anti-reform or inactive), which is why this chapter does not touch on presidential leadership.

The second part of the book sheds further light on the Soviet Union and Europe. Archie Brown analyzes the interplay of Gorbachev, Perestroika, and the end of the Cold War by demonstrating how the new General Secretary removed the ideological justification for the global conflict by rejecting its zero-sum character and supporting the idea of common values and interests (124). Brown argues that Gorbachev was neither forced into reforms by Reagan's hard line policy or that he had no alternative but to reform. [6] James Cooper highlights Reagan's relationship with Margaret Thatcher against the backdrop of her first visit to the US, the Falklands war, and the Grenada invasion. Here he makes it clear that the "special relationship" at times wasn't so "special" after all. Despite their mutual admiration, both Reagan and Thatcher were pragmatists who, if necessary, followed individual national interests while always backing each other (142). William I. Hitchcock's thematically dense contribution on Reagan and Mitterrand demonstrates that French-American relations benefited from their leader's shared antipathy towards communism. Given the geostrategic importance of West Germany it seems doubtful that France "became America's most valuable ally in Europe" during the eighties (152). David F. Patton's essay on the INF debate and West German domestic politics unfortunately ignores the latest German-language literature, neglects the role of the FDP coalition partner, and pays no attention to Gorbachev's influence [7].

The book's final section focuses on Asia, Latin America, and the Middle East. Michael Schaller shows that in US policy towards China and Vietnam there was also a Reagan reversal. Normative considerations gave way to realpolitik when, in a "dramatic change", Reagan silenced his pre-residential support for Taiwan (206). His second term also saw progress with Hanoi after he quietly gave in on the issue of Vietnam War POWs. Kyle Longley is highly critical of Reagan's leadership in Central America and his handling of the Iran-Contra affair. In what he calls Reagan's "obsession", Longley highlights the president's "brazen disregard for the Constitution [and] the trampling of civil liberties" (231). Given the fact that ecological issues were of marginal importance for the Reagan team, Evan R. Ward's chapter on environmental policy towards Mexico appears to be misplaced within the book's overall context. Charles F. Brower's well researched chapter on US-Lebanese relations however emphasizes Reagan's disorientation in the Middle East. As a "stranger in a dangerous land" neither Reagan nor his staff understood the strategic environment or were capable of prioritizing American interests (286f.). In the last chapter, Ryan Carpenter surveys memoir and manuscript sources of the administration's key players, which is a helpful addition for historians just beginning their primary source research on the Reagan presidency.

In conclusion, the weakest chapters in the book would better have been replaced by some of the more illuminating articles online. Furthermore, with the positive exception of Wilson (working with FRUS), Granieri (Weinberger papers), and Brower (Ronald Reagan Presidential Library), the book does not deliver on the declassified records that it promised. A final summary chapter on the major findings would also have been greatly beneficial to an overall understanding of Reagan's global security architecture.

Overall, this book assembles some outstanding experts who broaden our understanding of the continuities and turning points in American foreign relations during the final decade of the Cold War. It leaves us with the impression of a multi-faced president, who neither was the hawkish hero who ramped up defense and defeated communism nor the dovish visionary who engaged adversaries and abolished nuclear weapons. His often-contradictory approach to international relations gave him great tactical flexibility. As all grand strategists do, he gave different answers to different circumstances across time and space. Historians must live with the fact that there is no "real Reagan" and embrace the ambiguity of his presidency. There is nothing wrong with that, given the fact that even his wife, Nancy, admitted that she never really got to know him. [8]

[5] First published in Beth A. Fischer: The Reagan Reversal. Foreign Policy and the End of the Cold War, Columbia/MO 1997.