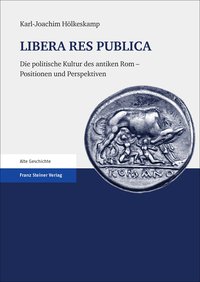 Dear reader, please pause a moment to bring to mind your preferred handbook on the history of the Roman Republic, regardless of its language or date of publication. That book possibly presents a chronological development of that period (or a thematic approach, if it was published in the latest decades); it probably describes the composition of the Roman government, and explains the main events and historical developments that brought the Republic from its "classic form" to its "end".

The book under review is not such book.

In fact, Libera Res Publica. Die politische Kultur des antiken Rom - Positionen und Perspektiven, by Karl-Joachim Hölkeskamp, offers a much suitable example to clarify to advanced undergraduates or postgraduate students the difference between explanation and analysis. In all likelihood, most of the manuals recalled beforehand mainly explained the Roman Republic; in his book, Hölkeskamp analyses the Roman Republic, more specifically its political culture.

In 2004, Hölkeskamp published Rekonstruktionen einer Republik. Die politische Kultur des antiken Rom und die Forschung der letzten Jahrzehnte (translated into French in 2008, into English in 2010, and into Italian in 2016). He has not been idle since then: the book under review collects works from 2005 to 2016 that have been published in various journals and collective books. Bibliography has been updated and some sections have been shortened to avoid repetition.

Why should the reader spend 59 € of her or his own pocket (or the library's budget) to buy a collection of articles? A bibliography of fifty-six pages (more on this later), a useful resource to be up-to-date in Roman Republican studies, represents one of the reasons, together with the convenience of having all the updated articles at hand. But the main reason is that, when collated together, Hölkeskamp's work of the latest eleven years offers a coherent, in-depth and sometimes controversial study on the political culture of the Roman Republic, beyond his well-known debate about such matter with Fergus Millar. [1] In fact, the subtitle of the work says it all: the book offers the author's own position and his perspective upon the topic.

Although no headings appear on the table of contents, the articles that compose the book are ordered thematically: forefathers (chap. 1 and 2, on Mommsen and Münzer, respectively), concepts and theory (chaps. 3-4), consensus (chaps. 4-7), memory (chaps. 8-9) and the crisis of the end of the Republic (chap. 10).

As previous readers of Hölkeskamp's work are aware of, the author of the present book is one of the ancient historians who have approached the study of the discipline through the lens of theoretical concepts, borrowing and having a dialogue with other disciplines (such as political science, anthropology, sociology, and law) but also with historians from other periods of history who have tackled similar questions (e.g. elites, legitimacy or status, among others). Thus, Niklas Luhmann, Clifford Geertz, Pierre Bourdieu and Georg Simmel, along with contemporary scholars, are regularly cited and discussed throughout the book (this reviewer wonders about the absence of Michel Foucault or Steven Lukes from the theoretical discussion, since many of their hypotheses and concepts about power could have been put to use to understand the Roman Republic). The use of theory makes the book occasionally a challenging read.

Let us focus on the main concept, that of "political culture", as a way to evaluate the book and show the range of Hölkeskamp's approach. In the third chapter, he offers a wide-ranging view of the concept of "political culture": its origins, developments, varieties, relationship with other historical periods and, finally, some small test case scenarios in which "political culture" is applied to the politics of the Roman Republic.

"Political culture" is linked to the birth of the multiple "turns" (linguistic, cultural, communicative, to name the most relevant ones), alluding to a paradigmatic change in information theory. Politics becomes a space of negotiation and communication, built discursive and symbolically, an Entscheidungshandeln. Language, related to politics, is constituted by a repertoire of ritual and symbolic ways of communication between different actors, carried out through performative practices (rituals, ceremonies, feasts, etc.) but also images and monuments, all of which carry codified contents and messages that are understood by all participants (participative comprehension). This process takes place in a hierarchical context. Thus power, conceived as multidimensional, is understood as a communicative relationship. In this sense, the concept of political culture is closely linked to other disciplines, such as social and cultural anthropology, communication theory or sociology of knowledge, as well as in dialogue with other historical periods.

Applying these abstract concepts to the study of the Roman Republic, Hölkeskamp highlights the importance of describing Roman political culture as an "Ensemble von Texten" (91, meaning Text in the large sense of the concept), in which each part has its own logic and its own function. It is a government through civic rituals, through which the different parts that compose the Roman State enter into dialogue: e.g. the triumph (as symbolic communication between the triumphator, the political class and the populus Romanus), or the pompa funebris (analysed in chap.7 as an interplay of hierarchies and consent). Political rituals not only showed the representation of the power, but ensured their generation, stability and reproducibility of the hierarchies and authority. The comitia, contiones and concilia represented their scenification, as rituals of establishing hierarchies and equality at the same time (especially analysed in chap. 6). According to Hölkeskamp, "government by ritual" defines perfectly the Roman Republic.

The author also focuses on the topic of memory in relationship with material representation in the Roman Republic, and studies how monuments carried meaning and also acted as meaningful ways through which the aristocracy displayed itself (chap. 8-9). This calls back to some important concepts treated in previous chapters, such as consensus, competition and Prominenzrollen, habitus, and symbolic capital, among others. Hölkeskamp analyses, for instance, how new marks of distinction in the Late Republic beyond military victories (e.g. religious distinctions, rhetorical success or juridical success) were changing the rules of the field (especially in chap. 4).

There is much to discuss in 327 pages, even some to disagree about, but a detailed examination would go beyond the boundaries of a review. This reviewer, for instance, is not convinced about the degree of hierarchies that Hölkeskamp proposes, and disagrees about the limited role of the people (even though the author notes the high degree of integration of the people in civic rituals, such as pompae, it is only as a way to confirm the consensus and reinforce stability, that is, as a complementary but also compensatory function that ensures the ritual reproduction of a hierarchical order; 234-236). [2]

As mentioned before, the book ends with an extensive bibliography, in which books and articles in German, French, English, Italian and (to a lesser extent) Spanish are cited. This reviewer would like to bring attention to such fact, which should be applauded and considered as a standard to follow. In the current academic world and thanks to new technologies, it is easier than ever in history to have access to references in all modern languages, what offers the possibility to achieve a truly and fruitful international dialogue and discussion upon subjects as the Roman Republic. Therefore, Hölkeskamp distances himself from the tendency, regrettably still in practice, of books and articles that mention items almost exclusively written in the mother tongue of the author, with a few exceptions sprinkled here and there precisely to avoid the accusation of academic monolingualism.

In sum, in Libera Res Publica. Die politische Kultur des antiken Rom - Positionen und Perspektiven there is much to learn, to debate, and to ponder. Those are the marks of a good book.

[1] A summary and reflection on the debate in Frédéric Hurlet: Démocratie à Rome? Quelle démocratie? En relisant Millar (et Hölkeskamp), in: Rome, a City and Its Empire in Perspective. The Impact of the Roman World through Fergus Millar's Research, ed. by Stéphane Benoist, Leiden 2012, 19-44.

[2] Studies of the Roman political culture from a bottom-up approach (a topic on which further work is needed) have suggested a more dynamic vision of the interaction between elite and the people during the Republic. Cf. Cyril Courrier: La plèbe de Rome et sa culture (fin du II siècle av. JC-fin du Ier siècle ap. JC), Rome 2014 or, if the reviewer may, Cristina Rosillo-López: Public Opinion and Politics in the Late Roman Republic, Cambridge 2017.