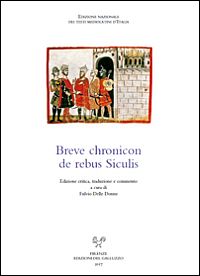 The Breve chronicon de rebus Siculis is an anonymous Latin chronicle that has survived in three manuscripts dating from the fourteenth to the eighteenth centuries in the Biblioteca Apostolica Vaticana and the Biblioteca Nazionale Vittorio Emanuele III in Naples. Beginning with an account of the Norman conquests in southern Italy and Sicily, the Chronicon presents the Normans as 'powerful' models of pious rulership. King Roger II is remembered for his piety whilst king William I is commemorated more ambivalently as a homo quasi inutilis who was, nevertheless, a pious and merciful ruler whose manful opposition to rebellion restored peace. Indeed, king William II's management of the peace and prosperity of the kingdom is compared to the Prophet Ezekiel's description of the garden paradise of Eden.

For the author of the Chronicon, the Hohenstaufen conquest did not extinguish this line of kings. Instead, Guiscard's lineage was preserved through Roger's daughter Constance. Thus, following a cursory report on the death of Henry VI and Frederick II's turbulent minority, Frederick assumes the central narratological role as the heir to both the Norman and Hohenstaufen patrimony. The Chronicon's most significant episode relates to Frederick's crusade of 1228-1229 which begins as a series of annals written in the first person. Here, the Chronicon reports Frederick's preparations and gives details of the ports, cities and landmarks of the voyage to the Holy Land. Celebrating Frederick's progress through Outremer, the narrative reaches its climax with Frederick entering the city of Jerusalem, having restored the city to Christian rule. From here, the Chronicon records Frederick's struggles against the north Italian communes. In the Vatican codices, the text concludes with the death of Frederick in December 1250, and includes a continuation in the form of the emperor's last testament. In the Neapolitan codex, the text extends until the battle of Benevento in 1266.

Accepting the textual title that was first coined by Alphonse Huillard-Bréholles, Fulvio Delle Donne begins by placing the Chronicon within the context of Frederick's crusade before explaining the Chronicon's structure and textual variations. Maintaining a focus on the manuscripts, Fulvio Delle Donne demonstrates how such variations are often considerable and he emphasises their bearing on the interpretation of the text. For example, the Neapolitan manuscript entirely omits Frederick's entry into Jerusalem. Reluctant to accept the possibility that the Chronicon is a compilation, Fulvio Delle Donne concludes that the textual variations are the culminative product of an active textual tradition; the author's archetype being subject to considerable alternations at the hands of later copyists.

Thus, like Wolfgang Stürner, Fulvio Delle Donne concedes that the editor is faced with considerable difficulties in establishing an authoritative text. Approaching questions of authorship and dating, Fulvio Delle Donne provides an overarching summary of previous scholarship. Citing the authorial hypothesis of Enricho Pispia and Wolfgang Stürner - that the text was likely composed by a south Italian ecclesiastic in the court of Frederick II - he is careful to strike a measured tone in accepting many of their conclusions; here, Delle Donne provides an important individual contribution by analysing the evidence for the author's participation in Frederick's crusade.

This same careful method characterises Fulvio Delle Donne's approach to Wolfgang Stürner's dating thesis which concluded that allusions to the prophecies of Joachim de Fiore, and mention of the city of Manfredonia, appear to date the text to 1272. Whilst indebted to Wolfgang Stürner's scholarship, Fulvio Delle Donne offers an innovative modification. In identifying similar prophetic allusions in texts from the mid-thirteenth century, he urges caution in his suggestion that this section of text may be an interpolation. In so doing, Fulvio Delle Donne readily accepts that the text could have been composed as early as the late 1260s. From here, he introduces a methodological discussion of his 'metodo ecdotico' which compliments his exploration of the vexed questions concerning 'testi liquidi' across the comparative sources of south Italian historiography. Concluding, Fulvio Delle Donne gives a survey of the surviving manuscripts, previous editions, and explains the organisation of his own edition.

In no instance does Fulvio Delle Donne's textual editing represent a radical departure from Wolfgang Stürner's edition. Nevertheless, his edition differentiates itself by making greater use of variant readings in the Neapolitan manuscript. The edition contains some refined readings, the text has been subdivided into chapters, and the accurate facing-page Italian translation lends the volume to use by students and medievalists alike. The indices are compact but serviceable.

However, the edition is not without its problems. At the start of his introduction, Fulvio Delle Donne expressly focuses on the Chronicon as a valuable source for Frederick's crusade. As if to emphasise this interpretation, the cover displays an illumination depicting Frederick II and al-Kāmil (BAV, ms. Chigiano L VIII 296, fol. 75r) and the indices contain seven maps charting Frederick's voyage. Whilst he persuasively justifies the Chronicon's importance in relation to the events of 1228-1229, this often becomes a narrow argument that is pursued at the expense of wider conclusions. Thus, it is to be regretted that Fulvio Delle Donne's attempt to provide the foundation for a new interpretation of the Chronicon neglects to further Wolfgang Stürner's conclusions concerning the historiographical implications of the text's representation of both emperor and empire. This decision has clear implications for the breadth and depth of historiographical analysis in this edition. Furthermore, despite a useful commentary, the edition's critical apparatus does not lend itself to ease of use. The footnotes containing the rejected variant readings are difficult to localise within the main body of the text and are often spread across two pages; these variant readings are considerably less extensive than in the edition of Wolfgang Stürner. Indeed, it is rare that Fulvio Delle Donne includes a textual variant that has not already been identified by Wolfgang Stürner.

Nevertheless, he has succeeded in producing an edition which will surely prove a valuable tool for the study of the Chronicon. He deserves much praise.