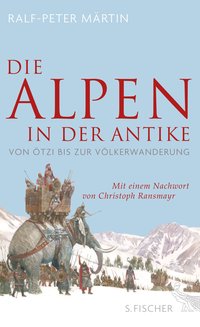 The title of this volume sets an ambitious task: to relate the history of the Alps from the time of Ötzi the Iceman (c. 3,300 BCE) up to the migration of peoples in the early medieval era. The history of the Alps continues to be an area of significant interest for researchers, with recent contributions to the study of the modern politics, tourism, mountaineering, and aesthetics of the Alps including Peter H. Hansen's Summits of Modern Man: Mountaineering After the Enlightenment (2013) and Ann C. Colley's Victorians in the Mountains: Sinking the Sublime (2010).

However, Die Alpen also belongs to an older tradition of surveys of Alpine history, following in the footsteps of such mountain-lovers and writers as W.A.B. Coolidge (who made the first winter ascent of the Jungfrau in 1874, and published The Alps in nature and history in 1908), G.R. de Beer (evolutionary embryologist and Alpine historian with a particular interest in Hannibal), and Claire Eliane Engel (literary scholar and translator of the writings of Leslie Stephen, a prominent early Alpine mountaineer). Thanks both to subsequent discoveries regarding the prehistory of the Alps, and Martin's lucid and dedicated approach to his subject, this volume offers a new and accessible introduction to the early history of the Alps for a modern general audience.

Martin's seven chapters cover, in chronological order, the broad temporal swathe indicated by the book's title, although each approaches a specific era through a distinctive theme or entry-point. Martin begins by introducing the reader to an individual, with the figure of Ötzi the Iceman and the various mysteries surrounding him offering a route into understanding the distant era of the Copper, or Æneolithic Age. The human scale is maintained but expanded in the second chapter, in which the Bronze and Iron Ages are explored through the lens of economics and production.

The figure of Hannibal - with a focus not just on his remarkable acts but also his education, motivations, and inspirations - provides an inevitable window into the Second Punic War and the Carthaginian crossing of the Alps. Hannibal's celebrated Alpine crossing finds it counterpoint in the fourth chapter, which tells the ultimately disastrous story of the departure of the Cimbrian and Teutonic tribes from their Jutland home and their annihilation at the hands of the Romans after initial martial successes (113-101 BCE). Martin bookends this chapter with poignant glimpses at those 'left behind' who, when a Roman fleet approached their shores in 5 CE, begged forgiveness for the crimes of their wandering ancestors and handed over a sacred cauldron as a token of their subjugated friendship.

The fifth chapter considers the Alps as a logistical space as well as a political one, demonstrating that from around 200 BCE onwards the Romans expanded their empire and managed the numerous mountain ranges within it by doing what the Romans most famously did best: constructing roads and passes. The final two chapters race through centuries of upheaval, change, and qualified continuity. The sixth chapter emphasises that, despite of war, disease, migration, indeed the fall of the Western Roman Empire, Roman culture continued to hold sway in the Alps into the 8th and 9th centuries CE. However, as the seventh chapter implies, the final victory ('Den endgültigen Sieg', 171) in the Alps went not to Hannibal or the Romans, but to Christianity. The closing image with which the reader is left is one of cultural transition: of the construction of the Great St Bernard Hospice in 1049, a foundation which survives to this day, whilst the nearby temple of Jupiter - a remnant of the Roman culture which had dominated the Alps for so long - fell into ruin.

A pleasing result of this variety of approaches is that Martin succeeds both in covering the vital 'great events' of Alpine history, whilst also offering insight into the textures of daily life. For example, in the second chapter Martin traces the various changes - evident in the archaeological record - which took place between the third millennium BCE and the end of the Iron Age (c. fifth century BCE). He does so through a focus on the quotidian details of everyday life: the foods people ate from era to era, how they interred their dead, what kinds of animals they farmed, and what methods they used to remover either copper or iron ore from the ground. Taken together with wider discussions of military invasion and expansion, migration, and religious developments, the reader gains an appreciation of both the extraordinary and the ordinary incidents of Alpine existence.

Throughout, the fascinating content of Martin's narrative is bolstered by his deployment of compelling quotations from original stories, the inclusion in the volume of frequent and generous illustrations, and above all by his style. Martin pairs the communication of factual data with compellingly-phrased and imaginative glimpses into long-lost scenes. Take, for example, his conclusion to a paragraph explaining the Roman attitude towards the Second Punic War, and the rituals which preceded their joining of it: 'Die zuständigen Priester [...] tauchten die Lanze des Krieges in das Blut eines Opfertiers und warfen sie symbolisch ins Feindesland [...]. Ein gerechter Krieg war eröffnet und damit die Hilfe der Götter gewiss.' (58: The leading priest [...] dipped the lance of war into the blood of a sacrificial animal, and threw it symbolically into the country of the enemy [...]. A just war was declared and the help of the gods was assured').

The quality of and the contribution made by this volume becomes even more impressive - and poignant - when the reader reaches the acknowledgements and the afterword by Christoph Ransmayr, which reveal that Die Alpen was written in the year between Martin's diagnosis with ALS, and his death from the same disease. As both Martin and Ransmayr reveal, the degenerative disease rapidly took away Martin's ability to walk, speak, and swallow - but not his ability to think and, with the tips of two fingers, write the volume under review.

Christoph Ransmayr tells of Martin's own passion for mountains through the story of his painful ascent of the Donnerpass, or the Thorang La, in the company of a local mountain guide and the mountaineer and explorer Reinhold Messner. Martin - who had previously written of the modern-day drama of mountaineering in his 2014 Nanga Parbat: Wahrheit und Wahn des Alpinismus (Nanga Parbat: The Truth and Delusion of Alpinism) - loved the mountains and, as Ransmayr rightly highlights, possessed the ability to bring the past to life on the page in vivid colour.

In this, his last work, Martin draws these two characteristics together to great success, bringing to life not only the great battles of the Alps but also the rhythms of the daily existence of those who mined, hunted, and inhabited the mountains in centuries past. The circumstances in which it was written necessitated a greater brevity than perhaps Martin, and certainly many readers, would desire. Nevertheless, the result is a lucid, elegant, and accessible volume slim enough to fit into any mountaineer's coat pocket: and more than worthy of being placed alongside classics of Alpine history on any mountain enthusiast's bookshelf.