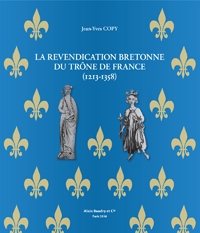 This book is a revised and abridged version of the author's Art History PhD thesis (Université de Rennes 2, 2010). As Michel Bur convincingly argues in the foreword, it is a plain thesis, with some very convincing and some less convincing suggestions. The main idea of the author clearly structures his work as he argues that for more than a century, the dukes of Brittany claimed for the throne of France. This is of course a polemic claim, as it challenges the usual narrative of Medieval France history.

Nonetheless, we have to acknowledge the author's rigorous work in using an up-to-date, impressive and thorough literature, making his arguments clear and not losing his audience in the complexity of Briton and Western French genealogies and political events. The numerous illustrations (mainly tombs, maps, and family trees) really help the reader through a dense subject matter. Additionally, the index is extremely detailed and useful, as it is not just a list of names but a commented index that helps the reader to easily find specific information. This book adopts a clear structure and does not try to hide any controversial point or to confuse his readers with jargon.

The author's argument is mainly focused on artworks (stain glasses and tombs) that are used to emphasize a cultural "propaganda" orchestrated by Briton rulers, interestingly, mainly women. One of the major interests of the book is the author's ability to extract from these artefacts lots of "political" messages, and not only purely artistic ones, even if the latter may also have a larger meaning. But as some of his suggestions raise questions, he would have made a stronger case by providing more details on the political, juridical, military, and administrative endeavours of Briton rulers that would have highlighted their rivalry with the Capetian and Valois kings. Even if initially designed as an Art History book, La revendication bretonne's focus on political matters could have been made more convincing once completed by a more exhaustive historical approach.

One would have expected this question to be addressed since the author regularly infers a deep political signification from the adoption of funerary and stylistic habits. If the "Parisian" artistic influence seems perfectly convincing, e.g. in the case of the tomb of Juhel de Mayenne (d. 1220), it is difficult to consider that it means more than an adhesion to an artistic mode, or to a political alliance. Stating that this is a way of claiming the ducal power over Brittany during the rivalry between the Avaugour and the Dreux is, however, less convincing, especially since the identity of the patron of the tombs is not always certain - a question that is not systematically addressed.

As mentioned earlier, this book is a thesis and what one may consider convincing may raise questions for others. We can for example wonder if the use of a French royal model - in the tombs - indicates a political ambition - to be seen as kings in Britanny - or more "modestly" a familial identity, since the Dreux originated from the French royal family. Additionally, the use of royal artefacts by Britons rulers may not only be a claim to the throne of France but a way of emphasizing their own power and identity. All the questions raised by the book are certainly important ones, even if we may not always agree with the author.

The real "partie de bravoure" of the book is the thorough study of the extremely numerous coats of arms displayed on the tombs of Alix de Thouars (d. 1221) and Yolande de Bretagne (d. 1272), now destroyed but once in the abbey of Villeneuve and never previously thoroughly studied (55-154). The author competently identifies them and gives a convincing reason for their presence, sometimes honestly presented as hypothetical. Given the fact that the coats were as numerous as 357 and known through two seventeenth-century drawings, such an endeavour required a thorough command of the French and English heraldry. This illustrates not only the purpose of the book, but also the importance of a "technical and genealogical study" of heraldic, that is addressing the very signification of these items from a political point of view. Which the author did, by emphasizing the political agenda displayed, that is a large family alliance that may challenge the king of France's power and establish the Britons as their equals, at least.

In conclusion, the author argues that matrimonial and political decisions taken by the kings of France have critically influenced the formation of the self-identity of the dukes of Britanny. The exclusions of the Britons from the succession of the kingdom of Navarre and from matrimonial unions they aimed for forced or led them to establish themselves out of or in rivalry with the royal family of France's orbit. Yet they regularly followed the French fashions, as if, despite everything, they could not but look to Paris to find ways to express their ambitions. Regarding the book's main argument, it seems stronger for the thirteenth than for the fourteenth century, especially regarding Charles de Blois. In any case, what tends to make the stronger impression on the reader may rather be a desire to be more than an earl or a duke of Brittany - say a king in or of Brittany - than to be regarded as the regular king of France.

This review was written in the context of the Music and Late Medieval European Court Cultures project. This project has received funding from the European Research Council (ERC) under the European Union's Horizon 2020 research and innovation programme (Grant No 669190).