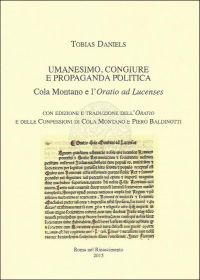 This is a scrupulously written and widely researched account of a conspirator-scholar who was motivated to revenge by his failure to achieve citizenship in his home state - a not unfamiliar topic today, but here it is convincingly explained by Tobias Daniels within the social and political context of its own day. In doing so, Daniels provides a revealing account of the underworld of Renaissance politics that is all too often described in terms of its civility and enlightenment, even tyrannicide justified as the heroic defence of freedom against tyranny. But although one of its objectives is to provide a more realistic explanation of Cola da Montano's life, classical ideas also play a part in the story, as the title suggests. So while the first half of the book is devoted to exploring the twists and turns of Cola's life, the second half discusses his writings, namely his Oratio ad Lucenses of 1478, his letter to Lorenzo de' Medici on 19 February 1482 and three weeks later, his long Confession. They are all edited in the Appendix (together with Piero Baldinotti's 1478 Confession), each text followed by an Italian translation.

Cola was born around 1400 in a small town in the mountains near Bologna, hence his name (he was possibly, according to local tradition, descended from Capponi emigrés). Son of a quite well-off agriculturalist with mercantile interests, he engaged in strong-arm tactics over land disputes in the 1470s and failed to gain Bolognese citizenship in 1480, ostensibly because he lived in the countryside (contado) - a background Daniels thinks helps to explain the violence of his life, after his initially smooth ascent into Milanese society. He arrived in Milan around 1460, having studied the liberal arts at Bologna university, and after combining work in the Sforza chancery with some private and university teaching, he was appointed professor of rhetoric in Milan university in 1468. Shortly afterwards he was associated, initially as a proof-reader, with two Milanese printing houses. So far, so good. But then in 1467 Cola apparently introduced three of his young students (from noble families who supported the former Visconti rulers of Milan) to Bartolomeo Colleoni, Venice's famous condottiere, who subsequently served as the link between various foci of dissent - that is, other Visconti supporters, Roberto Sanseverino (related to Francesco Sforza through his mother), and the Florentines exiled after the 1466 "Pitti" conspiracy. Although Colleoni died before the plot by the young nobles to assassinate Galeazzo Maria Sforza was carried out in 1476 (followed in 1478 by the so-called Pazzi Conspiracy against the Medici), he and Cola together provided the networks (extending to Burgundy, Rome and Naples) and the ideology that made them so deadly.

Inevitably, the untangling of this complicated web of conspirators and contacts does not always make for easy reading, which could also have been helped by a bibliography of titles cited in the notes. More layers of intrigue and circles of contacts are added to an already intricate plot when Colleoni was succeeded as Cola's patron by Sanseverino (whose contacts included two alienated Florentines, Alessandro degli Albizzi and Piero Vespucci, and the Pistoian Piero Baldinotti), then Ferrante, king of Naples (a new discovery) and finally Girolamo Riario, married to a Sforza. But the devil lies in the detail, and thanks to the detail that Daniels provides from a wide range of previously untapped sources - including poems and letters from archives in Italy and farther afield - we can now appreciate how wide Cola's network was spread.

As Daniels warmly acknowledges, his approach is indebted to the work of Riccardo Fubini, not only to Fubini's excursus on Galeazzo Maria's assassination and its links with the Pazzi Conspiracy in Lorenzo de' Medici's Lettere, vol. 2, but more generally to what he says about the "interconnectedness of events" and the need to project even particular events on to a broad canvas in order to understand them (Italia Quattrocentesca, 1994, 322). This is what Daniels admirably achieves in his book with his novel focus on Cola Montano, through whom he reveals how interconnected the seemingly localized events of two assassinations were, before reinterpreting their wider significance in the light of his writings as well as his life.

Although Cola's free use of terms like 'liberty' and 'tyranny' - especially in the Oratio ad Lucenses urging the people of Lucca to help the pope and king Ferrante to overthrow the tyrant Lorenzo - seems to support the generic description of him as a high-minded advocate of tyrannicide, Daniels suggests a different interpretation. The freedom with which he changed patrons shows a man obsessed with his career and the need for security, and when his attempt to get Bolognese citizenship in 1480 failed, he was driven to his last, but failed, attempt at tyrannicide by joining Frescobaldi and others in another plot to kill Lorenzo de' Medici in 1481. This owed less to ideology than to self-interest, and his appeal to Lucca to attack the tyrant Lorenzo in 1478 was also less influenced by Catiline than (according to Daniels) by the papal bull against Lorenzo that year and its new concept of the obedience owed to the pope as a sovereign monarch.

This reference to the influence of new political thinking on Cola and his writings in a sense closes the circle by returning to the ideas we need to reinterpret on the basis of new facts. It is useful to be reminded that new thinking about the papacy after its return to Rome, as well as what I have called 'the demasking of Renaissance republicanism', contributed to the new definition of tyrants and liberators. What Cola's social rise from the contado to a successful professional career in Milan (and thence to the patronage of nobles and kings) also demonstrates is the precariousness and danger such a rise involved - which may help to explain the puzzle of why the sons of other successful new men who were teachers and professionals, like Jacopo di Poggio Bracciolini, became alienated rebels. It is Daniel's achievement in this important book to show how the luck (fortuna) and danger that accompanied the rise of men like Cola Montano combined with ancient ideas to create one of the important dynamics of the Renaissance world.