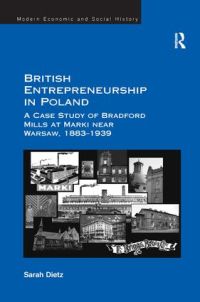 The economic and social history of Poland has always been inextricably linked to its political history. This dependence is particularly visible in the case of the textile industry in the 19th century. A new division of Polish lands took place after the Vienna Congress in 1815. In the Kingdom of Poland, the part of Poland joined to Russia, the textile industry was centred mainly around the Łódź district. The dynamic development of the textile industry, increasing rapidly from the 1870s, was possible when the Russian market opened wider for Polish goods, after the introduction of protective customs tariffs by the Russian authorities. Apart from the Łódź region, in the period of 1870-1880 a new centre of textile industry developed as a result of the influx of Belgian, French and German capital. Yet at the same time another centre of wool industry was set up with English funding in the town of Marki situated next to Warsaw. In 1883 Edward Briggs, a Bradford worsted manufacturer, his brother John and Bradford-based German merchant Ernst Posselt embarked on a visionary foreign enterprise in the Kingdom of Poland. Informing Russian administration and the British consul in Warsaw about their plans, they bought an estate in Marki where they founded one of the greatest and most modern worsted-manufacturing enterprises in Central and Eastern Europe, producing mainly for the Russian market.

The aim of the reviewed book is to show the fascinating history of a modern factory and workers' community in Marki against the backdrop of political, social and economic environment (for example the policy of the Russian Empire, protectionism, foreign competition, political and social instability especially at the beginning of the 20th century). The topic raised by the author is very important mainly because the Marki mills played a unique role in the Russian Empire textile industry and greatly contributed to the development of the Marki region.

The research objectives designated by Sarah Dietz have been fully met. This exceptional business venture is described vividly (organizational structure, investments, employment policy, modern marketing techniques to promote, product range, the role of the English capital in the development of the region, diffusion of British industrial technology et cetera). The overall functioning of the company is explored. The work presents a very important impact of British entrepreneurship on the industry development of in the Kingdom of Poland at the turn of the 19th century. Also the social dimension of the Briggs' activity was not without significance. Among others the Bradford men founded workers' housing estate in Marki and the building of an elementary school, which serves as a culture centre in Marki nowadays. They managed to integrate their interests with those of the local cosmopolitan.

The study is based on an impressive range of international and various sources including archival materials created by the Russian bureaucracy, records of the Warsaw Committee for Industry, letters, memoirs, contemporary Polish press, state industrial surveys, inspectors' and police reports as well as documents by the British Foreign Office. The issues have been highlighted by 19th-century literary works such as the novel Ziemia obiecana [The Promised Land] written by the Polish Nobel laureate Władysław Reymont.

The history of Polish textile industry belongs to the well-developed sections of Polish historiography. Against this background, previous research of Bradford Mills in Marki comes out quite poorly. Despite its importance and the fascinating circumstances of its original foundation very few Polish historians have been interested in the subject.

In spite of a significant number of sources available for this case study only several short articles appeared before the reviewed book was published. As it turned out, a foreign scholar was needed, with a great emotional involvement in the study. This personal interest was caused by the fact that Dietz was working at Briggella Mills in Bradford in the early 1990s and - as she admits - the story of the Bradford Mills in Marki was largely forgotten. Unpublished memoirs of John Hinchliffe, her late husband's great-grandfather, who had spent some years in Marki at the beginning of the 20th century, provided inspiration for her interest in the story of the mills in Marki. This personal involvement and the hard work of the author resulted in the most detailed and comprehensive study of the Bradford Mills in Marki depicted in a broad context of political and economic history of the late 19th century. The work is easy to read and receive because of its excellent narrative style and the language. Dietz has been conducting her research work for more than five years. As a result, the volume constitutes a substantial contribution to the industrial history of Poland and Britain.