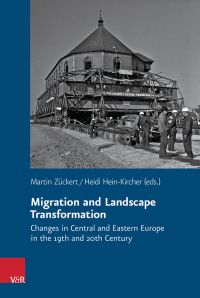 Landscapes are not simply static territorial entities. Landscapes hold different and changing functions which are attributed to them by human actors - for instance state authorities, intellectuals, entrepreneurs, and ethnic groups - to (de)legitimise (un)official narratives of the past, present, or future. As such landscapes are integral part of identity processes, economic development, social and political change, which transform and make use of natural environments. This implies that landscapes are continuously renegotiated by historical change.

Moving from these premises, the volume co-edited by Martin Zückert and Heidi Hein-Kircher discusses how migration has affected changes in landscape and its use. As the title suggests, Central and Eastern Europe in the 19th and 20th century provide the coordinates for this investigation. In the preface, Hein-Kircher explains that the theme the volume addresses is how environmental questions enlighten the study of societies, both as socio-economic realities and cultural constructions. Moreover, Hein-Kircher adds that the volume aims to contribute to the academic debate on the history of migration and the history of the environment by providing a survey of topics of interest which would suggest avenues for further research in both disciplines.

The volume presents nine book chapters and is divided in three thematic parts, which are, respectively, 'Planned Migration and Landscape Transformation', 'Migrants and Changes in Landscape', 'Interpretation and Dissemination'. Yet, the first essay, by Zückert, is left outside of the thematic subdivision. Although it is not an introduction to the volume, nor it is presented as such, the essay in part has this function. In fact, Zückert gives a broad overview of different uses of landscape for cultural, political, and economic purposes in the changing ideological landscapes of Germany and central Europe in the 19th and 20th century, as well as of some of the migration phenomena which shaped and were shaped by these shifts.

The following eight chapters are empirical case studies which rely on a variety of approaches and sources. Yet, while all of them deal with notions and uses of landscape, only some engage with the question of the interrelations between migration and landscape transformation. This is the case, for example, of the thoughtful piece by Volodymyr Kulikov on demographic and socio-cultural dynamics engendered by labour migration during the industrialisation of Donbas. How migration and landscape interact in the (de)construction of national identities when territorial borders and cultural boundaries of the nation do not overlap is explored by Tadeusz Janicki and Aivar Jürgenson, who analyse, respectively, the role played by planned migration in the elaboration and implementation of the ideals of landscape by the German occupiers of the Polish region of Wartheland, and the stages and legacies of the construction of Siberia as an Estonian landscape by Estonian colonisers.

Other authors discuss migration and landscape but the interrelation between them is not the main topic under investigation. For example, Ondřej Daniel examines how Yugoslav migrants' nostalgia conceptualises homeland, the latter being related to ideals and ideological understandings of landscape. Stephanie Zloch's analysis is about how ideas and conceptions of landscapes are discussed in German, Polish, Russian, and Lithuanian textbooks. The differences in the treatment of the forced migration at the end of World War II is presented as an example. Similarly, Róbert Keményfi elaborates on how Central European nationalism has created mental maps which not only change pre-existing landscapes but which also create new territorial locations. Migration is discussed in the final part of the chapter as one of the phenomena involved in this process. Finally, Máté Tamáska's and Karolína Pauknerová and Jiří Woitsch's chapters deal with uses of landscape. The former is about (dis)continuities between the traditional manorial villages and the socialist large estate in the light of the Hungarian land reforms of 1945 and the latter examines the educational usage of natural landscape in Western Bohemia.

The chapters' broad spectrum of sources and case studies through which migration and landscape transformation is explored poses many new questions to the academic debate which is a strength of the volume. This variety, though, is also a weakness, at least to the reader who expects the volume to provide an interpretative narrative in which all the chapters find their place. An introductory chapter by the editors would have probably provided better guidance to this reader and made clearer the rationale of the volume.