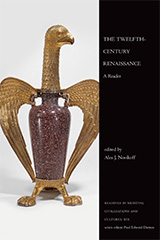 Richard Southern once compared the turn of the eleventh century to the Industrial Revolution: within a generation or two everything changed, from economy to piety. [1] These rapid changes continued throughout the twelfth century and into the thirteenth. The changes in intellectual life especially led modern scholars to claim that during the "long twelfth century" Western Europe experienced a "Renaissance". For a medievalist looking for an undergraduate class to teach beyond the survey, it makes sense to offer a seminar or even a lecture course, under whatever name, on this "long twelfth century". Until now, there has been no reader for this type of class. Alex J. Novikoff's The Twelfth-Century Renaissance will save many instructors weeks at the library designing their own reading packages.

There are relatively few surprises in the volume. Its goal appears to have been not to offer a new interpretation of the twelfth century, but to provide a reader that would be acceptable to all or most. The volume is divided into two parts ("themes" and "genres") and nine chapters. It includes eighty-six different sources, fifteen of which (17% of the total) have been translated by various scholars for the first time. The inclusion of these new translations, which are both excellent and apt, is one of the greatest assets of the volume. Most instructors will also appreciate the fact that most selections are at least two pages long.

One of the salient features of the "long twelfth century" was an increased perception of non-Christians, particularly of Jews and Muslims, and also of some groups among Christians, as the "enemy". Chapter 3, "Polemical Confrontations with Jews, Muslims, and Heretics", is dedicated to this development. This chapter is the most original of the volume. Although the selections treat some of the darkest facets of interfaith relations in the twelfth century, such as the accusation of ritual murder and expulsion of the Jews, the emphasis, as the title of the chapter makes clear, is on "polemics". The chapter even includes two Jewish polemics against Christianity. A possible problem with this approach is that it might mislead some students into thinking that Christians' use of violent actions - as opposed to violent words - against others was of marginal importance.

In the introduction to Chapter 3, Alex J. Novikoff acknowledges that the "menaces to Christian belief" were "perceived", rather than real, but otherwise he seems to take a cautious approach to R. I. Moore's theory that Christian Europe of the twelfth century was a "persecuting society". He writes, for example, that crusades and the Reconquista "lent urgency and necessity to combat the religion of Islam" (147). A newcomer to the field might imbue the combination of words "necessity", "combat" and "Islam" with unintended meaning.

In the Introduction to the reader, Novikoff admits that "urban and courtly or economic expansion" remain outside the scope of the volume. This decision is understandable - the volume already covers a lot of ground - but some instructors will probably feel the need to fill this gap. One might have wished for a section on "discovery of individual" (probably with a question mark), simply because this is a topic that many instructors might want to address.

The editor made an effort to include female authors, although there are just two outside Chapter 5, "Love and its Discontents": Hildegard of Bingen and the female physician Trota (for fairness sake, there is also a reference to Abbess Herrad of Hohenbourg in a caption to one of the illustrations). In a volume destined for wide readership, the introduction should have probably addressed the male clerical tradition and other reasons behind this scarcity of female voices.

Illustration are always an asset, but, in this case, the selection is not beyond reproach. Most of illustrations are either nineteenth-century lithographs or engravings or drawings of medieval originals (which the editor sometimes misleadingly calls "facsimiles"). Nineteenth-century perceptions of the Middle Ages is a fascinating topic, but students hardly need an extra filter between them and the medieval past. Even if they do not look as "crisp" as black-and-white drawings, modern photographs of medieval buildings or reproductions of medieval originals would have been far more useful. Many figures do not identify the source (Figure 9, for example, is "a miniature of the thirteenth century"). At least one figure misidentifies the source (Figure 10 refers to what looks like a modern drawing of a sculpture as "a twelfth-century sculpture"). Some figures give too much information that would necessitate independent research on the part of the reader (Figure 3, for example, mentions in passing that the right portal of the Portail Royal of Chartres Cathedral "has most often been connected with the so-called school of Chartres"). Finally, there is no list of figures.

To conclude, I would highly recommend this volume to anyone planning on teaching a course focusing on the twelfth century on advanced undergraduate or graduate level, although most instructors will probably want to supplement it. The reader will also be highly useful to scholars trying to figure out what the twelfth century was about, from whatever direction they approach this question.