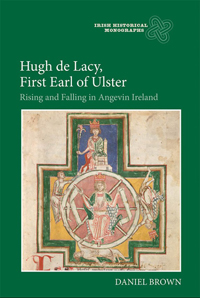 This is a careful and detailed study of a very colourful and romantic career, as signalled by the cover-picture of the medieval "Wheel of Fortune", which in the case of Earl Hugh de Lacy (d. 1242/3), revolved from low to high three times in the course of his adventurous life.

It is the only medieval volume in the series "Irish Historical Monographs", whose other topics range from the sixteenth to the twentieth century. Its inclusion is a measure of the centrality of its subject to Irish history, although the earl also played a significant role in the history of England and France.

Earl Hugh figures as an important secondary character in two major chansons de geste, the "Lay of William the Marshal" and the "Song of the Cathar Wars", and in numerous monastic chronicles from England, Ireland, Scotland and the Isle of Man, together with some sixteenth-century legendary material. However, the distinctive feature of this biography is that it began as an edition, with commentary, of thirty charters issued by the earl himself, with surviving notices of ten further lost charters, completed as a Ph.D. thesis under the supervision of Professor Marie-Thérèse Flanagan. The texts of these charters and the records of the ten lost charters form a very valuable appendix to the present work.

As the author points out, close attention to these contemporary records makes him sceptical of, on the one hand, the more romantic accounts in monastic chronicles, and on the other hand, fashionable trends in medieval historiography, schools of thought which would lay emphasis on "the post-colonial dilemma [...] the inability of those hybrid beings who live in the aftermath of conquest to find a secure category of selfhood to which to belong" (5); the supposed operation of aristocratic kin-groups as a political unit; or membership of the close circle attached to the king's court as an essential path to power and authority. Modern scholars had difficulty in categorising the identity and career of Earl Hugh de Lacy, not the earl himself.

A younger son of the first Anglo-Norman justiciar of Ireland, Hugh de Lacy the elder, lord of Meath (d. 1186), the younger Hugh acquired Ulster from his fellow-colonist Lord John de Courcy by capturing him in war in 1205 and forcing him to hand over his lands in return for his release. The present author convincingly argues that the title earl of Ulster was subsequently bestowed on de Lacy by King John as a temporary political stroke to counter the influence of Earl William Marshal, who was leading the opposition of English barons to serving in the king's campaign to recover Normandy. As soon as Marshal was back in favour, the king dropped Hugh's comital title in official correspondence, whereas the young earl laid great emphasis on it in his own charters, with near-regal enhancements. The distance of Ulster from the centre of power, and the fact that Earl Hugh owned no lands in England, gave him considerable independence of action. When he incurred suspicions of treason, it took a royal expedition to Ulster in 1210 to unseat him.

Now completely landless, Earl Hugh's neck-or-nothing military prowess, and following of hard-bitten knights from his original lands in Meath, made him a valuable recruit for the elder Simon de Montfort's Albigensian crusade, where he was rewarded with the lordship of Castelnaudary and Laurac. Daniel Brown's researches into mid-thirteenth century inquisitions of suspected Albigensians retrieved the interesting information that under Hugh de Lacy, Albigensian bonnes femmes not only continued to live in Castelnaudary, but could train up young girls in their beliefs, despite strict instructions to the contrary issued to the crusader lords.

Following the collapse of the crusader lordship, Earl Hugh was once again landless in 1221. After fruitless negotiations at the English court, he invaded Ulster 1223-4 and allied with the Irish kings there to eject the Hebridean Scots installed by the English king on his former lands. This time an all-Ireland expedition to Ulster led by the justiciar was unable to expel de Lacy, and a change in court politics favoured his restoration to the lands and title of earl in 1227, which he held until his death in 1242/3, rendering valuable assistance in the Anglo-Norman conquest of the province of Connacht in 1235-6.

Privileging the charter record as a source of information over less trustworthy accounts of monastic chroniclers, or literary sources, has given the author valuable insights and produced a number of original conclusions, most notably on the almost accidental circumstances under which the earldom was created, and King John's rapid ignoring of the title thereafter. On a few occasions, however, the author outlines a tentative hypothesis on one page, and treats it as a proven fact elsewhere. On p. 45 he remarks how extremely probable it is that King John, who belted Hugh de Lacy as earl in 1205 on Whitsunday in Winchester Cathedral, did so as part of the customary crown-wearing ceremony, but on p. 206 he refers to this as fact. On pp. 101-4 he gives reasons for dating Hugh de Lacy's charter endowing the chapter of St Andrew's cathedral in Scotland to 1207, and suggests three possible connections between Earl Hugh and Scotland which might explain the grant - a marriage link in 1229 to Alan of Galloway, a distant familial connection with the stewards of Scotland, or an association with William Malveisin, bishop of St Andrews. However on p. 108 and again on p. 166 he uses the same charter to claim a friendship and political alliance between Earl Hugh and William the Lion, king of Scotland.

The treatment of Earl Hugh's relations with the Irish kings in Ulster makes insufficient distinction between those living inside the lands of the earldom under the leadership of Mac Duinnsléibe, "king of the Irish of Ulster", and satellite kingdoms west of the river Bann, led by de Lacy's ally, the king of Cenél Eógain, Áed Méith Ó Néill (d. 1230). Ó Néill's rival and successor, Domnall Mac Lochlainn (d. 1241) was enabled to expel Earl Hugh from Ulster temporarily in 1238 because he allied with a rebellion of the Irish within the earldom, and it was probably as part of the invading force of this Mac Lochlainn that the king of south Armagh, Gilla Pátraic Ó hAnnluain, was enabled to raid as far north as county Antrim, an exploit mentioned several times (pp. 197, 199) but not in connection with the war of 1238. On pp. 60, 61 Brown wrongly locates Ciannachta (county Derry) in Tír Conaill.

These are minor quibbles. Irish historians must be especially indebted to Daniel Brown for his unravelling of a forest of aristocratic tenancies, allegiances and familial connections, and an immensely detailed chronology of changes in court factions that underlie the earl's adventurous career. In his own words (206) he has provided "an antidote to the often parochial historiography on medieval Ireland, showing that the political context for key developments in the colony could be found far away from Irish shores".