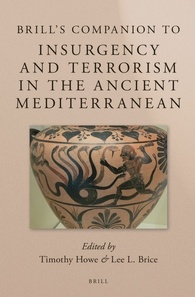 The editors of this volume, Timothy Howe (St. Olaf College) and Lee L. Brice (Western Illinois University), have produced an engaging, wide-ranging, and well-organized introduction to the topic. The book consists of ten chapters from leading academics in their fields, grouped together into examinations of terrorism and insurgency in the ancient Near East, Classical Greece (and the Hellenistic world), and the Roman world. In addition, an introduction by Lee Brice and an "epilogue" by Jonathan Roth are particularly valuable for framing the chapters, problematizing the results, and suggesting avenues for future research.

The book acknowledges that "the types of activities included in our terms insurgency and terrorism have been around for centuries" (3). But the editors and Jonathan Roth also make clear that the study of terrorism and insurgency in the ancient world is a sticky business, fraught with conceptual and terminological problems. Most analyses of terrorism are linked to decidedly modern phenomena and rely on clear distinctions between state and society and between public and private violence. And those who use terrorism typically depend on gunpowder and explosives to perpetrate their violence and on mass media to publicize their misdeeds. For all these reasons, it can be difficult to identify terrorism in the pre-modern world without engaging in egregious anachronisms.

The volume's editors and contributors address these issues head on, and herein lies much of the book's value. Timothy Howe and Lee Brice supply standard definitions of terrorism and insurgency to serve as starting points but encourage the authors to explore their appropriateness and applicability for the ancient world. In this way, the book serves as a valuable two-way street: on the one hand it is meant to provide "broader contexts of these historically relevant phenomena" to scholars, policy-makers, and practitioners operating today (3) and, on the other, to illuminate underappreciated aspects of the ancient West via the application of "tools and methods from the fields of insurgency and terrorism studies" (4). This approach produces a host of valuable insights, both in terms of methodology and content.

Sources from the ancient world that have survived overwhelmingly reflect not only the views of the elites but efforts to glorify them. Therefore, this volume largely dwells on state terrorism or, as it is usually called, state terror. An excellent example is Ellen G. Millender's chapter on the Greek city-state of Sparta in which she applies contemporary methodologies for explicating state terror to shed new light on the means by which the Spartan elite controlled their helot population. Just as importantly, she reveals the consequences for the Spartan elite themselves, for whom terror and intimidation became a key element of identity formation.

The organizers of this book correctly note that we must distinguish between the sort of violence and intimidation that was a routine aspect of a state's behavior (such as in Sparta), and counterinsurgency, which was waged to suppress specific incidences of rebellious behavior. But, as noted above, ancient sources are often thin when it comes to explaining the motivation of rebels. How then do we distinguish between criminal and political behavior or even a foreign-sponsored insurgency - and, therefore, how do we differentiate between the violence used to suppress crime and a domestic rebellion? Sarah C. Melville's chapter on violence in the Assyrian Empire ingeniously uses the author's knowledge of modern counterinsurgency to seek out similar behaviors in the Assyrian elite. She finds that Sargon II and other Assyrian rulers sometimes tempered their usual means of fighting wars ("destroy, devastate, and burn with fire" [78]) with more subtle tactics and strategies, including an emphasis on intelligence-gathering, the provision of security to civilians, and an awareness of the political implications of violent means. Thus we can guess that some of what is recorded as essentially criminal activity might well at the time have had a much more political character.

The one example of ancient terrorism and insurgency with which the non-specialist is most likely familiar is the Jewish Revolt of 66-70 CE. Frank Russell addresses the topic, but in somewhat elliptical fashion. His contribution only briefly mentions the Sicarii, their terrorist violence, and the last stand at Masada, instead emphasizing the Roman campaign of counterinsurgency against what have come to be known as the Zealots. In one of the volume's clearer back-and-forths between modern counterinsurgency theory and ancient counterinsurgency practice, Russell asks why the Romans engaged in a scorched-earth campaign against the rebels instead of adopting a "hearts-and-minds" approach, especially since the Romans had proven adept at inducing cooperation with the Jewish elite of the area for decades. Russell argues that Roman political chaos - 69 was the so-called Year of Four Emperors - required that the Jewish revolt be contained and resolved quickly, hence the Roman pursuit of a rapid and total victory. Military force carried the day and this success demanded the complete annihilation of the enemy through military operations and state terror. Thus Roman counterinsurgency in the first century CE reminds us today that politics always provides the context for military decisions, helps explain why well-regarded and oft-practiced strategies are sometimes abandoned, and highlights the complex interplay of insurgency, counterinsurgency, and state terror(ism).

In other instances, the authors show how the application of the modern language of insurgency and terror/ism can be misleading. In his chapter on insurgency and terror in Mesopotamia, Seth Richardson explains that while early Mesopotamian sources did not invest warfare or violence with much "ideological significance" (49), "terror" was central to Mesopotamian "political ideology" (51), particularly in terms of constructing the image, power, and reach of the king. But this was typically not the sort of grisly and symbolic state terror (except in the case of the neo-Assyrians) that has often been ascribed to ancient Mesopotamians and, by extension, other early civilizations. In this context, the word "terror" ("puluhtu" in Akkadian) might better be rendered as "awe-inspiring". Thus Mesopotamian "terror" was more akin to modern propaganda and not much at all like modern terrorism.

In conclusion, Brill's Companion to Insurgency and Terrorism in the Ancient Mediterranean is valuable to both historians of the ancient world and of modern insurgency and terrorism. There are a few too many typographical errors (particularly dropped or repeated words), but the volume does include several helpful maps. Each chapter has separate footnotes and a bibliography, and the entire volume is well indexed.