Zsuzsanna Várhelyi: The Religion of Senators in the Roman Empire. Power and the Beyond, Cambridge: Cambridge University Press 2010 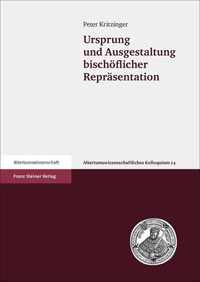 As Christianity emerged and developed into the state religion of the Roman Empire by the end of the fourth century, its bishops became not only prominent figures within their own Christian communities, but also in Roman society at large. Scholarship on early Christianity and its leadership has led to a broad variety of studies in different disciplines such as theology, history, art history or archaeology. By focusing on bishops' representation Peter Kritzinger's book Ursprung und Ausgestaltung bischöflicher Repräsentation offers an analysis of a perspective that has not been dealt with extensively. Geographically, Kritzinger's study examines the western part of the Roman Empire, with a chronological focus on the period from the second century until the end of the fifth century.

The book consists of nine chapters, including introduction and conclusion. Although Kritzinger's prime focus on the ancient sources is a clear and methodological choice, his concentration on 'representation' calls for some theoretical foundation which he provides briefly in the introduction. Kritzinger distinguishes between the theoretical concepts 'Selbstdarstellung' and 'Repräsentation'. He defines 'Selbstdarstellung' as the individual presentation of bishops that emerged in their particular and personal situation, whereas he employs 'Repräsentation' as the way in which a bishop as a 'pars pro toto' represented various groups in society. Hereby Kritzinger offers a basic theoretical outline for his application of 'representation'. His ultimate analysis, however, might have profited more from several other modern studies that apply the theoretical implications of 'representation' even more thorough. [1] This would have embedded Kritzinger's study more solidly into a field of interest of scholars more generally interested in representation in the ancient world and not only in early Christianity.

The second chapter starts with a general overview of the origins and developments of the early Christian communities and the offices within the church. Simultaneously, bishops started to develop internally into the men who performed the most important religious rituals for their community as well as externally into the most important representatives of their Christian communities. Kritzinger has deliberately chosen to discuss this early history through the ancient sources and not through scholarly debates.

The third chapter discusses several relationships of bishops with other groups in society that each had their own sensitivities for bishops to reckon with: clergy, the people, the elite and the emperor. Although the reception of bishops' representation is not always voiced in the ancient sources, some glimpses of ancient criticism show that it was a complex issue. Furthermore, Kritzinger considers the tension - perhaps even to be called a limitation - that bishops felt in the development of their representation: they were bound both by the ideals of the church as well as those of the Roman state. In other words, they were restrained in publicly presenting themselves as grand and powerful figures.

Chapters four, five and six can be grouped together as they all focus on 'material' evidence for the physical representation of bishops, i.e. ornamental ecclesiastical hangings or vestments, bishops' thrones and architecture. In these chapters the separation in internal and external representation possibilities emerges as well. A series of baptismal images (chapter 4) found in for instance catacombs illustrates how clothing started to be used as a visual marker of clergy and in particular the bishop. The bishop's throne (chapter 5), set up higher in the area close to the altar, offered him a high visibility during the services for the entire congregation. Thereby it proved to be an excellent instrument for the bishop's representation as it positioned him - quite literally - above his community. As architecture (chapter 6) is concerned, Kritzinger points to two issues that rather hinder an all-encompassing and focused analysis within one chapter. On the one hand, the material is quite extensive and spread over the entire empire, while on the other hand it is difficult to discern clear general patterns of developments for the representational use of architecture by bishops. The largest part of the chapter is taken up by an examination of the development of church buildings, while bishops' residences, Christian coemeteria, and baptisteria are considered in the second half of the chapter. In regards to churches, although Constantine the Great encouraged the building of churches, he was not directive in how those churches should look like both the interior and exterior. He left those decisions to bishops. Especially in the first century of church building we should not overemphasize the churches as tool for bishops' representation. Church buildings were spaces that belonged to the community and were certainly not seen by the Christian community as a tool for the personal fulfilment of their bishop's ambition. Notably, many churches were big, but not necessarily impressive buildings from the outside. The interiors, however, were used much more to show off the splendor and wealth of a church. One might wonder to whom this was a message: to the own Christian community, to other Christian communities, or to non-Christians as well (unfortunately, so little evidence is left about those who would enter churches).

Chapter seven deals with the visibility of Christian communities in public space. As most of their rituals were performed inside, for a long time their practices remained invisible for non-Christians. Based on a case study of Ambrose and the emergence of processions for the so-called translation of relics of saints, Kritzinger illustrates how Christianity not only became more visible but also claimed part of the public space.

Whereas most of the book focuses on physical representation, chapter eight offers an analysis of letters and inscriptions as types of non-physical representation by which bishops were not physically present. Kritzinger's examination of letters of several famous bishops brings out both individual and more general features. The value of letters for insights into representation is two-fold. The contents of the letters offer a glimpse into bishops' personal and church ideals, whereas a letter itself can be seen as a tool of representation as well. The medium of inscriptions that were set up by bishops or in which bishops are mentioned is more difficult to evaluate, as we lack any modern systematic analysis of them. Bishops appear in a broad variety of inscriptions: building, honorary, grave, foundation inscriptions. Although the elite of the Roman world had been using inscriptions for centuries as a tool of representation, Kritzinger's analysis shows that we cannot discern a clear Christian epigraphic habit.

Ultimately, as Kritzinger himself concludes as well, it is difficult, if not impossible, to separate bishops' Selbstdarstellung and Repräsentation as they were so intertwined. Of course, it would be our modern separation of two concepts that we want to employ to help us understand ancient mechanisms. Kritzinger's thorough analysis of the ancient sources shows a great flexibility in the development of bishops' representation in those early centuries of Christianity. In part this can be explained as the early stages of a new phenomenon, in part by the attempt to fit into the traditional schemes of elite representation while staying in accordance with the ideals of the Christian church. Many more questions could be asked on this topic. For instance, a more systematic comparison between elite representation and that of bishops' might be a valuable next step. Ultimately, Kritzinger shows that the topic of bishops' representation deserves further scholarly attention.