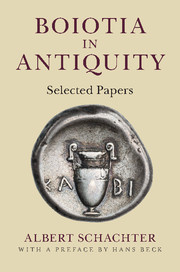 Albert Schachter is perhaps most widely known for his encyclopedic, four-volume work, Cults of Boiotia (1981-1994). To scholars specializing in the study of the central Greek region of Boiotia, however, he is well known for an array of studies, often published without fanfare in out of the way places, that exhibit the same thoroughness and good judgment on display in Cults of Boiotia on a range of topics that widened considerably from religion, particularly after around 2004. This volume collects many of Schachter's papers published up to 2010, with the addition of two previously unpublished papers. They are organized into sections on Boiotian history, institutions, literature, and cult; within each section, the papers are arranged in the rough chronological order of the topics under discussion, rather than by publication date. While in a few places references to more recent literature are inserted, this has in no way been done systematically and, given a spate of major publications in Boiotian history, epigraphy, and religion in recent years, readers are left to fill the lacunae on their own.

The two previously unpublished papers are both attempts to write something like a narrative history of Boiotia in two periods for which that exercise is particularly difficult: the first from the late sixth century to 458 (chapter 4) and the second from 362 to 335, with a focus on Thebes (chapter 7). In them Schachter lays bare his views on a series of controversial issues that he could more or less skirt in papers on Boiotian cults; there is, as a result, much that is new here. Schachter tells a story of formal Boiotian unity from the last quarter of the sixth century, more or less explicitly rejecting arguments by Mogens Herman Hansen and Stephanie Larson that there were no formal regional political insitutions - no Boiotian koinon - before the expulsion of the Athenians in 446. And though he concedes that in the sixth century "the union was a fairly loose one" (53), he infers from a few scattered references and maddeningly uninformative inscriptions the existence of formal institutions at every opportunity. It seems to me a missed opportunity to consider how, over time, "loose unions" governed by informal institutions might have developed into tighter ones governed by more formal ones. This is, after all, a crucial part of the process of state formation, which is what is actually at issue here.

Chapter 7 seeks to account for the dramatic decline in Theban prestige and loyalty within Boiotia from Mantineia in 362 to the destruction of Thebes in 335, culminating in the participation of other Boiotian cities in the sack of the regional capital. Two major, innovative arguments are made in this chapter. The first is that one of the Thebans' distinctive strategies in the 370's and 360's was a concentration of local and regional power in the hands of their own military (and, insofar as the two were at all distinct, political) elites. The second is that Theban hegemony was significantly undermined by fiscal shortages. Into this dossier Schachter rightly fits Persian funding for the Boiotian fleet of the 360's, the repeated hiring out of Boiotian soldiers to the Persian king, the reliance on allied contributions to the Third Sacred War, and the possibility that the Theban mint closed for a time in the latter half of the 350's. His story is a vast improvement on the old trope that Theban hegemony died at Mantineia along with Epaminondas, quietly encouraging a more robust integration of economic with political and military history.

It will come as no surprise that the oligarchic polis of Thebes empowered its local elites, but the dynamic has never been stressed in quite this way before. What is more, Schachter's work portrays not a general sense of elite influence but rather the specific roles of local elites and the detailed mechanisms by which they exerted their influence. In a study of elite political conflicts in Classical Thebes (chapter 5), Schachter reveals rich men in both oligarchic and democratic factions, and suggests that what animated their behavior was not so much particular political commitments as it was access to xenia relations that might vault them to new heights of influence. His fascinating paper on Boiotian military elites from the sixth century to the Hellenistic period (chapter 12) makes the case for reliance throughout this period on an elite military corps, originally an adaptation of an aristocratic formation to the era of hoplite warfare, which developed into a specially trained corps that was consistently deployed in the front lines of battle (as at Delion and Leuktra) and for special assignments in particularly difficult circumstances (Thermopylai in 480, Corinth in 369). This corps may have been keen to advertise its special status and its corporate unity from an early period, but was transformed from a pan-Boiotian cultural practice into a strictly Theban military structure as the Theban stranglehold on Boiotian power tightened in the fourth century, before easing back again into a regional institution in the Hellenistic period when they engaged in agonistic festivals and commemorated their victories. A study of "three generations of magistrates from Thespiai" (chapter 13) disambiguates two individuals and redates one inscription, but misses the opportunity to remark upon the significance of the resulting fact that the office of polemarch remained in the same family for three generations in the second century BCE. Elites also appear as catalysts of cultic innovations in Boiotia. Whoever introduced the cult of the Kabiroi to Boiotia in the Archaic period, elites participated eagerly and appear to have controlled the priesthoods (chapter 20). And it was elites rather than mercenaries who introduced Egyptian cults to the region and facilitated the assimilation of Isis and Serapis to the regional gods Demeter Achaia and Zeus Karaios, respectively (chapter 19).

The collected papers on religion underscore Schachter's talent for seeing change over time and his interest in charting it (chapters 20-22). This stands in tension with his long-standing view (chapters 17, 22) that there are distinctive regional "cult types" that can be recognized over long periods of time. It is a potentially productive tension, but one with which Schachter never explicitly engages. Nor, in fact, does he ever take up directly the so-called polis religion debate, the question of the extent to which Greek religious practice was bound up with the life and institutions of the polis, which raged throughout the 1990's while he was writing many of these papers. The "Boiotian perspective" with which Schachter "tr[ies] to look at the ancient Greek world" (xi) might have afforded an interesting challenge, or at least a modulation, of that model in which regional patterns and relationships might have been deemed equally efficacious, but he offers readers no direct meditation on such matters.

Every one of the papers in this volume is thorough, cautious, and reliable; most include detailed and informative appendices. Students of Boiotia, and of Greek religion, already know what a rich resource Schachter's papers are, and experts in other areas, particularly those that tend to command the most attention, will find stimulating new perspectives here.