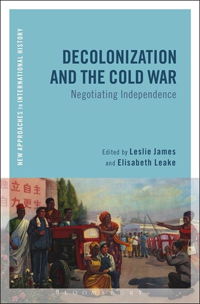 Odd Arne Westad's in his article on "three paradigms" of future Cold War studies [1] holds that one of the major research topics of international historiography would become Third World history and its specific correlation with the global competition between the two ideological blocs. Accordingly, this volume attempts to shed light on particular connections and relationships between these two major historical phenomena, attempting to locate where those were intertwined or mostly parallel historical currents. By stressing the term 'negotiating independence', notwithstanding all the obvious cases of 'violent independence', it seeks to emphasise that whatever course decolonization took, finally there always was a negotiated solution between non-indigenous - colonial or Cold War ones - and indigenous actors seeking alternative visions for their respective societies.

The volume discusses the process of decolonization from three different perspectives - local, international and metropolitan. Regarding the first, authors tend to put much emphasis on the influence of human agency: individuals and certain social groups, their perceptions and actions with a deep impact on political, social and economic strategies of post-colonial countries. Thereby, the volume avoids focusing too narrowly on elites and their specific role in the process of decolonization and thereafter, contributing to the overall decentralization of Cold War and decolonization studies. It proves the point that these processes should be viewed from both top and bottom, thereby illuminating the impact of both elites and ordinary citizens on the ideological, racial, political, economic, and cultural discourse over the future of post-colonial nations.

The volume contains of five main chapters. Both editors and authors precisely link the individual cases with overarching topics, constituting the essence of the decolonization process and Cold War participation: newly shaped national identity as rather fluid but necessary precondition for building and organizing statehood; sovereignty as an outright expression and guarantee of newly acquired independence both from former colonial rulers as well as from the superpowers; socio-economic modernization as a difficult and long process of injecting new contents and dynamics into statehood and transforming it into a sustainable model of existence; and diplomacy, security and intelligence as means of action and preservation of post-colonial nations in the international arena. Many of the contributors demonstrate how the specific correlation between notions of decolonization and Cold War was instrumental in shaping the destiny and future of the Third World beyond just great power politics.

Even though identity, sovereignty and security issues were and are paramount for all developing nations, as some chapters elucidate, modernization and sustainable development, nonetheless, have remained at the very top of their agenda as credible means to guarantee their future existence. Particularly the chapters dealing with socio-economic modernisation, therefore, offer new perspectives on the specific relationship between the processes of decolonisation, development and the Cold War. They put them into a much wider perspective of nation building and modernity, extending their relevance even into the post-Cold War era. Contributions by Benjamin Siegel, Simon Toner, Patrick Neveling, and Christopher Miller prove that economic assistance and cooperation, which the superpowers offered to developing countries, were a crucial part of the global competition between two rivalling visions and two models of development. To make things even more complicated, there were also two rivalling Third World economic models, namely import-substitution policy versus an export-oriented policy.

The modernisation discourse was not a one-way street in which post-colonial elites were just recipients of foreign assistance. On the contrary, they did not make demonstrations of loyalty to either of the superpowers their priority. Instead, they focused on propelling their societies into modernity and preserving them from the vicissitudes of superpower rivalry. In essence - other than sometimes claimed - economic and political ties between post-colonial nations, former rulers or the superpowers must not be considered proof of lack of true independence. Other case studies on the performance of non-aligned countries indicate that this is a complex field of history with many shades of grey.

Patrick Neveling and Christopher Miller emphasize the importance of the modernization issue by discussing the historical relevance of Special Economic Zones (SEZ), a development concept that remained rather popular even after the Cold War. It has come under criticism in various developing countries, often associated with the sensitive issue of foreign concessions from colonial times. As both authors elaborate, SEZ, nevertheless, became a symbol for economic development without outright restricting sovereignty, since the legal system stipulating its existence was regulated by the laws of the post-colonial country. Essentially, newly liberated nations willingly permitted SEZs for not being imposed on them like in colonial times. As for economic growth and benefit, indigenous actors seemed to remain mostly in direct control, ensuring that unlike in the colonial period their countries were not drained of their natural resources. In fact, most of the direct investments into SEZs eventually contributed to economic growth, thus strengthening economic independence of post-colonial nations. Nevertheless, one could still argue that technological know-how remained firmly in the hands of industrialized countries, thus displaying their economic superiority. Even more interesting is an academic debate Neveling initiates on the manner how international organizations subverted efforts by the Non-Aligned Movement to create a New International Economic Order. The former used the promotion of SEZs to establish a new international division of labour promoted by this specific capitalist development model.

In most parts, this volume provides a good starting point for any future analysis or rethinking of certain outstanding issues. Furthermore, it also prone to initiate further debates on the role of the post-colonial world before, during and after the Cold War, as it is the case with modernisation issues. As a minor downside, China and India have been overrepresented in this volume, compared with Africa, the Middle East or Latin America. These two gigantic nations, having experienced rather non-typical decolonization processes, represent interesting case studies for the Cold War power politics agenda, but not for many specific social, economic and political nuances of the post-colonial discourse characteristic for smaller and less dominant developing nations. Nevertheless, this volume serves as refreshing reminder that various Third World topics still need to be seriously addressed.