Alice Taylor: The Shape of the State in Medieval Scotland 1124-1290 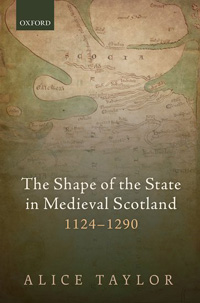 Not just about Medieval Scotland, this book is a very important contribution to the history of state formation in twelfth and thirteenth century Europe. It should be essential comparative reading for those engaged in work in fields as diverse as the balance and dynamics of central and local administration; record keeping and administrative government; the nature of government offices; the relationship between law codes and legal practice; royal and aristocratic relations; and the territorialisation of aristocratic titles and power. At the same time, as the first study of its kind, it transforms our understanding of how medieval Scottish royal power, government and law developed in this period. It will become a staple foundation of the historiography of medieval Scotland for many years to come.

Historiographically, it also has a fascinating comparative and not just Scottish contribution to make. It demonstrates how past conceptions of the Scottish state have often been built in hindsight; by comparison (often negative) with English developments and models; and on the basis of problematic early modern and modern editions and commentaries on key sources. It is representative too of a vibrant and innovative scholarly community revolutionising how historians should approach this period of Scottish history, revisiting nineteenth century editions of primary sources, interrogating those sources in new ways, and making full use of electronic tools to create new analytical resources. Explicitly conceptualising Scottish history within a European historiographical framework rather than just an English or a 'Celtic' one is also relatively new. Common to this new Scottish history is a basic methodology, at once very simple and very difficult: examining offices and structures from their early appearances in the sources forwards rather than reconstructing backwards from later material which is more comprehensive and might even claim the past for itself. Where forms and structures of government share names and, ostensibly other elements, with those elsewhere, what does the evidence actually provide in terms of their function and status?

An exceptional scholar is at work here, equally at home in legal terminology and aristocratic titles, Carolingian historiography and the English baronial reform movement of the 1250s, and this study is based in a framework established by an enormous amount of reading (the bibliography of secondary literature is twenty-nine pages long), and in an immersion in and mastery of the primary source material. This scholarship, nevertheless, is worn exceptionally lightly. While much earlier work is challenged here, indeed often overturned, it is only ever treated with the greatest respect and the author's acknowledgement that her own work would be impossible without it.

Much of the material here is necessarily very detailed and very particular: there are seven chapters of close forensic analysis of the processes and structures of governance and society, often concentrating on particular forms of document or particular offices and titles. An appendix lays out the relationships between different legal sources. For historians of Scotland this is tremendously exciting new thinking, but extended discussion of the minutiae of Scottish governance is not what most readers of this journal will need to read; the Scottish Historical Review would be the place for a close analysis of that material. So, how best to navigate the book for its broader significance? Best to begin with the first four pages of the introduction and then the conclusion. This last is what a conclusion should be: it pulls together the very specific, focussed and complex individual chapters and brings them together to create, first, a brief, highly convincing and innovative narrative of the development of the Scottish state in this period and, second, demonstrates how useful this can be for comparative analysis. Each individual chapter also ends with a succinct and very coherent conclusion which focusses on the broader significance of its close analysis, and which often contain thought-provoking insights and phrasing.

For instance, in a discussion of the differences between legal practice as visible in charter material and the processes outlined in 'written' law (law codes, statue law etc.), Taylor points out that there are two ways in which offences might be treated. The type of offence might determine the forum, or the persons involved. Two ways of thinking might co-exist "abstracted, non jurisdictional, prescriptive law on the one hand, and jurisdictional power over land and men on the other." (162) "'Feud' and 'crime' were thus not separate legal orders, they were, instead, inseparable parts of the same whole." (139) Discussion of enrolment and recordkeeping leads to important questions: "How far was there a state apparatus separate from civil society if the leading members of civil society were also the leading members of government?"; " How far was routine record keeping really a part of government (author's italics) if the king's archives resembled a patrimonial repository as much as a state institution?" (436)

Taylor's broader contribution is to present a seismic shift in how the nature and development of the Scottish state is understood, from a long term dynamic of growing central royal government reducing aristocratic private power, with central royal institutions and processes, legal and financial, increasing their influence in the localities at local societies' expense to one in which royal and aristocratic power continued to co-exist and continued to be co-dependent. There was no reorganisation of existing power relationships, instead they were manifested in different ways. Common law did not take cases out of aristocratic courts; military service was still levied according to lordship; central government did not take on an institutional form that was spatially and institutionally distinguishable from the local. In all this Scotland can be contrasted with England despite the sharing of many names of offices and ostensibly similar forms of document and governance, but rather than this entailing a 'failure' or late and limited development of a Scottish 'state', instead Scotland can be considered as a fundamentally different type of 'state' from twelfth-century and thirteenth century England (despite their acknowledged very close ties), one which fits the most recent work on continental 'states' of the early and central middle ages. Alice Taylor is to be congratulated on an outstanding work.