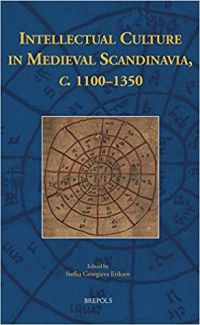 This volume collects a number of articles of very high quality. They explore intellectual aspects of Old Norse literature and culture in a way that shows the trend of the last two decades - of understanding Old Norse literature through its interaction with, and translations from, Latin - has now reached a certain maturity. Almost all contributions are formed by an active engagement with translation processes: mental, conceptual and textual - at its most sophisticated and exciting in the chapters by Bandlien, Malm, and Males. The old-fashioned sharp divide between secular and ecclesiastical is now also finally being overcome. Most contributions cross the two spheres with ease and thus display how entangled they were in the Middle Ages. We are happily free of the idea of pure secular vernacular literature in this book. The Old Norse articles are supplemented by two excellent art historical pieces by Hauglid and Aavitsland, two magisterial orientations on mainstream Latin intellectual culture in the XIIth and XIIIth centuries by leading scholars in the field, Wei and Copeland, and finally a survey of the fragmented, but important evidence of local Latin schooling by Ommundsen.

When Le Goff published his famous book on medieval intellectuals 60 years ago, his title acted as a powerful tool of upgrading and understanding university culture, especially of the blossoming XIIIth century. His idea of the 'intellectual' was of men being paid solely to think about the highest theological and philosophical issues of the day. In the programmatic (and officially condemned) words of the most famous Scandinavian medieval philosopher (not mentioned by Le Goff nor in the book under review), Bo of Denmark (Boethius de Dacia, c. 1240-80): "Quod non sit excellentior status quam vacare philosophiae" - there is nothing better for man than to dedicate himself to philosophy. This can be taken as the narrowest definition of an intellectual. However, Eriksen's introduction makes clear that the volume operates within a much broader definition of the 'intellectual' by relating it to all kinds of cognitive and creative processes of adapting and (re)forming, thus including storytelling, poetry, arts and crafts (7, 9). This broader definition works fine for the material treated in the book, but it can hardly be concluded (26) that "we show that intellectuals could have multiple social roles and functions. They could be literary and art patrons, [...] poets, writers, scribes, and certainly artisans" - because this simply follows from the initial definition.

The literary geography of the volume is not 'Scandinavia' as in the title, but present-day Norway and Iceland ('the Old Norse World'). To present this as Scandinavia is not just a way of attracting a broader readership by being a bit liberal with the title, but is embedded in the vision of the volume, as can be seen in the introduction, for example on p. 10-19, when, under the subheading "Medieval Scandinavia, c. 1100-1350", only Norway and Iceland are described. Present-day Denmark and Sweden (and Finland) are actually included in the book's concept of Scandinavia, but in such a way that these areas can easily be discarded again (2): "Our focus will be primarily on Norway and Iceland, but where relevant, attention will also be paid to textual and material culture produced in Denmark and Sweden" (referring to one and a half article). Relevant for what and for whom? For Old Norse scholars it would seem. Are not the 15 thick modern volumes of philosophy written by Danish intellectuals (in the strictest sense) during these centuries relevant? Or the Danish Latin historiography with Saxo Grammaticus as a high point (mentioned briefly on p. 290), or the legal and philosophical learning brought home by leading ecclesiastical politicians such as Anders Sunesen or Martin of Denmark? The lack of any reference to this massive and truly Scandinavian intellectual culture rouses the suspicion that the editor does not even know what she has discarded.

It would have been better to state that the whole agenda of the book has nothing to do with Scandinavia and everything to do with analysing a certain textual corpus in Old Norse. In fact a treatment of Bo of Denmark or other philosophers, theologians or historians would have created a much clearer link to the brilliant articles by Wei and Copeland. The argument for excluding Danish and Swedish textual production in practice can also not have been made on the basis that the focus had to be on Latin / vernacular exchange and dynamics, because there are highly relevant texts from the period also in Danish (e.g. scientific translations by Henrik Harpestreng), laws in both Swedish and Danish, and even Old Norse literature connected to the Danish court (Knytlingesaga). In this way the book is a reminder that in spite of modern non-nationalizing approaches to literature and history, national research organization still creates blind spots detrimental to our understanding of pre-national conditions.

Even on its own terms (relevant material from Scandinavia = written in Old Norse), the literary geography of the volume is problematic. This is clear from two concepts which are key to the volume, namely 'influence' and 'European'. These are especially important in the introduction by Eriksen and in the otherwise very good survey by Hardarson (ch. 2), but also present in other articles (e.g. 122, 147). The concept of 'influence' (in arts, literature, etc) has been crucial for nationalizing narratives since the XIXth century. While it was impossible to deny transnational traits in styles, contents, forms etc, 'influence' was invented to regiment and restrict the foreign within the national, and it is a necessary concept to hold up the national silo-thinking. Each nation possesses a literature (etc.), and common traits can be reduced to 'influence' flowing over from one well-delimited silo to another. By keeping this metaphor we are still barred from seeing medieval literature in terms of non-national elite networks in which contents were often more important than language.

The influence goes from 'Europe' towards Iceland and Norway and there is talk of 'European' traditions / literature etc. vs. 'Nordic' (again meaning Iceland and Norway). One suspects that by 'European' it is not meant Russian, Byzantine, Sicilian, Irish, Iberian, Napolitan, Bohemian etc., but rather French, English, German, and perhaps northern Italian. In this day and age one would expect a better explanation, and frankly this is a nationalizing lazy habit also cultivated in Ireland, Britain, Iberia, Greece and many other places, to refer insensitively to an indistinguishable 'other' by such a label. In reality Iceland and Norway very much became part of a common European culture in the High Middle Ages, as Hardarson also happens to state (42): "[the archbishopric of Nidaros, 1152] integrates Norway, together with the Atlantic provinces, firmly into European intellectual culture". The long held dichotomy between the Old Norse world (and literature) and an ill-defined 'Europe' evaporates, and so does the 'influence' from one to the other. Ironically, a better comparison with a 'Europe' of distinctive and distinguishable parts (and not just lumped together) could have provided an argument against Icelandic exceptionalism. Could this description by Hardarson (68) of Icelandic authors not be equally valid for the intellectual and literary program in Castilian organized by Alfonso the Wise (1252-84): "Their work was based to a large extent on European common culture. However, their intellectual productions were not intended as contributions to this common culture, but as something of their own, made for their own purposes"? The book can be highly recommended for its actual contents, but its framework stubbornly reproduces national and disciplinary divides that we need to work harder to overcome.