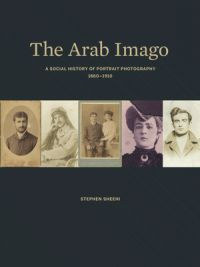 While commonly studied in the fields of history of art or science, photographic artifacts have recently piqued the interest of scholars from a variety of academic disciplines. The Arab Imago is one such example. By considering a range of portrait photographs between 1860-1910, this book joins an increasingly vibrant stratum of photographic histories from various corners of the globe. A complex and sprawling subject matter that spans a vast geographic expanse, the history of photography from the Ottoman, Arab, and Mediterranean worlds is fertile ground for study.

Stephen Sheehi's project seeks to remap the course of Arab photographic history by concentrating on local image production in provincial Levantine cities. In this way, it raises important questions about photographic terminology and categorization. How are Arab and Ottoman identities entangled during this period of social reform in the nineteenth century? Can there be a distinct Arab, Ottoman Arab or Ottoman history of photography? The book correctly suggests that Ottoman and Arab modernity is different from European modernity, making photographs (and their histories) from these regions unique. Yet, the challenge remains - not to reinforce cultural differences, which invariably preserve an East/West binary, but rather to chart an inclusive and networked history of visual representation. Seen through the circulation, translation and appropriation of photographic objects, this more nuanced approach emphasizes how forms and technologies were shared across cultural borders. Like the 1869 profile portrait of Sultan Abdülaziz made in Istanbul by Abdullah Frères as the prototype for a medal engraved in London by Joseph Shepard and Alfred Benjamin Wyon, photographs produced in Istanbul, Jerusalem, Beirut, and Cairo were not only shaped by Ottoman or Arab modernity, but also by ideas of British, French, German, Russian, Persian, and American modernity. [1]

Sheehi situates his project against the backdrop of Ottoman and Arab social reform. He links portraits to the ideologies of Osmanlilik and al-Nadhdah. In The Arab Imago, these operate as more than political doctrines, instead as an overarching ethos that connects different sultans to different modes of modernization and permeates all eight chapters of the book. The first section of the book tackles what the author calls "Histories and Practice", while second discusses "Case Studies and Theory". Collectively, these parts aim to identify and investigate unstudied photographic ateliers such as those of Georges and Louis Saboungi or the Kova Brothers. Arranged in this way, The Arab Imago operates around two poles of inquiry: the applied history of local Arab photographic firms and the theorization of photographic practice explored through a set of hand-selected case studies.

Individual chapters contain interesting although not entirely novel information about photographs from Ottoman domains. Exactly which lands comprise the study remains unclear. The insertion of a map or more specific geographic parameters would clarify and support the book's argument. By weaving together contemporary photographic and written accounts, Sheehi reads photographic portraits through a post-colonial, poststructuralist and psychological prism, considering notions of formalism, surface value, and the optical unconscious. In some instances, this can prove useful as it does with the example of Midhat Paşa, the influential Ottoman statesmen active during the Tanzimat era, but it can also serve to deaden the photographs and their multiple reproductions. Sheehi is at his best when he lets the images speak for themselves. For example, in Chapter Six, he notes the importance of the anonymous studio and sitter, recognizing that the history of photography itself "does not necessarily lie exclusively in the names of photographers, their origins, and their personal stories" (132). This point gestures toward the messy and multivalent nature of nineteenth-century portrait photographs from the Ottoman Arab world instead of fixating on Orientalist dynamics or modernist modes of biographical classification.

The book is most successful when historical anecdotes serve to ground theoretical ideas as with the story of Iskander Makarius (121). This well researched example shines because of the strong archival evidence upon which Sheehi builds his argument. It also identifies previously unknown agents in both local and global networks of photography including photographers, publishers and illustrated journals (al-Lata'if al-musuwwarah, for one). By expanding the circles of image migration beyond hegemonic European systems of exchange and into ateliers like that of Makarius located in Beirut, The Arab Imago reorients the reader towards a "marginalized history" that was until the 1980s omitted from the "European master narrative" of photography (196). Yet, Sheehi's discussion of photographic historiography often becomes ensnared in jargon, transforming stimulating ideas into generalized claims that float untethered to historic facts or material documentation. This renders some of his most intriguing assertions, those that offer a new perspective on photographic portraits, ambiguous in meaning.

As a social history of Arab portrait photography, this book has significant limitations. Photographic historians might feel frustrated by the oversimplification of image narratives both inside and outside of Europe. There are few references to highly relevant extant scholarship within the field, and the literature cited is often outdated. The lack of bibliography continues to leave the reader baffled and yearning for academic context. Moreover, and because Sheehi does not often subject the photographs in question to descriptive treatment or formal analysis, the reader gains little sense of what an Arab photographic portrait might look like, much less how he defines it. (I have to admit that I am still not exactly sure.) Moreover, the classification of Arab and indigenista imagery requires further explanation, especially with regard to who these portraits differentiate in a highly pluralistic Ottoman populace. It is, after all, an entirely ahistorical, post-colonial obsession to define who is and who is not indigenous to a specific geographic territory. Scholars such as Mary Roberts and Ahmet Ersoy have managed to transcend such distinctions by emphasizing the interplay between local and foreign actors involved in the complex world of art production and consumption. Socio-political dynamics and historical details suggest a culturally and geographically specific image rooted in the Ottoman Arab world, but fascination with photographic technology as a way of seeing and being seen flourished in Japan, Persia, North America, Europe and the African continent at this moment in time. There is little mention of continuities between provincial photographic practices in areas outside of the Levant. That international circulation caused photographic trends and technologies to overlap, merge, repeat and engage with one another is surely a vital part of the social history of Arab photography, portrait or otherwise. The fact that Sadiq Bey, who appears at the beginning and end of the book, sold images to both Ottoman and European collectors as well as exhibited at the Venice Geographical Exhibition in 1881, for example, tells us as much.

In the introduction, Sheehi writes "the images in this book are consciously chosen for their formalism, and perhaps, even for the banality and accessibility" (xxxvi). Indeed, the banality and accessibility of portraits, especially the ubiquitous and economical cartes de visite, define the social function and historical value for the genre as a whole. The 1869 portrait made by Abdullah Frères of Abdülhamid Effendi was reprinted as carte de visite, cabinet cards, lithographs and engravings in the European illustrated press until the sultan's deposition in 1909. In Chapter One, two versions of this photograph are treated as different portraits made in different sittings when in fact they are the same image in alternative formats. Similarly, close looking at the photographic sequence in individual albums would strengthen (and even shift) Sheehi's discussion of the Abdülhamid II collection. Without offering concrete data or image comparison, he assumes that the Hamidian collection "provided assurances to class and political allies [...] during a time of political upheaval and repression" (23). The Ottoman court gifted these fifty-one albums to the United States and United Kingdom in 1893 and 1894, respectively. While they were meant to be viewed by an Anglo-American public, the albums ultimately went unseen, languishing uncatalogued in library basements before being "recovered" in 1945 and 1970. Sheehi extends this Hamidian survey project to the provincial activities of actual Ottomans, which is both innovative and erudite. Alas, the mischaracterization of the albums themselves obscures this important connection.

The paucity of deep visual analysis moves Sheehi's argument away from the photographs. What he has written is not a social history of portrait photographs, but a layered theoretical framework for thinking about portrait images that were produced in Ottoman lands at the end of the nineteenth and early twentieth centuries. That said, this text provides a stimulating account of unstudied Ottoman Arab studios, and inspires further investigation into the multitudes of portrait photographs made in the Middle East that permeated both local and foreign visual economies.