David A. Teegarden: Death to Tyrants! 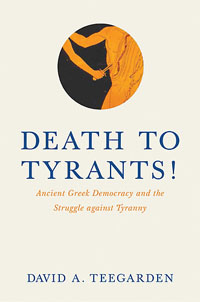 This book offers an engaging, careful study of the evidence for Classical Greek and early Hellenistic anti-tyranny legislation. Teegarden discusses Athenian measures after the oligarchy of 411 (ch. 1); the anti-tyranny law from later Classical Eretria (ch. 2); Eukrates' Athenian law against tyranny of 337/6 BC (ch. 3); the dossier of later fourth-century documents from Eresos concerning trials of tyrants and their repercussions (ch. 4); the early Hellenistic 'Philites stele' from Erythrai concerning the restoration of a statue of a tyrannicide (ch. 5); and, finally, the early Hellenistic anti-tyranny law from Ilion (ch. 6).

Teegarden examines these different examples rigorously and lucidly. The chapters on inscriptions from outside Athens make these difficult texts accessible and revealing. For example, Teegarden elucidates the range of often obscure provisions of the Ilion anti-tyranny law (ch. 6). The careful study of individual cases and their particularities also helps to build up Teegarden's wider argument. He sees these anti-tyranny measures as evidence for the success of democrats, not only in Classical Athens, but also in other parts of the Greek world, especially early Hellenistic Asia Minor: this contributed to 'the world's first democratic age' (220).

As Teegarden points out, the texts he studies represent only the most well-preserved among what was originally a much broader corpus of measures to reinforce democracy. He lists (212) a range of other texts, sometimes fragmentary, which attest the wider pattern, including the interesting inscription from Telos now fully published as IG XII 4 1 132. To these could be added other fourth- and third-century texts from across the Greek world demonstrating democrats' self-confidence and sophistication in the use of institutions, rituals and ideology to reinforce democracy as the only acceptable regime. [1]

Teegarden's book thus bolsters and develops recent moves to emphasise, not only the more general survival of the polis in the Hellenistic world, but also the continuing evolution of participatory, law-governed democracy. [2] He develops a distinctive and original argument to explain precisely what mechanisms, institutional and psychological, would have made ancient Greek anti-tyranny measures effective defences of democracy. In this he is guided by a range of concepts and methods drawn from empirical social science. Prominent among these is the focus on political institutions' role in shaping individuals' incentives, cost-benefit calculations and knowledge of others' preferences which is characteristic of New Institutional Economics. This places Teegarden at the forefront of moves to apply these methods and perspectives to Classics and Ancient History. [3]

His book is a useful test-case of the strengths of this approach, but also of the respects in which it needs to be supplemented with other historical methods and perspectives. Central to Teegarden's case is the argument that the anti-tyranny measures he studies reveal a complex political and psychological understanding of how to influence citizens' behaviour, solving the 'revolutionary co-ordination problem' of how to ensure an efficient response to a coup (21).

At the most basic level, anti-tyranny laws created incentives, often including financial incentives, for potential tyrannicides (a 'tyrannicide incentive package', 72, 184), and corresponding disincentives for aspirant tyrants. However, these laws also influenced motivations in more subtle ways, helping to spread 'common knowledge' among citizens of widespread opposition to tyranny. The laws rested on the calculation that, if a coup did occur, any decisive, early, highly visible act of resistance, such as tyrannicide itself or collective non-attendance in civic bodies such as the Athenian Areopagos (99-105), could be expected to reveal to other citizens both the nature of the coup and the prospect of strong resistance to it, unleashing a 'bandwagon' or 'cascade' effect. This all helped to reinforce the 'threat credibility' of a democratic regime against its opponents.

Teegarden's focus on preferences, knowledge and cost-benefit calculations is helpful in encouraging close attention to the practicalities of spontaneous individual decision-making in times of civic crisis. This approach would benefit, however, from being supplemented with other historical and sociological approaches to political motivation: this would help to bring more into focus the complex blend of institutions, ideology and rituals which could instil and sustain long-term commitments to democratic patriotism in citizens of a Greek polis. [4] Teegarden does include interesting discussions of relevant aspects of civic life, such as religious rituals (38-9, 74), festivals (81) and long-term collective civic memory (96-9, 128-9, 150-3, 171-2), which he analyses mainly for their role in creating and publicising incentives for commitment to democracy. More attention to their emotional and ideological effects, including in shaping citizens' basic civic identity, would help to fill out Teegarden's picture: it would illuminate the deeper commitments and objectives which underpinned anti-tyrannical decisions. It would also help to bring into focus other factors which bolstered Greek resistance to 'tyrants', such as the mobilisation and solidarity of exile movements (for example, Thrasyboulos' Phyle-men in 403 BC).

To make his case, Teegarden relies on what is avowedly a simplified model of the loyalties of citizens of the Greek cities he discusses: he posits in each case quite a clear-cut struggle between well-defined pro-democrats and anti-democrats. More numerous pro-democrats had to compete strategically (in 'games', cf. 122-3) with less numerous, but wealthy and influential, anti-democrats. This simplified model has the advantage that it enables Teegarden to apply his models of political rationality drawn from social science and to measure large-scale trends in the spread of Greek democracy, especially in his appendix.

It would be beneficial, however, to supplement this method with other historical and literary approaches which enable more intensive study of the complexities and ambiguities of Greek political identities and allegiances, and of representations of them in law and rhetoric. On some occasions Teegarden makes clear the difficulties in determining whether a particular individual or regime was tyrannical or oligarchic, in a complex and ambivalent political situation. For example, how would an Athenian Areopagite or ordinary citizen have known for sure whether the Athenian democracy had been overthrown in the later fourth century (110, 111)? This was related to the problem that those who could most help the polis, especially if appointed to significant magistracies, were often the same as those who could most harm it. For Athenian democrats after Chaironeia, pro-Macedonian Athenians with useful contacts were indispensable to the polis' survival, but at the same time potentially suspicious in their constitutional preferences (90). In the light of such cases, it would be helpful to know more about how Greek cities handled the possible risk of an insidious, slowly developing tyranny within an apparent democracy.

In most cases, it would surely have been a matter of contested interpretation whether a particular civic leader was truly a tyrant, or rather a virtuous civic leader seeking the best for the polis. Indeed, the evidence of historiography and oratory suggests that charges of tyrannical and oligarchic leanings could often be highly contentious, because they depended on the particular political standpoint of the author. [5] Democrats could be perhaps too quick to interpret any non-democratic regime or measure as tyrannical (compare 148). Even fellow democratic citizens, such as Demosthenes and Aeschines at Athens, could exchange mutual charges of treachery and aspirations to undermine democracy. Moreover, accusations could flow in both directions between democrats and anti-democrats: anti-democratic thinkers could accuse popular, outspokenly egalitarian leaders of tyranny. [6]

Even in Teegarden's examples, there are suggestions that some tyranny accusations were contentious: some descendants of the Eresian tyrants volunteered to stand trial in the polis (132), which suggests that they expected their arguments might find favour there. Interestingly, the Ilians in their law apparently even took precautions to outlaw any attempt under a non-democratic regime to simulate democratic appointment procedures for magistrates (ll. 111-16, with Teegarden's analysis on page 195): perhaps appearance and reality were not always easy to distinguish. The corollary of this was that the ethical status of a tyrannicide himself could be contentious: those in the best position to commit tyrannicide (such as Timoleon, tyrannicide of his brother Timophanes in Corinth) were often those who themselves had the closest links to the 'tyrannical' regime.

These difficulties in identifying clear-cut vicious tyrants and virtuous tyrannicides have implications for the possible effects of anti-tyranny laws, perhaps not always as stabilising as Teegarden suggests. These laws' fostering of a climate of suspicion and their insistence on a sharp distinction between tyrants and opponents of tyranny could easily have helped to encourage polarising political rhetoric, in which each side claimed a monopoly of legitimacy and virtue, disparaging the other side as traitors or tyrants. There is a cautionary example in the Argive skytalismos of 370 BC, as reported by Diodorus Siculus (15.57-8): the instigation by 'demagogues' of suspicion of some leading citizens prompted those leading citizens to plan an anti-democratic coup; one of the plotters, under torture, denounced thirty leading citizens, who were put to death arbitrarily; the 'demagogues' then provoked the demos into clubbing to death all those who came under suspicion, a total of 1200; and then, finally, when the original 'demagogues' tried to row back from their rhetoric, the people suspected them too and put them to death. In this generalised climate of distrust, those who had first made accusations of undermining the democracy ended up themselves condemned on those very grounds.

To sum up, Teegarden has assembled and closely analysed a very rich and helpful collection of evidence for ancient Greek anti-tyranny measures. He uses this evidence to develop a clear and sustained case for the dynamics of political loyalty and mobilisation in Greek cities. This in turn raises, in an engaging and thought-provoking way, major issues of method in the study of ancient law and politics, which are central to current scholarly debates.

[3] See also Josiah Ober: Democracy and Knowledge. Innovation and Learning in Classical Athens, Princeton 2008 and The Rise and Fall of Classical Greece, Princeton 2015.