Paul Milliman: 'The Slippery Memory of Men'. The Place of Pomerania in the Medieval Kingdom of Poland, Leiden / Boston: Brill 2013 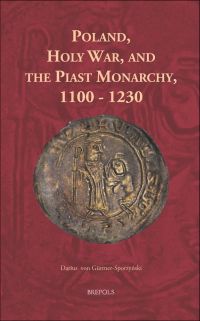 The historiography of the crusades has so far focused on the ideology of holy war and on events in the Holy Land or the Iberian Peninsula. In contrast, research into the crusades around the Baltic Sea has long been of a peripheral nature, most presented in the contexts of the Second Crusade. Several decades have passed since Eric Christiansen's key monograph was published [1], and it has become an increasingly important reference work for attention analysing the crusades in the Baltic region. [2] Christiansen raises two crucial points: 1) The crusades in the Baltic region were perceived as an integral part of Europeanization on the periphery of Latin Europe; 2) In those countries on the periphery of Latin Europe (especially Denmark, Sweden, the Czech lands, Poland and Hungary) which adopted the ideology of the crusades, this contributed to a number of political, cultural and economic transformations.

The extent and range of these transformations differed in each country. Darius von Güttner-Sporzyński's monograph introduces medieval Poland's position during the crusades in the Baltic region. The concept of crusade itself is shown to have influenced the political and religious decisions of the Piast dynasty. Another recent publication by Mikołaj Gładysz is also dedicated to Poland's role during the crusades. [3] Güttner-Sporzyński's work is no mere addendum to Gładysz's study, although it engages with, for example, Gładysz's analysis of Henry of Sandomierz's crusade to the Holy Land. Güttner-Sporzyński offers an alternative view of the reception of the crusades in Piast Poland.

The book consists of an introduction, seven chapters, conclusion, appendices, bibliography and indices of surnames and place names. In the first chapter the author discusses the rise of Piast Poland and the initial military conflicts with neighbouring countries, in which, according to the well-known chronicler Gallus Anonymus, the Poles waged a holy war against the pagans. The second chapter traces the development of the concept of crusading in Piast Poland. The author sees this spreading through three channels: Firstly, ties to other ruling European families which had adopted the idea of holy war in the age of the First Crusade. Secondly, the Holy See and its legates or other representatives introduced the Gregorian reform and of the medieval canon law perspective on what kind of war was possible for Christians. It is revealing that some papal legates came from areas in which the First Crusade had experienced the undisputed success, and others were actively involved in promoting the First and the Second Crusades (such as Gilo of Turcy, Bishop of Tusculum and later a monk of Cluny, who wrote the epos Historia vie Hierosolimitae). The third group consisted of Polish clergy who came from Western Europe (for example Lorraine). These include Alexander of Malonne (d. 1156), who became Bishop of Płock. This diocese was a crucial missionary centre as it bordered with lands populated by Prussian tribes.

The third chapter examines a concrete case of holy war in practice: the conquest of Pomerania. This was initiated by Duke Bolesław III the Wrymouth, who the author regards as the founder of the crusader military tradition in Poland. Whether this tradition had gained specific 'Polish' features remains unclear. It is believed that Gallus Anonymus came from Provence, a heartland of the crusades in France, hence he was not Polish himself. Sources from the 12th century (primarily the Gesta of Gallus Anonymus) depicted Boleslaw's war against the Pomeranian dukes, and that of his predecessor Bolesław the Brave against the Prussian pagans, as a battle between good and evil and thus a just war as defined by Saint Augustine. Therefore, it is not surprising that Boleslaw III and his soldiers were represented as the new Maccabees and warriors for Christ, fighting Prussian apostates, who were portrayed in compliance with the principle of interpretatio christiana.

Chapter four traces the struggle for power between Bolesław III's sons. Władysław II the Exile entered into a military alliance with the Prussians and supported a peaceful mission to Prussia by Bishop Henry of Olomouc, which never took place. His brother and political opponent, Bolesław IV the Curly, allied with Bishop Alexander of Płock to support the crusader ideology. Bishop Alexander himself may have had a somewhat contradictory attitude to the crusades, which the author does not resolve. He was peaceful as well as warlike, founding Benedictine and Augustinian monasteries, and the door of his cathedral was designed based on the gospel verse 'I am the gate; whoever enters through me will be saved' (John 10:9).

The fifth chapter analyses the role of another Piast, Henry of Sandomierz, during the crusades in the Holy Land, and how the Piasts exploited the concept of holy war to attain local objectives. Described by Saint Bernard of Clairvaux, Henry emerges as a new knight, who introduced the Hospitallers to Poland. Thus in Piast Poland by the middle of 12th century, holy war was already an integral part of Latin Europe's knightly culture.

The two remaining chapters are devoted to wars waged by Piast Poland against neighbouring Prussian tribes. By 1147-8, the Wendish Crusade was supported by the bull Divini dispensatione, issued by Pope Eugenius III, granting them the right to eos Christianae religioni subjugare. It is undisputed that political subjugation of Christianity is meant here. Nevertheless, Vincentus Magistrus portrayed this as a crusade against apostates, according to the famous principle compellere intrare. It is evident that the words attributed to Bernard of Clairveaux-donec, auxiliante Deo, aut ritus ipse, aut natio deleatur-cannot be traced in this chronicle, whereas the Piasts tolerated Prussian paganism to a certain extent, since Prussians were hired by Polish dukes to abate internal wars. Yet not all Polish-Prussian warfare was classified as a crusade. Only a few military raids (in 1147, 1166, and 1192) against the Prussians were treated as a part of a holy war by the chronicler Vincentus, although there were many more military clashes between Prussians and Poles. Of these three, only 1147 was granted crusade status by the Pope. Thus it is unclear whether the Polish political and military authorities perceived the later battles as an integral part of a religious war or whether the chronicler and his contemporaries saw them as honouring the crusading tradition of the Piasts. Vincentus depicts the Prussians as contra Saladinistas, describing a crusade in 1192 against Prussian Pollexians; this echoes the collapse of the Kingdom of Jerusalem in 1187. Nevertheless, the missionary programme represented on the doors of Gniezno Cathedral indicates that an alternative to an ongoing compellere intrare principle for Christian missions existed alongside the idea of a holy war in Piast Poland.

This concept did not evolve in a smooth linear fashion; while a crusade against Pomeranian pagans/apostates in 1102-28 was portrayed as a just war, a crusade in 1147 was presented as Piast territorial expansion. Wars against adjacent pagan tribes acquired the pattern of the crusades because of the increasing participation of the growing Polish knighthood and political elite. Yet the first military orders to be established in Poland-Hospitallers, Holy Sepulchre and Knights Templar-did not initially set out to fight the pagans there. It is important to remember that when the idea of holy war was gaining momentum in Poland, the tide of opinion was turning against the crusades in Western Europe. [4] Thus Piast Poland is typical of the East Central European countries which took more time to adopt a concept introduced from further west.

Güttner-Sporzyński's monograph essentially complements research into the crusades around the Baltic Sea. It makes it possible to formulate new questions for subsequent research and increases our understanding of the phenomenon of holy war and its reception in the Baltic region.

[3] Mikołaj Gładysz: The Forgotten Crusaders. Poland and the Crusader Movement in the Twelfth and Thirteenth Centuries, Leiden et al. 2012.