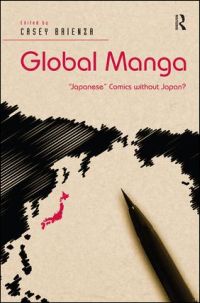 Following hot on the heels of anime in most countries Japanese manga has also become a staple of the global pop cultural terrain from the late nineties, early two-thousands onwards. The explosive growth of authorized editions of translated Japanese manga, not to mention the concurrently expanding breadth of unauthorized scanlations available online, has led to these works inspiring creators in various other countries to write and draw manga as well. The status and development of these works of 'global manga' vis-à-vis Japanese manga, has been one of the central questions animating the narrower field of manga studies, with possible ramifications for not just the wider domain of comics studies, but also understanding transnational cultural production in general, as Casey Brienza has repeatedly stressed in her works. Not only is she one of the few researchers working on manga from a sociological perspective, but Brienza is also the leading expert within the Anglophone world on the topic in relation to the study of the wider publishing industry.

The edited volume Global Manga from 2015 is the prequel-sequel to Brienza's groundbreaking monograph on the development of the manga publishing industry within the US, Manga in America published in 2016. The ten chapters, thoroughly contextualized by Brienza's introduction - explaining key concepts from her body of work, such as 'domestication' and the industry definition of manga -, offer an overview of a range of perspectives and problems in relation to manga produced outside of Japan, and as such the book is a valuable stand-alone resource. However, it truly shines when approached in conjunction with Manga in America as a companion volume that expands on the monograph in scope - looking beyond the US market - and shifting its focus somewhat, addressing mainly original non-Japanese manga.

The foregrounding of North America - five out of ten chapters - is in part again, no doubt, an unintended result of the volume acting as an extension of Brienza's own research. This is most obvious in the two chapters written by industry insiders Magda Erik-Soussi and David Blanchard. These two personal accounts not only help vividly illustrate the rich interview material behind Manga in America, but the former also stands as one of the highlights of the volume, offering a highly reflexive discussion of the empowering nature of the powerful female protagonists and novel 'Female Gaze' narratives discovered by a generation of girls in Japanese series like Sailor Moon.

Out of the three chapters that could be broadly categorized as having a more historical approach, Tiago Canário's text on the French 'Nouvelle Manga' movement also reflects on the marketing function of such labels, but is further unique within the volume in the way it juxtaposes different media - in this case film, French New Wave cinema specifically, and comics - in its analysis. Roberto Elísio dos Santos, Waldomiro Vergueiro and Victor Wanderley Corrêa's chapter highlights the role of the Japanese diaspora and artists of Japanese descent in Brazil in the introduction of the 'manga style' as one of the hallmark features of the country's comics history. As the shortest chapter in the volume, it would have been interesting to see a more developed discussion of the final and most intriguing point raised by the authors on how "manga-like stylistic features" (53) are being incorporated by even such giants of the Brazilian comics world as Mauricio de Sousa. Finally, Karl Ian Uy Cheng Chua and Kristine Michelle Santos' overview of the development of sequential art in the Philippines is perhaps the most interesting of these historical accounts in the way it draws attention to the often naturalized - and even nationalized - status of originally foreign comics traditions, compared to which manga is often seen as alien or disingenuous. As the authors point out, the contested status of 'Pinoy manga' and its position in relation to Philippine 'komiks', with its roots in US comics, mirrors "the debates that surround Philippine identity" (193).

Two of the volume's chapters offer detailed examinations of the various ways in which the meeting and hybridization between Japanese manga and US comics can play out. Aaron Pedinotti's comparative analysis of the titles Scott Pilgrim and MANGAMAN is definitely one of the highlights of the volume. In his insightful close reading of these works he not only identifies two different approaches to the problem of stylistic influences and hybridization, but also uncovers a surprise twist in the diametrically opposed tensions found between these stances and their respective series' structural messages regarding the assertion or questioning of racial and national homogeneity. Although Manuel Hernández-Pérez's chapter provides a somewhat shorter look at the actual practices of hybridization in Marvel's Mangaverse run of titles, the author provides a rich background to his analysis by surveying the development of both US comics and Japanese manga and the superhero trope in particular from a cultural industries perspective.

Alongside Canário's text on French 'Nouvelle Manga' two more chapters address original manga from Europe. Nicolle Lamerichs not only provides brief historical overviews of the development of manga production in the Netherlands and Germany, but also demonstrates the complex transcultural nature of these works by focusing in on an anthology of original pieces from each country. Both the theme of transculturality and the attention to the role of dōjin culture are also taken up in Antonija Cavcic's chapter on German manga. However, what really stands out in her text is the way she utilizes the 'Gothic mode' as a framework that cuts across conventional genre categories such as shōjo, shōnen or boys' love to approach both Japanese and German manga from a fresh perspective that helps draw out the way manga has enabled women creators to give voice to their experiences and positions within society.

Lastly, and in many ways most importantly, Brienza in her own chapter, taking Svetlana Chmakova's Dramacon as her starting point, focuses in on the very problem of what manga is, especially in the context of creators and audiences outside of Japan. Although the question is taken up by other authors in the volume, like Cavcic or Hernández-Pérez, as well, Brienza offers the most in-depth treatment of the subject. Based on her analysis of a discussion thread on Anime News Network she identifies and provides thoughtful interpretations of five different positions in relation to the central problem of what constitutes manga. She then proceeds to engage with the actual stakes at play regarding the debate itself within anime-manga fandom outside Japan, and in the US in particular, and uncovers a configuration of unintended ethno-racial politics and privilege potentially at play within a fandom that on the surface would seem to offer a respite from such realities of everyday life.

The analyses regarding 'global manga' will most certainly further develop in the coming years. The present volume will, however, undoubtedly remain a fundamental touchstone in those future debates.