Charles Walton: Policing Public Opinion in the French Revolution. The Culture of Calumny and the Problem of Free Speech, Oxford: Oxford University Press 2011 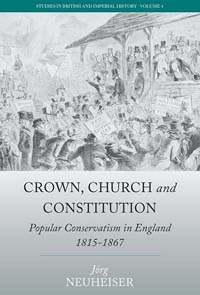 Jörg Neuheiser's innovative book, based on his PhD dissertation, was first published in German in 2010. [1] Thanks to the Geisteswissenschaften International translation prize, however, it is now also available to an international audience. In his book, Neuheiser studies the role of popular conservatism in English political culture in the first part of the 19th century. This is both a highly original and long-awaited focus. Given the wide-spread ideological mobilisation of England's lower classes during the French Revolution and the Napoleonic Wars, and the political takeover by the Conservative Party in England in 1867, popular conservatism merits far closer attention than existing scholarship, which tended to privilege liberal or radical political mobilisation, has hitherto granted it.

The guiding thread of Neuheiser's study seems to be less the classical question that he asks at the very beginning - namely, why there was no revolution in 19th century England - but rather the conservative political participation of the lower classes: Did conservative attitudes spread after 1815? How did the Conservative Party manage to also win popular support prior to 1867? How did popular conservativism relate to its liberal or radical alternatives and to the labour movement?

These main questions, posed early on, make clear that Neuheiser adopts a productively revisionist stance against established narratives of the political role of the English lower classes. Where the author systematically positions himself in a critical yet constructive dialogue with the weighty existing literature on political loyalism, elections, constitution, and religion, testing the explanatory reach and validity of each, he demonstrates a carefully balanced approach. However, his perspective is also refreshingly unorthodox as his approach to politics as a social practice and to acts of symbolic communication is methodologically informed by the cultural turn and by a strong interest in the discursive dimension of politics.

Neuheiser tackles the complexity of his subject by focussing on three clearly defined local cases of popular conservatism: the greater London area, the West Riding of Yorkshire, and the Bolton area in Lancashire. In doing so, he approaches conservatism from different sides, without attempting to impose a rigid empirical framework, of the type that more traditional social historians might have sought. As his main source, Neuheiser meticulously analyses local newspapers, which, though not strictly offering a perspective 'from below', at least provide a vantage point from which to observe political mobilisation closely. The book is organised into three sections that each present two chapters focusing on socio-political practices and political discourse respectively. The main subjects are loyalism and patriotism, religious conflicts, and the relation between popular conservatism, social justice, and morality.

Chapter one, on loyalist celebrations of the monarchy in the 1820s, highlights the point that precisely which events historians look at, which places, and at which times, makes a difference to their interpretation of popular behaviour. On the basis of his examples, Neuheiser convincingly presents a nuanced vision of mass behaviour underpinned by his own culturalist perspective, and positions this against the protest-orientated historiographical tradition that covers only limited parts of the political spectrum.

Chapter two, on popular conservative constitutionalism, and in particular middle and lower class associations under the patronage of the Conservative Party, is a good example of an analysis of symbolic communication that looks beyond bread-and-butter topics such as factory labour and the New Poor Law from 1834. Although Neuheiser does not completely exclude Chartism from his analytical horizon, he ultimately adopts a relatively broad perspective on political participation, by analysing parades, banquets, demonstrations, and forms of associative sociability. Even if they did not result in immediate popular contributions to political decision-making, such events nonetheless strengthened the ties between the Conservative Party and its popular supporters.

In the third and fourth chapters, Neuheiser pleads for more attention to Anti-Catholicism and Protestant identity, both of which were far from waning in the years around the 1829 Emancipation Act, as scholars such as Linda Colley have argued. [2] Here, the author's discussion of confessional conflicts offers just one poignant example of how the many voices of the 'people' can be heard in this book. Within local contexts, protest, loyalism, and patriotism among the lower classes were often capable of being permeated by both the political left and right. Cases of political street culture analysed by Neuheiser, such as the Guy Fawkes riots, are not only revelatory for our understanding of lower class anti-Catholic, anti-Irish, and anti-immigration attitudes, but also provide important ground upon which political mass behaviour can be understood as a multi-causal phenomenon, from a perspective that considers a whole range of explanatory factors. At this point, readers might regret that Neuheiser is rather parsimonious in granting more narrative or biographical background to the collective actors that he presents.

Chapter five partly compensates for this austerity by offering a highly interesting spotlight on Tory radicalism, centred around emblematic figures such as Richard Oastler. Through the example of situational anti-Whig alliances between Tories and the lower classes, found in the factory reform movement, Neuheiser shows how otherwise antagonistic social groups could unite around a shared political language, in order to oppose a common enemy. Here, his relational approach illustrates how far the social history of England has travelled since the days of E.P. Thompson and his disciples. Finally, chapter six considers the entanglements between conservative mobilisation and ideas of moral norms around anti-alcoholism, gender relations, and paternalism.

In his conclusion, Neuheiser once more emphasises the "relative autonomy of political communication" (263) and rightly insists on the "extraordinary multi-dimensionality of the political realm in England" (264). Such findings invite a European comparison of conservative mass mobilisation that would, in this reviewer's opinion, be more stimulating to pursue than the slightly outworn 'No Revolution' question mentioned above.

All in all, Jörg Neuheiser offers a well-crafted and well-drafted example of "seeing the masses" (134), especially conservative plebeians, in 19th century English social history. The text, whose translation was led by the author's wife, Jennifer Walcoff Neuheiser, stands out for its clarity and attention to detail. It is also a condensed and tightly written volume: at times, the reader, though impressed by Neuheiser's argumentative-dialogical style, might wish for a more generous use of examples and of the 'stories' contained in the immense sample of press articles. In terms of further scholarly exploration, meanwhile, one possible avenue to consider would be to extend the view on debates around "Yorkshire slavery" to pro- and antislavery movements, thus adding to the rich literature on British abolitionism, from the underrepresented angle of popular conservatism.

Having been favourably received by the German-speaking community, Neuheiser's important study will now be appreciated by a larger number of both specialists of the 19th century English lower classes, and more general readers interested in how to write social history as a cultural history of political communication.