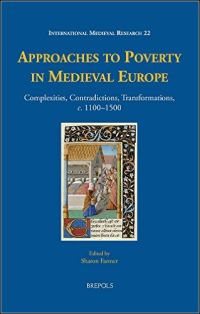 Medievalists assume the problem of poverty as a common issue in much of their research. They, nevertheless, fail to comprehend the wide range of topics that can be approached through the representations, expressions, and social subjects of poverty in History. The most influential debate was held within social history, with two of the most renowned medieval historians dedicated to the history of social representations of poverty and the poor, Bronislaw Geremek and Michel Mollat. Despite many differences between them, they agreed that the Black Death meant a turning point in the status that the poor and poverty had in the cultural and social practices of medieval people. Hence, focusing on these transformations through medieval sources would open the field and make it possible to achieve a better understanding of how medieval society saw itself through this lens.

The volume reviewed is a proud heir to this perspective, not only because it takes into careful consideration the historiographical traditions but also because it pushes the boundaries, trying to find new questions and offer new assessments. In its introduction and nine studies, this collection of articles focuses on a variety of problems with the ultimate objective of opening the field and extending its borders. The geographical extent of the analyses concentrates especially on Western Europe from the twelfth to the late fifteenth centuries. This is coherent with the historiographical frame chosen and expressed by the editor, because the transformations caused by the Black Death are acutely significant to this perspective.

Beyond the field in which it is clearly inserted, this work allows other historical discussions. Regarding the cultural and religious frame of thinking on medieval times and how it became a reality in everyday life, poverty shows the deep contradictions in perspectives and practices towards the poor. The revolution of charitable institutions and the role that alms played in moral thought were pivotal in a society traversed by crises, violence, and instability. The outcome of the reflection on these problems is intelligently displayed in this volume, in which poverty and the poor are rediscovered as a multilayered significant. Poverty is a key subjectivation of Christian and Jewish thought. The poor are subjects of charity, care, fear, and a multiplicity of symbolic constructions.

The editor, Sharon Farmer, clearly states the purposes of the volume in the introduction and summarizes the fundamental debates surrounding the history of medieval poverty. Thus, she defines the objectives of the collection of articles by presenting diverse perspectives concerning the role of religion in the shaping of attitudes towards the poor.

The works contained in this volume approach a variety of subjects from diverse outlooks. There are perspectives on the agency of the poor and attitudes towards them, such as the study of charity and charitable institutions. Studies on the transformation of traditional institutions - the Almoina of Barcelona transformed by the fourteenth century crises - and the rise of new ones like medieval hospitals, which created a truly new culture of compassion, show how traditional attitudes towards the poor shifted to a progressive secular control of the institutions. Only the voluntary poor, those imitating Christ's or Francis's poverty and humility, were positively regarded. The real poor were mere subjects of charity, not objects of consideration.

These studies are paired, in this volume, with several others that tackle the attitudes of mendicants and Jewish communities towards poverty and the poor. There was an evident tension between the will to be poor and the activity of begging, which forced mendicants to produce an organized thought on the topic. Even then, this thought was not exempt of contradictions: What happened when a Franciscan was appointed Inquisitor? How would he obey the rules of his order? This issue is also proposed through the rabbinical Ashkenazi Tosafist revolution, and the first ever enounced prohibition forbidding Jews from aiding someone who had broken the Law. This raises a statement: Poverty was a very flexible subject and object, and admiration of the poor was an abstraction of the holy lives of Christ and the Saints.

What are the poor's positions in medieval society? Agency of the poor is also a very appealing topic. The legal regimen amplified by Henry II in England enabled the poorest freeholders to access help to legally protect themselves from the actions of neighbors and Lords. The agency of those otherwise seen as passive actors shows again the abilities of the poor to defend themselves. Along the same line, the inclusion of a political approach illustrates the growing gaps between the poorest and those who can be described as having an average middle income. Even educated professionals such as teachers cannot be grouped specifically in an economic segment. Teachers could be poor or prosperous, they could obtain a good income from their work or be exempt from paying taxes because of their condition.

In some ways, these studies are summarized in the final one, where Anne M. Scott analyzes the symbolic representations of the poor in medieval art. Focusing on three literary works, each from a different century between the thirteenth to the fifteenth, this study assesses the transformation of the representation of the poor from an ugly but powerful teacher of humility to a strong - and ugly - woman who shows the power of personal will in the rising Humanism. In short, this article shows how poverty and the poor were transformed in the eyes of medieval people and culture.

In sum, this volume widely collaborates with the reflection on the topic of the poor and poverty in History in general and in the medieval history of the poor in particular. The approaches adopted in this collection illuminate the flexibility of cultural medieval practices and their shifting nature. But more interestingly, the works here reviewed pose questions that are of interest to anybody who sees the deep contradictions implied in the analyses of the sheer topic.