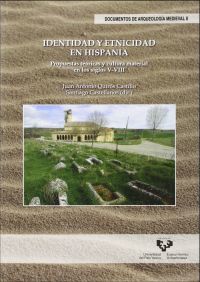 The last twenty-five years witnessed a renewed attention for the themes of identity and ethnicity in the Late Antiquity. But this renewal could not ignore the prior approaches to these questions during the twentieth century, especially when they were mingled with contemporary narratives about the nation and still widely present in the academic discourse. This was the case with Spanish historiography, where this renewed attention had to confront these prior approaches in a critical way and by using modern theoretical tools. The main result was a still ongoing essential reexamination of Spanish historiographical narratives and paradigms that are both historical and archeological.

The volume under review, edited by Juan Antonio Quirós and Santiago Castellanos, appears exactly within this context. Its objective is to address "from multiple perspectives, the building process of political communities from the fifth to eighth centuries in the northern sector of the Iberian Peninsula from diverse scales (kingdom, regions, village)" and also "to analyze the use of strategies of distinction" (22). But such objective is pursued in a context in which the "archeology and history of the Iberian Peninsula found themselves immersed in a deep process of deconstruction of the narratives" (23).

The volume gathers seventeen articles (plus the Introduction) that were discussed during 2013 in two different meetings in Spain, both investigating the same context - the Iberian Peninsula from fifth to eighth centuries: the first one addressed the "conceptual basis" of identity and ethnicity "from the perspective of the textual and numismatic register" (12); the second one developed a "critical assessment" of studies in funerary archeology developed in the last years, especially the ones that "put in question some of the traditional approaches" (12). In this way, the articles gathered in the volume aimed both to develop a critique of the old approaches as well to propose new ones. The number of articles in the volume and their variety presents the reviewer with the impossible task to discuss all of them separately. To avoid to resort to a mere listing of the volume's index, I will discuss some of the articles bellow with special attention to the most central discussions and in line with the volume's main objectives. [1]

The editors' Introduction (actually the volume's first chapter) has two main (and difficult) tasks: to present an overview of the debate about identity and ethnicity in Late Antiquity and to introduce the volume's content, arguing for its internal logic. The editors are very successful in the first task, but this also contributes to make increasingly clear the differences between the volume's two halves - history and archeology. This chapter rightly reveals that the debate on identity and ethnicity have different meanings and objectives in history and archeology, but this is followed by an overfocus on the archeological side of the debate. The critique of the "visigothic paradigm" in archeology and the development of alternatives to it (theoretical, methodological and technical) are clearly the editors' main preoccupations (28).

The articles in the first section (chapters 2-6) were all written by historians and deal with different aspects of ethnicity: from the creation and reproduction of ancient repertories about the barbarian peoples as archetypes (C. Martínez, chapter 2) to the development of the Suevic monarchical institution and the relations between the Suebi and the provincial population (P. Díaz, chapter 3). The central question about the meaning of Gothness in the Visigothic Kingdom of Toledo is also examined and receives two very different answers: R. Valverde (chapter 4) argues for the traditional narrative of ethnic mixing and "acculturation" (77) after the Third Council of Toledo, arguing for the preservation of the Gothic ethnic identity of only a small ruling group and aimed to preserve their control over the "public properties" (79); E. Buchberger (chapter 5) defies this traditional narrative and argues that term "Goth" had "three main senses" in Visigothic Spain - "political, religious and descent-based" (88). In this way, "religious, political and ethnic identities coexisted in Visigothic Spain" in a much more wide way and were transformed over the sixth and seventh centuries (97). Unfortunately, neither Valverde nor Buchberger discuss or mention each other and their opposing interpretations of the same question.

The first section offers a good panorama of the current positions in the historiographical debate. Nevertheless, the attention the editors showed in the Introduction to locate their volume within the contemporary theoretical debate is not present in these articles. With the exception of Buchberger, the authors do not discuss what is ethnicity (or what concept of ethnicity is being used) in theoretical terms. The main result of this theoretical void is to tacitly accept a concept of ethnicity that is above all "objective", descriptivist and under increasing criticism (including in the volume's own archeological section): the identification of ethnic identity based on a list of fundamental characters such as language, dress, weapons and rituals.

The volume's archeological section is much bigger, more developed, varied and in line with the perspectives presented in the Introduction (chapters 7-18). It is also abundantly illustrated both by photographs and figures, which are essential for a good comprehension of the texts. All of the twelve articles in this section deal with funerary archeology, even if in different ways. We can group them into three types: theoretical critiques (chapters 12 and 13), synthesis (7, 11, 16, 17 and 18); and case studies (8, 9, 10, 14 and 15).

Among the theoretical critiques C. Tejerizo (chapter 12) presents the most developed theoretical discussion of the whole volume and a powerful critique of the "Visigothic paradigm". The author proposes that the grave goods "are the expression of a power relation between some peasant contexts (...) and the supra-regional powers that would use these objects as a way to legitimize their presence in theses spaces" (234), a formulation that is not strange to other articles in the volume, but that receives here the most solid demonstration. To ground this hypothesis, the author also presents a large synthesis of the evidence.

The synthesis is an important part of this volume and aim to present a wide view of the current state-of-the art in diverse geographical areas and themes: as an example, the article by C. Tente and Antonio F. Carvalho (chapter 7) is one of the most informative articles: it discusses the development of Portuguese funerary archeology from late ninetieth century to the most recent ones. The authors' conclusion is unequivocal: "we are watching a renewed interest for the archeology of the early middle age in Portugal" (139). And even if the authors also recognize that this knowledge is yet fragmentary, they also assert that "in the short term the Portuguese enquiry in this domain will present significant developments" (140).

As expected, the specific analysis is very varied, from studies of necropolis in Portugal to Mérida and Cantabria. The article by A. Vigil-Escalera (chapter 14) is one of the most interesting. The author discuss the necropolis of Gózquez and El Soto, arguing for the "compatibility of diverse [religious] affiliations in the same necropolis" (249). In this way, the author concludes that "during the early middle ages it is the local community's territorial identity the one that has a tendency to impose itself over any other form of affiliation, be it ethnic or confessional (religious)" (269). This is a very important hypothesis and one with a potential to develop the debates of identity and ethnicity in new directions.

The difficulty to review this volume in detail is not only a consequence of its size and varied contents, but also of its lack of concrete unity. The volume do presents the general thematic unity expressed in its title, but any consideration past this point encounters difficulties. For example, it is not clear why the volume's articles are not organized in sections - including the most obvious choice used in this review, history and archeology. One possible explanation for this odd editorial decision is exactly not to stress these questions: the two sets of articles clearly independent of each other, the volume's imbalance (five articles in the first set, twelve in the second) and the complete lack of dialogue between the articles. It would not be an exaggeration to say that the volume is if fact two different books tied together by a common introduction. As we mentioned before, these problems are clear in the editors' introduction and even clearer in the lack of a general conclusion that should have gathered the central themes that are present in all (or at least most) contributions.

In conclusion, this is an important and informative work, but its greatest strength - to present a wide variety of themes and approaches - is also its greatest weakness - the lack of any concrete unity. Even the extremely important theoretical reexamination of traditional narratives in Spanish historiography and archeology are unequally explored throughout the volume. And the most explicit evidence of this inconsistency is the almost inexistent dialogue between the articles gathered in the volume. This may be unavoidable given that this volume is the product of a recent development in Spanish historiography - it may be too soon for any kind of unity to arise. And in such context, this volume is a very important milestone of a still ongoing process.