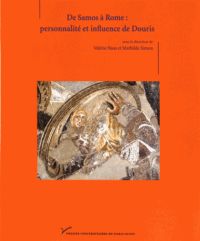 This book deals with Duris of Samos, his historical and familial background, his role as pioneer of aesthetic theories connected with art history, mimesis and tragedy, the influence exerted by his works on Roman writers (esp. Diodorus, Caesar, Livy and Pliny the Elder), the character of Hellenistic historiography and its reception in Rome.

A central question raised by the organisers of the conference is whether Duris applied to historiography Aristotle's notion of dramatic mimesis. Several plausible answers have been provided by the text.

A sort of distortion in reading Duris' historiography by nineteen- and twenty-century scholars was due mainly to Plutarch's criticism of Duris. [1] The historian is reproached by Plutarch for his taste for a tragic theatricality which altered historical facts in order to make events more impressive or pitiful (Per. 28, Alc. 32 = FF 67, 70 Jacoby). It became common opinion among scholars that this kind of historical narration, inspired by the Aristotelian notion of mimesis, developed from the fourth century BC onwards; 'tragic historiography' was later criticised in the Hellenistic age (i.e. by Polybius). As we shall see, this idea is far from being unanimously accepted, and this book, offering interesting reflections on it, is a good starting point for future debates on the issue.

Kebric's paper (esp. 341-349) demonstrates that, contrarily to a shared opinion among scholars which presents Duris as one of the foremost practitioners of the so-called 'tragic history,' there was no separate historical genre in Duris' times that can be defined as 'tragic'; for both Greeks and Romans considered a dramatic style of history more desirable than others. So, for example, Polybius' criticism of Phylarchus (2.56.ff.) in reference to his emotional way of writing history might easily be applied to Caesar's De bello gallico as well: in several passages the Roman historian arouses the pity of his readers exactly in the same way as Phylarchus does.

Speaking of dramatic mimesis implies to turn to fragment 1 of Duris, whose exegesis has required philological and historical tools of enquiry (Baier, Ottone and Veloso). In reference to fourth-century writers (Duris and Aristotle included), Veloso (204-206) connects μιμέομαι and mimesis with the concept of 'story,' 'account,' 'tale' (this concept was considered as an 'object' of mimesis by earlier scholars); therefore the canonical distinction between history and poetry, non-fiction and fiction, should be discarded. In fact both genres aim at telling stories: poetry differs from history in that it follows the criteria of plausibility and necessity, but their products may result similar.

It remains open to doubt whether or not Duris was a disciple of Theophrastus (cf. Kebric 213, Ottone 212-213), even though Aristotle's influence on Duris' thought may well be supposed. Aristotle and Duris would show some similarities in suggesting that graphein is a kind of writing very close to Isocrates' epideictic genre, while phrasein pertains to oral performances, typical of Demosthenes' forensic oratory (Ottone 225-242). For Veloso (197) phrasein refers, though, to technical issues, namely to speeches contained in historical works, while graphein indicates the remaining parts.

Perhaps the most exciting and innovative part of the book is the third one, where the debt that Roman historiography owes to Duris is dealt with. This is, in fact, a controversial topic due to the fragmentary state of the evidence, and requires a re-discussion of the traditional Quellenforschung. However, generally speaking, almost all the papers of this book take into account the source criticism and pay great attention to Diodorus, judged as dependent upon Duris. According to Baier, Roman historiography is inspired by Isocrates' model with respect to stylistic matters; it follows Duris' practice in that it offers a 'dramatic' content. In some instances Livy may not rely upon Duris' historiography, but on the Roman annalistic tradition (Briquel, Liv. 10, and De Franchis, Liv. 30.12-15). Livy's debt to Duris is firmly maintained by Simon. Guittard shows connections between Duris and a lot of Roman writers (Accius, Cassius Dio, Cicero, Ennius, Florus, Frontinus, Livy, Orosius, etc.). Naas reconsiders the traditional source criticism of Duris in relation to Pliny the Elder. She abandons the idea that, in order to attribute a passage to someone, he/she must be quoted by name in that passage. Pliny probably read Duris; however, he got his information both directly, by reading Duris' works, and indirectly, through lists of authors.

As for Duris' contribution to literary criticism, the description of a statue of the river Thermodon bearing the figure of an Amazon (Plut. Dem. 19 = F 38 Jacoby) is highly controversial, and may have been invented (Dan 190-193). The identification of the two subjects is dubious, since the statue of a river usually bears the figure of a city and not that of a person. Duris' identification of the Thermodon river in Boeotia (earlier writers gave other locations for it, in Pontus and in Plataea), in association with the battle of Chaeronea (338 BC), is explained by Dan as a way to define Greek identity: in the Archaic period the mythical association of Thermodon with Pontus shows ideal connections with Greek colonisation; in the Classical age the association of the river with Plataea hints at the Persian Wars; now, in Duris' times, Chaeronea has become a new Plataea, a reminder of the Greek struggle for freedom.

There are no current books related to the topic of this work. One may mention authoritative monographs, such as F. Landucci-Gattinoni, Duride di Samo, Roma 1997, P. Pédech, Trois Historiens meconnus: Theopompe, Duris, Phylarque, Paris 1989, 259-389, and a few studies on 'tragic history'. [2] But there are no recent scholarly attempts at giving an overall view of issues pertaining to Duris' historiography.

The book is in line with current scholarly approaches in dealing with ancient fragmentary historians, [3] since it gives a fresh reading of ancient fragments which focuses mainly on authors quoting Duris along with the quoted passages from Duris' works (see, for instance, Ottone's contribution). Broadly speaking a lot of attention is payed to the old-fashioned source criticism of Duris, which is rethought in the light of new theoretical approaches (esp. Baier, Naas, and De Franchis).

Information provided by this book in terms of dates, bibliographic references, footnotes is accurate and complete. Perhaps indices of names and/or content, if added to the text, would have helped readers to find relevant evidence through quick searches. Where pertinent illustrations have been inserted; they are very helpful to readers, such as those found in Prioux's contribution dealing with art and literary criticism.