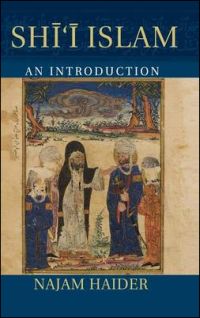 Najam Haider is an Assistant Professor at the Cambridge University. He occupies himself with studying early Islamic history, the methodology and development of Islamic law, and Shī'īsm. His first book The Origins of the Shi'a: Identity, Ritual, and Sacred Space in 8th century Kufa came out in 2011 and was published by Cambridge University Press. Shī'ī Islam: An introduction is his most recent work. With this work Haider is trying to give the reader a broad introduction to Shī'ism. The book treats the historical aspects of Shia Islam. It focuses on the rise of the different groups and sects, like the Zaydi's, Ismā'īlis and the Twelvers. He compares Shia Islam with Sunnī Islam, which is the dominant group within the Islamic tradition. While doing that he is providing the reader a deeper and historical background of the different groups. Haider explains how the book is constructed which prepares the reader and gives the reader more information about what can be expected in the book. The book consists of four sections. Each section has its own subject and consists of two or three chapters providing further information on the subject. These chapters consists of paragraphs and sub-paragraphs providing detailed information about the topic. In the first section 'Theology' he gives a historical background of the Shia Islam. The Shi'is mostly believe that 'Alī should be the righteous successor of the Prophet. In the first chapter of this section Haider discusses the 'adl (Rational Divine Justice) meaning that all the Muslims in the world believe in God and his Divine Justice, but they differ in the interpretations of this belief and they understand this aspect rationally, each in their own way. The Sunnīs adopted the Ash'arī theology and the Shia's rely on the Mu'tazili theology even though the Mu'tazilis criticized the Shia's. The Ash'arī theology based the divine justice on God's actions and commands. These are being brought to the community by revelation. The Mu'tazili's differ in their understanding of the divine justice. They do believe that God can be rationally understood by human beings. In contradiction with the Ash'arī they believe that the Qur'an is created instead of revealed. In the second chapter Imāmate (legitimate leadership) Haider explains that 'Alī was the legitimate successor to the prophet with the function of a political head and a spiritual authority. Chapter 3 'community' and chapter 4 'fragmentation form together the second section titled 'Origins'. It discusses the origins of Shia Islam claiming that 'Alī is the righteous successor of the prophet since he was raised by the prophet from a young age, because the Prophet declared him as his successor and on top of that, being his cousin and husband of prophet's daughter, Fatima he is part of the Ahl al bayt (family of the Prophet).

The Shia believed in the paternal lineage of succession. So after the death of 'Alī, he should be succeeded by his sons. The third section 'constructing Shī'īsm' divides itself into three chapters and clarifies the Zaydism, Ismā'īlism and Twelver Shī'īsm. Zaydism distinguishes itself by being the group in Shia Islam with the most similarities with Sunnī Islam. Besides that, they do not designate the people who don't believe in 'Alī as the righteous successor as a kafir (disbeliever); something that the other two groups did. Ismā'īlism arose in the late ninth century with the dispute about the succession of Ja'far al- Sadiq in 765. The last group the Twelver Shī'īsm based its theory on three components: first the reliance on the Mu'tazili theology, i.e. tawheed (the divine oneness). Even though tawheed is the foundation in Islam, the Mu'tazili differ in this point of view claiming that the word of the Qur'an isn't indistinguishable of the words spoken by God. The second one is rational divine justice, and the principle of doing good and forbidding wrong, and thirdly legal reasoning. With the occultation of the twelfth Imām the authority lies in the hands of the religious scholars who 'invented' the rational discourse. The safavid dynasty (1501-1722) turned from a Sufi order to a Twelver Shī'ī dynasty under shah Ismā'īl (d.1524). And the rise of rationalist (usūli) over traditionist (akhbāri) legal discourse in the late eighteenth century. The last section discusses Shī'īsm in the Modern World. It encompasses three chapters. Haider started with the early history of Shī'īsm and chronologically ended his book with Shī'īsm in contemporary life. The first chapter 'Zaydism at the crossroads' contains information about the Zaydi Shī'īs in Yemen. Many Zaydi groups have been influenced by Sunni traditions and other groups have to struggle to adapt the traditional Zaydism under the Republican state. The next chapter '(Nizari) Isma'ilism Reconstituted' contains the story of the Aga Khan and the Khojas. In 1866 the British court decided to appoint Aga Khan as the Imām for the Khojas. The Khojas had Shī'ī combined with Hindu rituals. Under the Imāmates of Aga Khan II (r.1881-1885) and Aga Khan III (r. 1885-1957) the British gained a lot of influence and helped the Imāmates with the dispersion of Shī'ī Islam to eastern Africa. They favored each other since the Imāms said that the British rule was positive for the country. So they both gained more influence, each in its own way. 'The Politicization of the Twelver Shi'a' is the last chapter of this section and book. Twelver Shī'īsm is mostly practiced in Iran, Iraq and Lebanon. On the day of 'Ashūrā (the tenth day of the Islamic month Muharram) the Shī'īs commemorate the death of Imām Husayn at Karbala. The Twelvers believed that when the disappeared Imām returns, he would avenge the murder of Husayn. Till then they have to be patient and just commemorate this special day. Ayatollah Ruhollah Khomeini (d.1989) asserts that a righteous leader should have knowledge of the law and justice. Khomeini battled for a new, post- revolutionary Iran. He stated: 'if the ruler is unacquainted with the contents of the law, he is not fit to rule'. (211) Furthermore, he stated 'the jurist (faqih) has authority over the ruler.' (212) Haider closes the book with a conclusion about Sunnī and Shī'ī Islam. In the conclusion he points out that the Sunnī and Shī'ī violence is tied up to worldly problems and consists of a competition between the two religious identities. He analyses for example that the al-Qaeda contains an anti- Shī'ī character as well since they consider Shī'īs as apostates.

For anyone who is interested in gaining more information about the rise of Shī'īsm, its concepts and background, this book is recommendable. The story is not only well structured, it's also very detailed. Haider categorically analyzed the principles of Shia Islam. It's not a book to provide people questioning its authority but the main purpose is informative and is written in a narrative form. Since this book provides detailed information about Shī'īsm and its differences with Sunnī Islam, it can be a suggestion to read for students who study religion and anybody else that is interested in religion. Besides that Shī'īsm is the second biggest group in Islam and the study of it should be indispensable in Islamic studies. It would also be a good reading for students who study conflict studies students who are interesting in conflicts in religion. There are many conflicts between Sunnī and Shī'ī Islam, but also in the three groups and subgroups of Shī'ī Islam claiming to have the truth. Haider succeeded in giving the reader a historical background about Shī'īsm and worked chronologically to Shī'īsm in present life.