Louay Fatoohi : Abrogation in the Qur'an and Islamic Law. A Critical Study of the Concept of "Naskh" and its Impact, 2013

Aysha A. Hidayatullah: Feminist Edges of the Qur'an 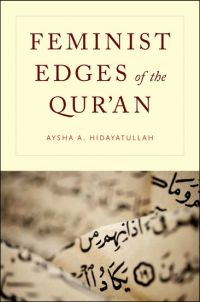 Feminist Edges of the Qur'an is one of those books that compels you to rethink one of the most fundamental questions in the study of Islam: How do we approach the word of God? These explorations may lead to a persistence of old ideas or to, as Aysha Hidayatullah calls it, a 'radical uncertainty'. Hidayatullah's book forced me to think about the manner in which to approach the Qur'an. The main question of this work is whether God's omnipotence and unity is starting point of tafsir or historical contextualization is the pillar of exegetical interpretation. Some verses in the Qur'an are difficult to understand in accordance with contemporary Western ideas about sexual equality. Do we have to dismiss these verses, as Amina Wadud does with regard to verse 4:34? (139) Or do we have to read these verses and make them in accordance with our worldviews? Hidayatullah, in Feminist Edges of the Qur'an, investigates these questions.

Aysha Hidayatullah, an Associate Professor of Islamic Studies at the University of San Francisco, gives an overview of the American feminist exegetical tradition of the Qur'an by referring to 20th century feminist scholars who contributed to this field of study. Hidayatullah's aim is to "synthesize and critically respond to the works of late twentieth- century and early twenty-first century female scholars engaged in feminist interpretations of the Qur'an." (3) In doing so she explores the works of five influential feminist Qur'anic exegetes from the United States: Riffat Hassan, Azizah al-Hibri, Amina Wadud, Asma Barlas and Kecia Ali. Besides the American women, the well-known South-African Sa'diyya Shaikh "who pursued her doctorate in the United States" is also included in the analysis. (8) In her book Hidayatullah shows the most important debates in feminist tafsir and eventually shares her thoughts and critical reflection on the works of the aforementioned authors.

According to Hidayatullah the different authors have "a shared genealogy in the lineage of modernist approaches to the Qur'an and their common use of three identifiable textual strategies and interpretive devices." (16) She elaborates on these strategies in the second part of her book. In the first part, which consists of three chapters, she covers more fundamental historical backgrounds and definitional problems. In chapter one, the author starts by placing modernist approaches to the Qur'an in the historical process of tafsir. "[T]he main tenets of modernist approaches to the Qur'an consist of the call for a modern revisiting of the Qur'an using scientific and rational interpretation." (31) This niche gives space to women's interpretation of the Qur'an distinct from the traditional male tafsir. In the second chapter the notion 'feminist' is investigated more closely. As Hidayatullah points out, the works that she uses are feminist because they "use a set of analytical tools to criticize male power and authority." (44) Furthermore, she discusses the concept of Islamic feminism to show that this concept does not have one particular meaning, as Ziba Mir-Hoesseini claims, nor that feminism is purely Islamic, due to its Western influences. (39) Consequently, further difficulties with Islamic feminism are discussed in chapter three. Here the author explores the relationship between feminist theologies and the state. According to Hidayatullah, Islamic feminist theology needs to free itself from both Jewish and Christian theology as well as from dominant white feminism. Although these forms of theology and ideology have influenced Islamic feminist tafsir, it needs to be free from these discourses to gain more authority among Muslims. Furthermore, female Muslim exegetes are considered allies of the state in spreading a more liberal Islam. (61) In short, this means that apart from a different (i.e. a traditional male tafsir) exegesis of the Qur'an, Islamic feminists - if they prefer to call themselves that - have to first establish their discourse next to, or above, the fields that undermine their tafsir.

In the second part of her book Hidayatullah pays attention to the methods and interpretative techniques, respectively the historical contextualization method, the intratextual method, and the tawhid paradigm. In the fourth chapter, Hidayatullah explains that when utilizing the historical contextualization method the verses of the Qur'an are read in relation to the context of revelation. (66) In the next chapter, the intratextual method, on the other hand seeks the relationship between different verses. The Qur'an is considered a holistic work, instead of atomistic as it is regarded in traditional tafsir. (88) The sixth chapter contains the tawhid paradigm which considers the attribution of maleness to God or the superiority of man over woman as an act of shirk by advocating the unity and omnipotence of God. (111) In this part of the book Hidayatullah pays most attention to Amina Wadud and Asma Barlas because she considers them first generation feminists. Therefore their works is an important source for the second generation, like herself. (8) In this part, however, the other authors seem to function as either examples or counter voices to the theories and thoughts of Wadud and Barlas. Because of the detailed descriptions of the works of these authors, this second part starts to feel like a summary of their books.

In the final part of the book Hidayatullah answers the interesting and exciting question of how to approach the word of God as a Muslim feminist. Build on the extensive overview of the works of the six feminists, she criticizes various aspects of feminist tafsir. Here Hidayatullah also writes that interpreters need "to take responsibility for [their] interpretative choices as feminist readers of the Qur'an." (149) She acknowledges that certain interpretations cannot be separated from the reader as well as the context in which the text is read. According to Hidayatullah, in this case the Egyptian scholar Nasr Hamed Abu Zayd offers a useful path by approaching the Qur'an as a discourse. (176) To regard the Qur'an a discourse means that the interpreter cannot speak on behalf of God, nor adjust interpretations of the Qur'anic verses to contemporary notions of gender, sexuality and equality. As the author writes: "My aim is to point out that even within a variety of interpretations, there are certain basic indicators of male advantage and control that persists in these verses." (161) In sum, the content of the Qur'anic verses cannot be totally in accordance with contemporary ideas about equality between man and women. In other words, only when some verses of the Qur'an are read in a dishonest way, namely trying to show something without sound evidence, the text can be used to preach God's social justice based on the equality between the sexes. To prove her point, the author refers to one verse in particular: 4:34, in which is stated that men are the 'maintainers of women' and that men are allowed to 'strike them' if there is a fear for 'marital discord'. Both this verse and the interpretation of Wadud are extensively discussed in the second part of the book, which in some cases leads to a overuse of the same quotes. For example the citation of Wadud "any kind of strike [...] violates other principles of the text itself - most notably 'justice' and human dignity, as Allah has led humankind to understand today," is used twice. (108, 165) These forms of repetition together with the imbalanced attention given to the six authors may give the reader the false impression that the book is more a summary than an argumentation. But the book's conclusion refutes this criticism. Hidayatullah mentions that she lived with the works of the feminist scholars for over a decade and became "unseated" by hearing the critical remarks Kecia Ali and Raja Rhouni have on the first generation Islamic feminists. (146) In this part of the book Hidayatullah writes in first person as she shows that some of the presumptions she made, such as considering gender equality part of the Qur'an, influenced the outcome of tafsir. Hidayatullah uses the repetitions as a way of building up her criticism. In the third part of her work Hidayatullah gives an outstanding reflection and reassessment of Islamic feminist interpretation of the Qur'an.

As previously mentioned, this book compels the reader to think about the nature of the Qur'an. "Radical uncertainty" perhaps seems an easy way out. One may say that if everything is uncertain we do not have to think things through anymore. But in the manner Hidayatullah considers it, radical uncertainty is a difficult position. One's beliefs and faith are not solid ground anymore. The scholar, the believer, and, in this case, the woman, have to embrace this radical uncertainty in order to interpret the Qur'an as honest as possible, and as Hidayatullah states: "to imagine new ways to achieve Islamically grounded justice." (193) This book is a comprehensive introduction to the American Islamic feminist debate. Besides that, it is also a thorough critical reassessment of this debate, because the author of Feminist Edges of the Qur'an does explore the edges of feminist tafsir and in doing so she makes the reader rethink those edges.