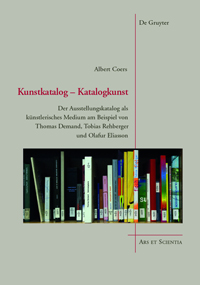 Kunstkatalog - Katalogkunst is the revised version of Coers' PhD dissertation (Staatliche Hochschule für Gestaltung Karlsruhe, 2012). The study focuses on the exhibition catalogue, stressing that in since the 1990s a new generation of artists have made it an essential and increasingly autonomous element of their artistic creation. Coers identifies the exhibition catalogues by artists Thomas Demand (*1964), Tobias Rehberger (*1966), and Olafur Eliasson (*1967) as the ideal case studies to highlight the multiple aspects involved in his thesis.

The book opens with a short introduction (1-13) where the author presents the exhibition catalogue not only as an instrument for the exhibitions and their critical and historical reception but also as a tool that, nowadays, any individual who intends to become a professional artist has had to reckon with. Exhibition catalogues determine the stature of artists, serving as a litmus test of their productivity and the desirability of their work. Nevertheless, they are neglected from an historical, ontological and epistemological point of view. Scholarly interest in exhibition catalogues lacks not only a language but a method and a shared criteria by which to analyze them. Contemporary artists implement the exhibition catalogue to redefine their work within the book format, thus controlling the public and social dimension of their œuvre. They are well aware that a printed publication outlives the exhibition, becoming increasingly autonomous. Referring to Gérard Genette's understanding of text and paratext, Coers affirms that contemporary publications issued within exhibitions and traditionally considered as exhibition catalogues should not be intended as paratexts of the show but actual texts - not secondary elements subordinated to the primary text, but autonomous œuvres to be interpreted as such.

Before engaging with a close reading of Demand's, Rehberger's, and Eliasson's exhibition catalogues, Coers devotes a short chapter (15-32) to the difference between an exhibition catalogue created by an artist and a so-called artist's book. At a theoretical and qualitative level, this differentiation proves to be very difficult. If one considers artists' books to be autonomous works of art and exhibition catalogues to be documents that attest and discuss the constellation of works presented in specific exhibition contexts, the problem is compounded further. After partially discussing the already scarce bibliography for the exhibition catalogue and the numerous studies on the artist's book and its definition, Coers resorts to quantitative parameters, e.g. the price of a given volume, its distribution, its being self-financed and self-published, its institutional positioning, and the quantity of artistic authorship invested in it. Actually, none of these parameters help. Paradoxically, he had already dismissed this theoretical and ontological diatribe quoting Johanna Drucker's controversial understanding of the artist's book - "a zone of activity, rather than a category into which to place works by evaluating whether they meet or fail to meet certain rigid criteria" (13). [1] To emerge from the impasse, Coers resorts to the etymology of the word catalogue, i.e. list. In his visual and textual anthology on the list, Umberto Eco distinguishes between pragmatic and poetic lists. [2] Pragmatic lists are finished enumerative catalogues of existent objects; poetic lists are catalogues of existent or fictional things praised for their value as signifiers which present a distinct artistic character. Both these lists refer to something. According to Coers, the difference between artists' books and "Künstlerkataloge" (25) would be that the latter are lists (not fully pragmatic, sometimes fully poetic, often a mixture of the two) which have one or more exhibitions as their referents. The chapter ends with a very brief historical overview of the newly founded typology of the artist's catalogue, from the XVII century to the 1990s.

The three main chapters of the book are respectively dedicated to the in-depth analysis of Demand's (33-102), Rehberger's (103-162), and Eliasson's exhibition catalogue production (163-226). During the 1990s and 2000s these artists experienced various models of authoriality and institutional support, reinterpreting the conventions of the exhibition catalogue. With critical and observational mastery, Coers succeeds in finding effective interpretative paths within their broad catalographic production. He selects representative examples of their approach to the exhibition catalogue at different stages of their careers, carefully describing the structure, the materiality, and the conceptual aspects of each publication. He also analyses the peculiar ways in which the books manage to be (or not to be) mediated representations of their respective exhibitions, situating them within the artists' Weltanschauung.

The analysis of Demand's work highlights how images have increasingly ceased to directly reference the works on display. His catalogues are often characterized by the presence of literary texts written by prominent authors. Since the 1990s these features seem to be common also to other artists. Rehberger's catalogues show how exhibitions could be graphically translated within the book format. In them the constant presence of installation views represents a double binding link to the physical spaces of the exhibitions. In the early 1990s, at the beginning of his career, Eliasson was skeptical vis à vis art publications. By the mid-2000s, he had even internalized their production within his studio. In 2009 he went so far as to dedicate an exhibition to the whole of his books. [3] According to Coers, Eliasson's Künstlerkataloge reaches the highest degree of autonomy from the exhibition. They are performative instruments through which the experience of Eliasson's projects are deconstructed. Within these books art is presented as something in constant transformation, closely interrelated with natural sciences, sociology, design and architecture.

The book ends with some conclusive remarks and the indication of some possible future lines of research (227-233). Throughout the rapid careers of their creators, Demand's, Rehberger's, and Eliasson's catalogues have become more impressive and challenging. Varied in sizes, materials, haptic qualities, graphics, and conceptual structures, they have increasingly become performative tools able to mediate the very process of artistic creation. This process involves not only the creation of the artworks on show but also many intangible aspects such as networking, self-promotion, and branding - nowadays constitutive skills of professional artists.

Although the discussion of the theoretical and historical aspects of the instrument of the exhibition catalogue is not always accurate, Coers moves nimbly in the wide book production of his three case studies, referencing also the practice of other contemporary artists. His brilliant analyses offer a clear understanding of the similarities and the differences among Demand's, Rehberger's, and Eliasson's Künstlerkataloge. Coers' study focuses on the medial characteristics of the catalogue, on the relationship between text and image, and on the concepts of authorship implied by the three artists. Listed by Coers among the future lines of research, an in-depth discussion of the socio-economic aspects of the books' production would have helped him to articulate his analysis even better. This volume has the merit of emphasizing the relevance and setting the stage for subsequent explorations of a whole slice of contemporary artistic production - until now - underestimated and taken for granted.