Bradley Ritter: Judeans in the Greek Cities of the Roman Empire 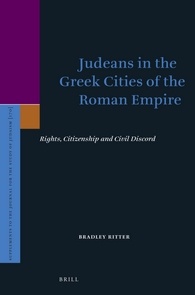 The situation of Judeans in the cities of the Roman Empire is far from a new topic in itself, but, as Ritter points out, has (perhaps surprisingly) not previously been the subject of a full-length study. This is the gap that the book aims to fill, considering Judeans' civic status, influence, relationship with their gentile neighbours and the institutions that formed the basis of their civic life: the communities in Egypt, Cyrene, Greece and Asia Minor, and Syria and Syria-Coele are each tackled in turn.

Ritter begins with a brief introduction to the question of the integration of the Judeans into their Diaspora environs, including a concise history of scholarship that focusses on the issue of citizen status and prior readings of key terms within the ancient sources (isopoliteia and politeia). Chapter 2 then provides an overview of these sources: Philo, Josephus and Acts. This is in general sensible, judicious and detailed. The Josephan section is perhaps over-long, including both comments on his individual works and a separate section on Josephus' discussion of Diaspora life: the majority of the chapter is thereby given over to a single author. Chapter 3 lays out what will be the key underpinnings of the book's arguments: conceptions of citizenship in the Hellenistic and Roman world (status, obligations and privileges), with an emphasis on participation in sacred and official matters; and associations in the Roman world as providing "meaningful comparisons" to Judaean proseuchai and synagogai (69).

Chapters 4 to 6 concentrate on Alexandria, setting out the "moorings" for Judaean life in this city specifically (citizenship, synagogues and the archons) before detailing the history of Alexandrian Judeans until the aftermath of the conflict in 38 CE. Ritter contends throughout that a significant number of Judeans had been citizens in Alexandria for a long period. His arguments on Philo's use of terminology (politeia and Alexandreus) are thoroughly referenced, clear and convincing: less compelling is his use of further evidence to support Philo's claim that many Judeans had citizenship, which rests on what he himself acknowledges is "a handful of cases" (89). This is not to discount Ritter's conclusion, but it should be noted that it is in fact based more on believing Philo than on corresponding evidence: such a slender number of other cases does little to outweigh previous arguments that "some" Judeans (as opposed to many) held citizenship in the city. Chapter 5 assesses the reliability of the literary evidence on the early history of Judeans in Alexandria, providing a rather nice sketch of their early history written entirely from the documentary evidence as a counterpart (113-121): Philo's account, Ritter argues, is not contradicted by this, though other literary sources are largely fictional. Chapter 6 then tackles the events in Alexandria in 38 CE, which Ritter convincingly defines as a stasis between two citizen groups, the purpose of which was to eliminate political opponents. Flaccus' ruling deprived the Alexandrian Judeans' of their citizen status, which was restored by Claudius: of note here are Ritter's arguments for the authenticity of Claudius' edict in 41 CE (AJ 19.279; 19.285) as predating the Letter of Claudius (P. Lond 1912 = CPJ 2. 153). The motives of the stasis and consequent tensions are also seen to lie not so much in the Judeans' failure to participate in the imperial cult, though this was emphasized in making arguments to Gaius, but in local concerns about the dangers involved in the broader expansion of Alexandrian citizenship at this time, and the failure of Judeans to participate in local cultic activities. Ritter is at his best in the second half of this chapter when arguing for his interpretation of the stasis, set firmly in the context of such incidents in other Greek cities. This approach allows him to draw out the prominence of citizenship as a distinctive and unusual theme, which will recur in his interpretation of other staseis between Judeans and Greeks.

The following chapters then move away from Egypt: Chapter 7 tackles Cyrene, Chapter 8 Asia Minor and Greece, Chapter 9 Syria and Coele-Syria. The idea of a constant debate about Judean citizenship status is denied; instead the point of tension was between local civic loyalties and those to the Judaean homeland. In Asia Minor, the objections of local Greeks are shown to shift from the denial of the very right of Judeans to gather to later foci on forced Sabbath court appearances and the collection of the Temple tax. Chapter 9 again sees the conflict in Caesarea as stasis (resulting in the loss of citizen rights for Judeans); furthermore, the mass murder in 66 CE, Ritter argues, was motivated by local sympathies for the murdered soldiers in Jerusalem and worries for security in its aftermath, rather than ethnic tensions. This episode is also seen as a key factor in consequent actions taken against the Judeans in this region.

The book is generally well edited and free from errors, with only the most occasional of slips ("Judeaism" (23); "Schurer for Schürer" (86, n.30); "Jewish" for "Judean" (121); a name has dropped out of 42, n.98 leaving us uninformed about whose "recent approach" is discussed). Inclusion of translations in the footnotes seems somewhat inconsistent. Helpful separate indices of documentary and literary sources are included alongside the General Index.

Ritter's primary argument - that Judeans enjoyed citizenship in their native cities much more broadly than has previously been acknowledged - is compelling, and deployed to good effect in reinterpreting key episodes in Judean history, thereby debunking the notion of a consistent campaign for citizenship. Instead, the main concern was the tension between the Judeans' observance of their own native customs and the perceived local obligations of citizenship (especially participation in local cultic institutions). While the observation of this conflict may not be new in and of itself, its role in the episodes treated is significant. Ritter's strengths lie in his close readings of his sources (resulting, in particular, in a more positive assessment of the value of Philo's evidence) and careful comparison with the broader Greco-Roman historical record, both terminological and conceptual. This is not to be underestimated, since it still often remains something of a desideratum in works on Judean history; furthermore, if these episodes are staseis, they perhaps deserve wider attention in works on the Greek city in the Roman period. The attempt to place the Alexandrian situation alongside other Diasporan communities should also be embraced as redressing the tendency to focus on Egypt and Egypt alone in matters of status (tempting, due to the bias of the evidence). Consequently, the monograph should be seen as a welcome addition, and indeed deserves to stimulate further discussion across fields.