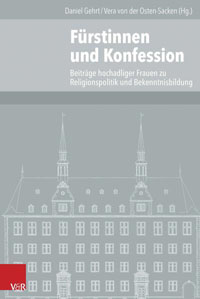 This volume, based on the papers presented at an international and interdisciplinary colloquium organised by the Leibniz Institut für Europäische Geschichte and the Forschungsbibliothek Gotha in March 2011, explores the role of ruling noblewomen (Fürstinnen) in shaping the confessional landscape of the sixteenth and early seventeenth centuries through sixteen essays. With one exception, the women considered here were the daughters, wives and widows of the rulers of German territories. The considerable differences between the situations and contexts of these women and that of this single exception, Elizabeth I, Queen of England from 1558 to 1603, are not discussed, and the inclusion of the article on Elizabeth's engagement with the Formula of Concord (also the only article in English) without any interpretative comment seems odd. It perhaps indicates that this volume came together more by accident than design: there seems to have been little attempt on the part of the editors to draw out the interesting themes which these essays, taken collectively, raise.

After a brief introduction, which does little more than name the Fürstinnen under discussion, the collection opens with a consideration by Heide Wunder of the need to assess the role not only of Protestant but also of Catholic Fürstinnen in shaping confessional identity. Maria of Bavaria, wife of Archduke Karl II of Inner Austria, and Renate of Lorraine, wife of Wilhelm of Bavaria, both played important roles in the re-Catholicisation of these territories. Katrin Keller compares the roles of the Lutheran Anna of Saxony, daughter of the King of Denmark, and the Catholic Maria of Bavaria, concluding that, regardless of her confession, the personal piety of the wife of a sixteenth-century ruler was always a matter of public life and politics. The analysis presented by Wunder and Keller offers an important balance to the remaining essays in the volume, which focus on Protestant figures or contexts.

Matthias Müller considers Lucas Cranach's representations of Fürstinnen but also his depictions of Judith, the biblical figure, as a Fürstin, a discussion, which could usefully have been related to the appeals to Judith in the writings of, for instance, Argula von Grumbach. Anne-Simone Rous discusses the role of Fürstinnen in arranging marriages, pointing to the importance of the intersection between the networks of a noblewoman's birth family and those of the family into which she had married, and observing that in matters of dynastic marriage, considerations of inheritance or even friendship could prove more important than confessional allegiance. A problematic aspect of this article is Rous's over-simple statement claim that Friedrich III (the Wise) of Saxony was unmarried: by passing over his morganatic marriage in silence, she misses a chance to consider the very tight definition of nobility which pertained in Germany at this period, with acceptable marriage partners needing to prove the noble birth of both their parents and both their grandmothers, and, as the sixteenth century progressed, also of their four great-grandmothers and eight great-great-grandmothers. Nobility was thus defined primarily through women's status, and, as Rous's article illustrates, this clearly posed some real challenges to the identification of suitable marriage partners as territories developed more closely defined confessional identities.

Turning to the influence of individual women, Siegfried Bräuer discusses Sibylle von Kleve, who in 1527 married Johann Friedrich of Saxony. Bräuer firstly considers Sibylle's education, which took place mostly before the Reformation but probably included humanist aspects, and secondly analyses the late-fifteenth-century prayerbook which Sibylle probably inherited from her grandmother. Bräuer concludes that this book could not have been used by a Lutheran Fürstin; however, although this was certainly true by the time of Sibylle's death, Bräuer's assumption begs some important questions about the formation of devotional practice in the late 1520s and early 1530s, the key years of the introduction of the Reformation into Saxony.

Inge Mager presents the writings of Elisabeth von Calenberg-Göttingen, who from 1540-1545 acted as her son's Regent. These included instructions to the subjects of Calenberg-Göttingen, to her elder son on his inheritance, and to her eldest daughter on her marriage, but also a biblical handbook for widows, collections of prayers and hymns, and a series of contributions to the Osiandrian controversy; they show Elisabeth to have known her Bible well, to have understood theological questions, and to have placed a strong focus on her responsibility to share God's word and her exemplary role in so doing.

Bettina Braun traces the influence of the Fürstinnen in the Palatinate from the 1530s to the 1590s, confirming the importance of marriage contracts and widows' lands (Wittum) in delineating what was possible for both wives and widows whether in confessional or economic terms; she concludes that that the Palatine Fürstinnen tended to exercise confessional influence via their husbands rather than directly. In contrast, the widow of Johann Wilhelm of Sachsen-Weimar, Dorothea Susanna, sought to exercise her rights of visitation and appointment in her Wittum, engaging in a legal battle with the Albertine Elector August of Saxony, documented by Hendrikje Carius. Moreover, as discussed by Daniel Gehrt, Vera von der Osten-Sacken and Ernst Koch, Dorothea Susanna also sought to shape the education of her sons and to ensure the Lutheran identity of memorials to her husband, drafting an Ernestine Lutheran confession of faith and writing hymns. There is considerable overlap between these four articles, which again might have benefitted from editorial comment.

Lothar Berndorff considers the contribution of Margareta von Mansfeld: orphaned aged 12 when her father, Ernst von Braunschweig-Lüneburg, an early follower of the Reformation, died in 1546, her guardians were the Catholic Archbishop of Cologne and her father's Lutheran successor. After the death of her husband, Hans von Mansfeld-Hinterort, Margarete sought to direct the education of her sons and to influence church appointments and visitations in the territory, which she ruled as her son's Regent. Berndorff suggests that the division of the Duchy of Mansfeld into small sub-territories may have made possible this level of engagement. Siegrid Westphal in contrast explores the situation of Anna of Pfalz-Neuburg after her son Wolfgang Wilhelm converted to Catholicism in 1613/14 and the differences between the situation of Pfalz-Neuburg, which Wolfgang Wilhelm inherited from his father, and Jülich-Berg, which Anna claimed on her son's behalf after the death of her childless brother. The councils of towns within Pfalz-Neuburg which wished to remain Lutheran appealed (unsuccessfully) to Anna, but despite pressure from both her son and the Bishop of Augsburg she was able to maintain Lutheranism in the capital of her Wittum, Höchstädt.

The final two essays focus on a later period. Andrews Waczkat discusses the contribution of Sophie Elisabeth von Braunschweig-Lüneburg to church music at the late seventeenth-century court in Wolfenbüttel, and in particular her support of Heinrich Schütz and his contribution to her own compositions. The volume closes with a consideration by Ute Gause of the confessional nature of the meditation on the Passion composed by the well-educated Henriette Catherine Freiin von Friesen, who was not a Fürstin in the sense of those discussed above, but whose poetic engagement, as Gause sees it, also represented an expression of and engagement for her own confessional identity.

This is a fascinating collection of essays, many of which, as their authors note, raise more questions than they answer. They show vividly the limitations of the opportunities open to even the most engaged Fürstin, and the challenges which faced women who sought to intervene in the rule of their territories. However - albeit probably inevitably, given the volume's subject - there is more than a touch here of the history of 'great women'. I would have liked to see more critical engagement with some of the themes raised by the material presented, and particularly with the question of the formation of confessional identity, either through a longer introduction or, perhaps better, through an afterword. Despite that caveat, this is a valuable collection, and these essays will help to make better known the influence of a group of women whose significance is only now coming to be appreciated.