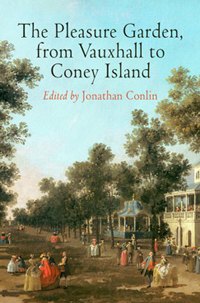 In the same way that architectural historians within the last forty years have broadened the scope of their investigations to include vernacular buildings, so too have landscape historians more recently looked beyond the bounds of the high style, designed gardens of the elite. The 1993 volume, The Vernacular Garden, edited by John Dixon Hunt and Joachim Wolschke-Bulman and published by Dumbarton Oaks decidedly marked the academic imprimatur on the study of landscapes previously neglected because of their lack of documentary evidence or presumed second-class status. The collected essays in The Pleasure Garden, from Vauxhall further demonstrate how these once overlooked sites stand now as a significant field of inquiry not only on the part of sociologists and antiquarians but also by scholars whose areas of expertise lie in the fine arts.

For those unacquainted with the term, a European pleasure garden refers to a privately owned, enclosed, and designed landscape area into which the public was admitted for a fee. First appearing in England in the seventeenth century, these landscapes of pleasure and performance could be found soon thereafter on the Continent and in the United States well into the mid-nineteenth century. As the editor Jonathan Conlin explains in the introduction, the definition of pleasure gardens or variously, pleasure grounds, was not fixed precisely. He argues, however, that the first commercial seventeenth-century pleasure gardens had their origins in the more exclusive cultural performances of gentility set within private country house estates where privileged guests, who visited by invitation only, marveled at and expressed admiration for the owner's presumed superior taste in landscape design. In doing so, guests likewise demonstrated their own elevated understanding of the aesthetics of nature.

Unlike privately owned pleasure grounds, pleasure gardens like those found at Vauxhall, Ranelagh, and Cremorne Gardens in London, were decidedly more commercial in purpose and design. Early English pleasure gardens were usually first sited on the periphery of an urban area in order to take advantage of their associative values of pastoralism. They were open only in the warm weather season and during the afternoon and evening hours. They attracted paying audiences of various degrees of presumed gentility with lovely displays of garden designs and plantings that were intending to prompt and encourage promenading among tree-lined gravel walks. Visitors were entertained by a heightened auditory awareness of either the birds in the planted groves of trees, or by the orchestra playing in the band shell, and later by professional singers. They could also dine in semi-enclosed boxes ornamented with meaningful and colorful scenes by significant artists. Pleasure gardens were meant to attract the visual and auditory senses. As various pleasure gardens waxed and waned in popular appeal, wiser owners altered the amusements within their walls. Those who failed to attend to public sentiment went out of business. Consequently, these venues can serve as barometers of evolving popular taste both in terms of their divertissements and also their designed settings.

The editor claims that this volume is the first to address the pleasure garden as an international phenomenon, and authors in this anthology do mention pleasure parks in France and Germany. However, the essays really are focused only on pleasure gardens in Great Britain and the United States of America. While confined to English-speaking examples, the reader is invited to comprehend the pleasure garden from a variety of methodological approaches. This volume consists of a thoughtful introduction and nine chapters written by historians of landscape, culture, urbanism, art, theater, architecture, and English literature on the subject of the pleasure garden.

In terms of chronological scope, this book ranges from the seventeenth- to the early twentieth-century. Chapters include topics including the role of pleasure gardens in the larger history of designed landscapes, their role in urban development, and the role in facilitating social and cultural performances. Art historians will be particularly attracted to two chapters: Eleanor Hughes' discussion of the patriotic images Peter Monany created for the supper boxes at Vauxhall, and Anne Koval's analysis of Whistler's paintings of Cremorne Gardens. This collection actually contains relatively little text directed specifically to garden design or architecture. In his introduction, Conlin summarizes three phases of development in the physical appearance of pleasure gardens in a few number of pages. We also get some sense of space and design in the excellent John Dixon Hunt and Peter Borsay essays.

Several themes run through many of the essays. First, authors address the extent to which pleasure gardens were, like coffee houses, sites where citizens could socialize as if class and rank did not matter. Second, pleasure gardens served as sites for the performance of cultural capital. Third, pleasure gardens provided not only the location for genteel promenading and dining, but places, such as the notorious Dark Walks at Vauxhall, for illicit sexual encounters. As Deborah Epstein Nord notes, pleasure gardens could function as masquerades.

The title of this volume is somewhat deceptive, for although there is abundant material on Vauxhall, there is very little on Coney Island. Coney Island is used here rather more as a convenient general reference to American-style amusement parks at the turn of the twentieth century. As we read in Josephine Kane's chapter on Edwardian amusement parks, American predecessors with their emphasis on mechanical thrill rides did indeed have a strong influence on the reshaping of British pleasure gardens. Yet, those looking for information about the parks at Coney Island per se, will need to rely on the other considerable scholarship on that topic.

The book is illustrated with black and white reproductions maps of gardens, city maps, musical scores, photographs, popular prints, and ephemera. The publication of color illustrations is admittedly a costly endeavor, but one longs to see at least a few color images that would provide a better sense of the liveliness and excitement that visitors to pleasure gardens found so attractive. Because the book is an octavo, the reader may find the half-page maps difficult to decipher. Even when guided by captions, the print on these tiny maps is not legible. Moreover, it would have been more helpful to have all the illustrations consistently keyed to text.

The scholarship in this collection of essays is excellent and the selected bibliography will guide readers to other significant publications on the subject. Those just beginning to investigate this topic, however, might want to start with a volume focused on a single example, such as David Cole and Alan Borg's richly illustrated and exhaustive study, Vauxhall Gardens: A History. Understanding Vauxhall Gardens in depth first would likely make the essays in this collection all the more enlightening.