Michael A. Reynolds: Shattering Empires. The Clash and Collapse of the Ottoman and Russian Empires 1908-1918, Cambridge: Cambridge University Press 2011 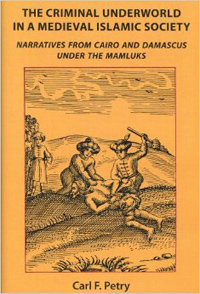 Some time ago, the field of Mamlukology ceased being an isolated niche for medievalists, evolving instead as a rapidly growing subgenre of Islamic historical studies in the 21th century. Aided by a growing array of newly-discovered primary sources, Mamlukists continue to develop each year thought-provoking and engaging monographs that manage to shed light even for students struggling to understand the Islamic world of today. A prime example would be Carl Petry's most recent project.

His Criminal Underworld represents an attempt to provide readers with something approaching an objective "performance review" of the Mamluk regime's dealings with transgressions against religion and the public order.

By the end of the book, Petry introduces us to a wide assortment of troublemakers from the Mamluk era. Of course, Mamluk ideas of "criminality" often did not coincide with concepts prevalent today. After beginning the discussion on crime and introducing his sources in the first chapter, the second chapter, while focusing on riots, revolts, and arson, illustrated by examples, delves into the insights such incidents provide on the perpetrators themselves. Chapter three focuses on bandits and brigands and, according to the author, demonstrates the chroniclers' belief in the absence of security provided by the regime. In chapter four we also learn of bureaucrats who steal from the awqaf and other public funds, as well as the dealers in alcohol and flesh and other fomenters of public indecency in chapter five. Of course, in chapter six, we cannot forget the blasphemers, the apostates, or the heretics and phoney prophets. In the seventh chapter, the author provides us with a lengthy study of homicide in its various manifestations among all classes of a medieval Islamic society, as well as a much-needed discussion on the actual role of "blood money" during the period under study. In chapter eight, we pass by the so-called "smart" criminals including spies and counterfeiters. The ninth chapter discusses the state's regulation of criminal activity and prosecution of criminals.

In the final chapter of the book, Petry delivers his "summary reflections" which tie up the author's "reflections" offered at the end of each preceding chapter. Petry reiterates the point that many of the Mamluk chroniclers charged the ruling elite with being complicit in the wrongdoing that ailed society.

Petry is able to reconstruct his Mamluk-era crimescape mainly via the chroniclers who are his sources. Some of them provide terse reports of criminal activity requiring considerable reading between the lines, but there are also numerous examples of lengthier passages with details about individual criminals chosen expressly by the authors to shock and outrage the readers of their time. As the author acknowledges, the data extracted from the sources do not lend themselves to statistical analysis, though Petry occasionally resorts to taking medieval European or later Ottoman analogues as plausible guides into areas where the Mamluk historical record appears to fall silent.

Even so, Petry adeptly approaches broader questions about crime and justice under the Mamluk regime. He makes an important observation that the chroniclers he studied (nine are mentioned by name) were often reporting about alleged rampant criminality and corruption to demonstrate that the elite were "soft on crime" and worse still, profited from illegal activity. This was a serious accusation against a regime that consistently held itself out as a staunch defender of the Muslim community.

Petry points out that identifying something as criminal activity in the medieval period is always the prerogative of the narrators, who, as "onsight observers" are more entitled to identify crime based on current social norms than we modern observers with our own understandings of crime might be. In other words, something was a crime simply because medieval Islamic society perceived it as such.

While the study offers rich imagery from the Mamluk chronicles, it does not weigh many other potentially useful sources such as fatwa compendiums, documents, or normative juristic writings on crimes denounced by the Sharia.

If indeed the Mamluk chroniclers included scandalous and often ghastly anecdotes to "spice up" their narrative presentations, then Petry's work has isolated and presented a great number of them to us in one place as a spicy main course. On an aesthetic note, the book has great appeal even beyond the field; it is a well-written and accessible page-turner that offers the reader a vivid flight through the seamier side of Mamluk life outside the Citadel. While serving as an introduction to the nature of Mamluk historiographical writing (in translation), the book would also be an excellent assignment for undergraduates interested in the flavour and grit of a pre-modern Islamic society. In addition to contributing to the discourse on crime, authority, and punishment in the Mamluk period, Petry's Criminal Underworld paints a colourful picture and often leaves the reader with the sensation of eavesdropping on salacious court proceedings, or even stumbling onto a grisly crime scene, unable to turn away.