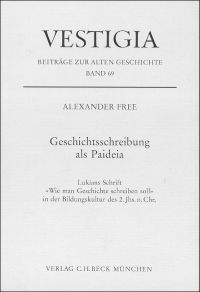 Lucian of Samosata's De historia conscribenda (Historia) is a short epistolary treatise castigating the literary offenses of a set of historians who have ostensibly emerged in the wake of a recent war. It also offers precepts for how one should write in this genre, although the second-century-AD satirical author never himself made such an attempt. It has traditionally received much attention because it is the fullest stand-alone methodological discussion of historiography surviving from antiquity. It has therefore been read as a largely derivative outline of conventional expectations, providing a useful interpretive key for the whole genre in the Hellenistic and Roman periods. [1]

This illuminating new study by Alexander Free, based on a dissertation from LMU-Munich, builds on the newer approach of connecting the text to key themes that recur through the rest of the Lucianic corpus. In Free's case this means particularly those of competitive paideia and the correct application of common sense (gesunder Menschenverstand). In his view the treatise aims not to describe an ideal text or literary praxis, but rather an ideal author and ethos modelled above all on Thucydides. A historian who meets Lucian's requirements and follows his prescriptions will gain literary glory among his peers and posterity, and will display a knowledge of human affairs that will make him useful in the political sphere.

Free's introduction briefly positions his argument within current Lucian scholarship, which is remarkably divided in its approaches, and lays down some interpretive premises without extensively arguing against those who disagree. Most importantly, Free separates himself from two common approaches to Lucian, these being a deconstructive reading, in which Lucian is a purely satirical author who parodies and critiques the cultural scene without advancing an agenda of his own, and an identity-based reading that stresses Lucian's Syrianness and the ambivalent perspective he offers as a partial outsider to Greco-Roman elite culture. Free's Lucian is using satire to communicate affirmative ideas about his intellectual and literary world, and is a basically representative figure, who can "als ein typisch kaiserzeitlicher Gebildeter gelten, der sich in vielen Aspekten in die Lebenswelt des 2. Jhds. einordnet." (11)

The main body of Free's argument moves from the specific to the general. His Chapter 2 on "Geschichtsschreibung als Paideia," briefly (24-33) sets out his model of a world of competitive erudition in which each author is trying to embody the role of pepaideumenos while consigning his rivals to that of idiōtēs. There then follows a discussion of the relative influence of Thucydides and Polybius on the Historia, reaching the key conclusion that the former is the primary model, and that Lucian's ideal historian more resembles a Thucydidean shrewd observer than a Polybian man of action (40-53). The implications of this are explored in the rest of the chapter, which concludes with an important discussion (84-104) of how the stylistic and generic precepts of the Historia promote the larger ethos of truth-telling and giving useful advice, in particular because of the close Thucydidean relationship between clarity (to saphes) and truth (alētheia).

Chapter 3 on "Historia zwischen Fakt und Fiktion" places the Historia in the context of Lucian's whole corpus. Free looks in particular at texts such as the Verae historiae, De dea Syria and Philopseudēs in which Lucian embraces (in Free's view wholeheartedly if self-consciously) a Herodotean form of storytelling very different from what is seen in the Historia. Rather than trying to force consistency on this material, Free convincingly reads the various texts as complementary parts of the same didactic project exploring the relationship between truth and lies (168-72). This is leads on to a complicated final argument (172-78). In Free's view, the Historia can on one level be read as a straightforward technē describing an ideal form of true narrative exemplified by Thucydides. As it turns out, however, such a narrative is impossible in the world of self-interested flattery in which readers actually live: thus the Historia functions rather as an entertaining and self-critical but still instructive reflection on the failings of a society in which its intrinsically laudable precepts cannot be realized.

The last chapter, on "Die Geschichtsschreibung der Adoptivkaiserzeit" aims to place the Historia in Lucian's literary and historical context. This means dealing with the many modern readings that have wanted to identify the various "bad historians" Lucian criticizes in the Historia with known figures, notably Arrian. Free is skeptical in this regard: his Lucian is writing lasting instructive material rather than ephemeral polemic. The second half of the chapter tries to find commonalities between Lucian's methodological outlook and that of surviving Antonine and Severan historians, especially Arrian and Cassius Dio: on this last point Free's claims are somewhat overstated. The conclusion is a useful summary of the earlier arguments, and is followed by an index that argues cogently against the interpretation that sees Lucian as contributing to an ongoing genre of Peri Historias literature going back to Theophrastus.

As an overall reading of the text, Free's book is coherent and insightful, and he gives the most convincing explanation of any scholar yet how a single author could have written the Verae Historiae and the Historia without meaning either one as parody or frivolity. If there is a coherent and serious agenda behind the Lucianic corpus, then that agenda must relate to the nature of truth and how one expresses it in a world that is basically hostile to such expression. Free does much to aid our understanding of such an agenda.

In its cultural-historical aims, the book's success is more mixed. Free convincingly shows how Lucian portrays a social elite in which pepaideumenoi compete for prestige by exercising rhetorical and intellectual virtuosity within an established set of literary canons. But the bridge between textual and social reality is none too solid, and Free's Greco-Roman elites in C4 often seem to be playing a closed formalistic game in which writing "correct" literature automatically translates into social prestige, irrespective of the political content being described. The earlier chapters are also somewhat hampered by an overly strict dichotomy between "Thucydidean" thought and its "Polybian" (in C2) and "Herodotean" (in C3) counterparts. The counterpoint is a useful heuristic device, but some of Free's arguments rely too heavily on Lucian sharing a particular reading of these classical forerunners, and it would have been better to consider Lucian's precepts in themselves rather than through such narrow lenses.

These limitations do not, however, detract from this book's important contributions to Lucianic scholarship and intellectual history. It has a commendably full bibliography and engages fully with the literature therein. [2] Students of the construction and role of literature in the High Empire will find much here from which to profit.

[2] Though it would have been useful to consult W. A. Johnson: Readers and Reading Culture in the High Roman Empire: A Study of Elite Communities (Oxford; New York, 2010). The only significant typo I noticed is also bibliographical: Jane Lightfoot's surname is consistently spelled "Lightfood."