Paulina B. Lewicka: Food and Foodways of Medieval Cairenes. Aspects of Life in an Islamic Metropolis of the Eastern Mediterranean, Leiden / Boston: Brill 2011 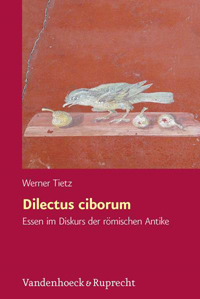 The phrase dilectus ciborum can be viewed as a pure Latin equivalent for the more familiar Greek term gastronomia. The cover illustration is a vignette of a beccafico (Gartengrasmücke), doing what beccafichi and gastronomes do, from a wall painting at ancient Oplontis. This book needs its subtitle, therefore, because it is not really about gastronomy at all. Instead Werner Tietz explores the meanings and undertones of food in Roman literature. In this context 'discourse' is necessarily written discourse: we have, of course, no direct access to real spoken discourse around and about the food of classical Rome.

In its initial form this work was Tietz's Habilitationsschrift, submitted in 2009 to the University of Munich. As revised for publication it is a comprehensive exploration of its subject, well-argued and fully footnoted. After a short introductory chapter discussing definitions, methods and previous scholarship, four substantive and long chapters follow.

The catch-title of chapter 2, 'Quando ita maiores voluerunt', is glossed as 'eating as symbol in the discourse of the mos maiorum'. Appeals to mos maiorum ('ancestral custom') were typical of Roman literature, and ancestral foods such as puls ('porridge') were commonly-used tokens in such verbal exchanges; satire crept in with references to ancestral onions and garlic. That crucial topic having been dealt with, chapter 3 explores culinary symbols in Roman society, with three subdivisions: first, on the elite and on food as the bearer and communicator of prestige; second, on food as a social marker of the underclass; third, on redistribution and exchange of foodstuffs in the form of gifts.

Chapter 4, which is the shortest, is on food as a communicator of differences and dichotomies, geographical and ethnic (Jews, Greeks, 'Orientals' and nomadic peoples).

Chapter 5, much longer, treats food in the discourse of transgression. Foods may firstly be metaphors for sexuality and sexual acts; they may be aphrodisiacs, love gifts, violations. (Whether aphrodisiacs are symbols only, or realities, may rest on the reader's opinion.) Foods may secondly be inadequate or sufficient to satisfy hunger. Finally they may be superfluous and disgusting, and this issue is handled in the third, more desultory section of chapter 5, which also covers topics as disparate as the food of animals, nurslings, slaves and cannibals. If the reader suspects that the third section of chapter 5 was necessary mainly for the clearing up of Tietz's database, the suspicion is unworthy. It was also necessary if Tietz was to provide the truly encyclopedic survey of the symbolism of food in Roman literature that he has in fact provided, rounded off with a very short summary chapter, a bibliography, and indexes of names and of foods.

The index of names includes literary characters such as Horace's imaginary foodie Nasidienus and Petronius's fictional freedman Trimalchio, but there is no index of ancient authors. Readers may like to know which authors are most often discussed. This can only be an impressionistic list, but Horace (late 1st century BC) is more often footnoted than any other author, with particularly frequent reference to his Satires and Epistles (the Odes offer plenty on wine, but there is no special focus on wine here). Next follows a varied series of Latin authors from Plautus (early 2nd century BC) by way of Cato, Lucilius, Virgil and Ovid to Petronius, Juvenal, Pliny the Elder, Martial, Tacitus, Suetonius and Apuleius (early 2nd century AD), and then onwards to three later authors of special relevance to food studies, Athenaeus, Macrobius and Apicius. My impression is that Tietz found little in Cicero, very little in Catullus and Propertius, and extremely little in Greek authors contemporary with the Latin authors named - but that, overall, he was looking in exactly the right place and cast his net wide enough to achieve a true and balanced view of his chosen subject.

Tietz, then, has trained his eyes not on food tout court but on food in discourse. I, as reviewer, must admit that I have generally treated Roman written discourse as a historical source or as if it were my anthropological informant: I have tried to see real food and real social behaviour through the medium of Greek and Latin texts. My very different approach to the same material may have coloured my first reading of Tietz's work, placing an undue importance on simple questions such as 'what food was this, anyway?' - a query that came into my mind when, among aphrodisiacs, Tietz mentions 'Zwiebel (bulbi)' (287), and lists it simply as 'Zwiebel' in his index of foods. As he surely knows if he has visited southern Italy or Greece, bulbi are the bulbs of the tassel hyacinth (schopfige Traubenhyazinthe): it is this, and certainly not the everyday onion (cepa), that had an aphrodisiac reputation to which several Latin authors allude, most amusingly Varro. [1] These questions matter even in the context of Tietz's enquiry, in which the handy but slightly vague term 'Zwiebel' risks concealing the distinction between two Latin words with extremely different undertones. There is nothing erotic about onions, as he shows elsewhere with an apposite quotation from Horace (88).

Such quibbles no longer distracted me as I re-read, and they need not distract other readers. In the tradition in which, I would say, Emily Gowers was the prophet with her well-titled The Loaded Table (Oxford, 1993), Werner Tietz, with his more wide-ranging Dilectus ciborum, is the interpreter for the 21st century. If I add that I found the interpreter easier to read than the prophet, Emily will surely not be offended: she never set out to be easy to read!