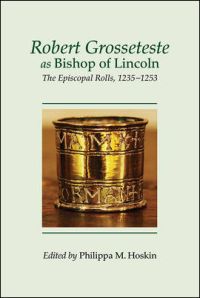 In this impressive edition of 'The Episcopal Rolls of Robert Grosseteste', Philippa Hoskin catalogues, lists and explains the documents pertaining to his episcopate of Lincoln between 1235 and 1253. Philippa Hoskin, Professor at the University of Lincoln and an expert in medieval ecclesiastical history, takes this opportunity to provide an extensive study of the overlapping areas of interests between ecclesiastical and lay society in the diocese of Lincoln and an overview of the documentation kept by episcopal chanceries.

A detailed introduction gives a clear explanation of the book's organisation and the editorial method, as well as providing the historical background necessary for an understanding of the importance of the documents included in this work. The comparison between Grosseteste's rolls and those made and kept by his predecessor, bishop Hugh of Wells, is particularly illuminating. The institution rolls of the Wells period (1209-1235) were usually completed by the so called 'charter rolls' which included different documents, such as copies of letters of institution as well as disputes and formal notification by the bishop. In the transition between Hugh of Wells and Robert Grosseteste the charter rolls system had been set aside. The Hoskin edition of the episcopal rolls reflects this transition and also explains Grosseteste's chancery method of entering the charter rolls on the dorse of the institution rolls.

The Hoskin edition presents three important layers of analysis; all entries are divided archdeaconry by archdeaconry and within each of the eight archdeaconries of the diocese a further partition is in place between institutions and documents previously called charter rolls here named 'Institutiones et carte', the latter placed at the end of each archdeaconry section. Finally, every document or entry is catalogued in chronological order, according to Grosseteste's pontifical years. The distinction between entries and documents attached to them is particularly important for the study of the relationship between the ecclesiastical entourage and the lay community. Indeed some of the documents included in each section named 'Institutiones et carte', deal with arrangements in relation to private chapels and chantries, as is the case, for instance, of the knight Peter de Ral and his wife in the archdeaconry of Northampton (entry no 939).

By dividing and studying the entries archdeaconry by archdeaconry Hoskin is able to point out the different hands who recorded the entries and in some cases even the difference between the ink used to make all of these entries, allowing an understanding about what work had been done, when it was abandoned and what was added or changed. Another interesting feature of this edition is the inclusion of marginal notes, which had been omitted in the previous edition of the rolls. Most of them are references to missing letters of presentation or inquisition and even in one case the institution of a head of a religious house. In this respect for instance the entry recording the institution of Alan, chaplain, as rector of Woodhall, is completed by an underwritten note explaining that on the membrane there is a right marginal note saying: 'letters of presentation are lacking' (entry no 7).

In Hoskin's analysis Grosseteste's method of record-keeping seems to have been less effective or probably less detailed than that of Hugh of Wells and this seems to have been the effect not of negligence, but rather of the importance Grosseteste attributed to pastoral care. Hoskin's investigation suggested a less centralised system of record keeping given the responsibility Grosseteste gave to his archdeacons in terms of moral obligation towards the spiritual well-being of their parishioners. Despite this, Hoskin's examination of the entries has enabled her to identify some common themes, which are also highlighted in the introduction. Issues of pluralisms, (no 22, note 25, and nos 90, 303, 318, 886), non-residency (no 777, note 128) and illiteracy (nos 371, 756, 850, 861, 863 and 995) are all well testified in the rolls throughout archdeaconries; however, what emerges most clearly from the entries is Grosseteste's view of diocesan visitations, which he saw as occasions to save people's souls. Although Hoskin claims there is no direct connection between Grosseteste's visitations and the increase in the number of clergy being removed from their positions, numerous incumbents were removed or placed under investigation because of unchastely lives, incest with their spiritual daughters (parishioners) or because being married (nos 856, 1487).

Most of the entries in Hoskin's edition are supplemented by footnotes explaining names, places, roles of the incumbents, as well as ecclesiastical position and historical background based on primary and secondary sources, allowing not only a detailed analysis of the particular position held by a specific incumbent, but also a comprehensive socio-political picture of the general situation within the diocese. Last but not least, the book is completed by two appendices. In the first appendix Hoskin presents the itinerary of bishop Grosseteste within and outside Lincoln diocese from the year of his election, 1235, until his death in 1253, which is particularly useful to determine his whereabouts during his pontificate. The second appendix tabulates the position of entries on the face and dorse of the rolls by pontifical year, adding some more interesting elements for studying and understanding the way in which these entries were made and kept.

This important edition will prove indispensable not only to scholars working on the diocese of Lincoln but also to anyone interested in episcopal rolls and registers and their evolution.